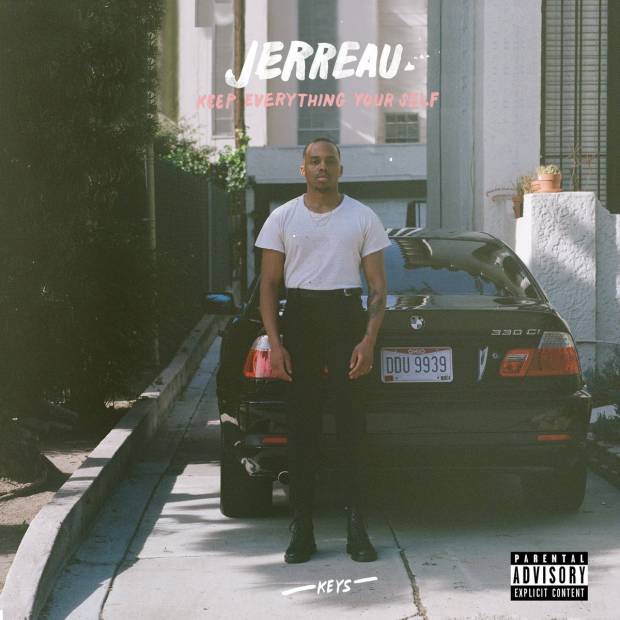 With every new album release week, there’s always one that doesn’t get talked about enough in rap conversations. “You heard that new?” could be applied to February releases from Russ, Lil Wayne, Pop Smoke (RIP) or Royce Da 5’9 because their popularity usually means it’s a higher priority on your listening list.

When an artist like Jerreau, a rapper formerly of the trio Fly.Union, decides to drop new music, he has to figure out how to cut through the noise and be heard in the streaming era. Even with his foundation from the Columbus, Ohio group and earning a dedicated following for his solo material, Jerreau is still very much a new artist trying to find his moment.

If you’re a fan of LeBron James, you know he’s been bigging up Jerreau’s music for years. Back in 2016, around the time he dropped Never How You Plan, Bron gave him a co-sign on Instagram for his track “Really Got It.” It was a major look for Jerreau, as that song became part of Beats’ “B [READY]” campaign and was a theme song for the Cleveland Cavaliers during their winning 2016 NBA Finals run. Even when LeBron joined the Lakers and grew into his tastemaker role in Hip Hop, he and Jerreau maintained a solid friendship. But that doesn’t mean Jerreau’s fame solely lies in being friends with one of the biggest basketball players in the world.

Headed to get that work in on our day off bumping the homie @jerreau new LP "Never How You Plan". What's a day off though!?!? Let's go people. Don't let nothing stop u from having fun, working hard and smiling! #StartingHoopingForTheNikeCheck #StriveForGreatness #RWTW #NIT

In the last four years, Jerreau has been off the music scene finishing KEEP EVERYTHING YOUR SELF, his sophomore effort dedicated to his friends and family. At the end of 2019, he was still writing the album, deciding to keep the February 6, 2020 release date because “the conversations I’m having, the questions, and the emotions are too relevant.” The delay was also due to him finding his voice again, meaning the messages had to align with him in his present state. KEEP EVERYTHING YOUR SELF is another consistent output from Jerreau, hitting the sweet spot of straightforward bangers while opening up more about his personal life, specifically dealing with death and how it’s affected him. The album, shortened as KEYS, is successful in showing Jerreau isn’t someone you should overlook and that he’s very capable of reaching a larger audience with his music if given the right opportunity.

On the latest episode of The Rap Pack, Carl Chery, Trent Clark, and Jon Tanners wanted to spotlight an artist that doesn’t get brought up a lot. On the topic of Jerreau, Chery explains his lyrics as “reliable because its everyman rap, it’s not gangster rap.” Hip Hop is such a wide spectrum today that what sticks to the listener could be anything between the grimy styles of Griselda to the melodic sounds of A Boogie Wit Da Hoodie. That’s why Jerreau plays in the middle; he’s both a lyricist and can make anthems with sticky hooks, showing that you only need a solid pen game to earn respect.

He opens with “TOO DEEP FOR THE INTRO,” filled with slick-talking bars and boasts on being his own boss. Some are definitely IG caption-worthy like “I get fully dressed just to work from home,” and others establish how working on yourself is still the mantra in 2020. “Nail shop, sippin’ champagne with my feet up/ self-care, take care cause they need us/Keep hands clean cause nobody gon’ feed us,” he raps.

In both sound and presentation, Jerreau has adapted the Fly.Union formula and made it his own. KEYS is mostly produced by New York producer Nyrell, who did eight songs, giving the album’s moody and soulful aesthetic. Chucky Supreme, Glassc!ty, Sandy Benjamin, and P!!’s contributions work well within Jerreau’s introspective world. This is an album made for wintry Ohio nights. But the back half is Jerreau’s best work, where his potential really shines on “JOY” (featuring BJ the Chicago Kid), “HEAD AND SHOULDERS,” “PARIS DREAMS,” and “BANKREAU.” He’s challenged himself to expand his sound, expertly switching from a Ludacris’ “Pussy Poppin’” type of record to owning an H-Town, syrup-sippin’ influenced cut.

There is no limit to where Jerreau’s music is drawn from. When he does venture into different regions, it’s highly enjoyable.

However, what limits Jerreau is where he sees his place in the rap game. Rappers are naturally confident, but it’s unclear if he’s an underdog or a bigger artist in his mind. On “SAME TEAM,” he imposes the “if you know, you know” mentality about his reputation: “Anything I bring to the game, don’t show up on stat sheets/The hood fuck with me, my business be tax-free.” And this is after reminding everyone that he used to be a “team sport” but now he’s “Iso-ball.” “RIDE DEATH” mentions Kobe and LeBron in a manner that sounds like he has mixed feelings on his own level of fame. “I don’t play fair, where they do that at?/You thought you was Kobe, they don’t love you like that/I lost it all and I got more back/Had machines back to back like a laundromat/Bron drove four hours just to hear me rap, never forget that/I feel good about where I’m at,” he spits.

What will take Jerreau far is how honest he can be in his music. To be on a level of Drake, Kendrick Lamar, or J. Cole, you have to be able to balance authenticity, know your lane, and connect with your fans in a way that’s accessible. On several of the songs on KEYS, Jerreau makes references to being black and his experiences with police harassment, utilizing his platform to address real issues that continue to make nationwide headlines. You wish Jerreau went for an entire song instead of a few lines here and there because it would’ve been very effective and meaningful as a young artist to speak up.

“BLENDED FAMILY” is the best example of Jerreau rapping about one subject matter, painting a picture of growing up with his family in the ‘hood and facing various hardships. “Still rappin’ and shit like we about to be on/I pick myself up, nobody put me on/lift as you climb, clean as you cook/Write my story as I go/Easier than it looks,” he raps.

Overall, Jerreau wants you to examine yourself and your journey. “Be self-aware, walk in your purpose and the process is streamlined,” he writes on Instagram. “Because if you don’t, what quality of life will you have? I want one of fulfillment.” KEYS reminds you to keep everything yourself, to get up and work hard towards your goal without any doubts. Jerreau was able to get closer to his goal with KEYS, but he’s not quite at the next level yet. He’s still building it, brick by brick.