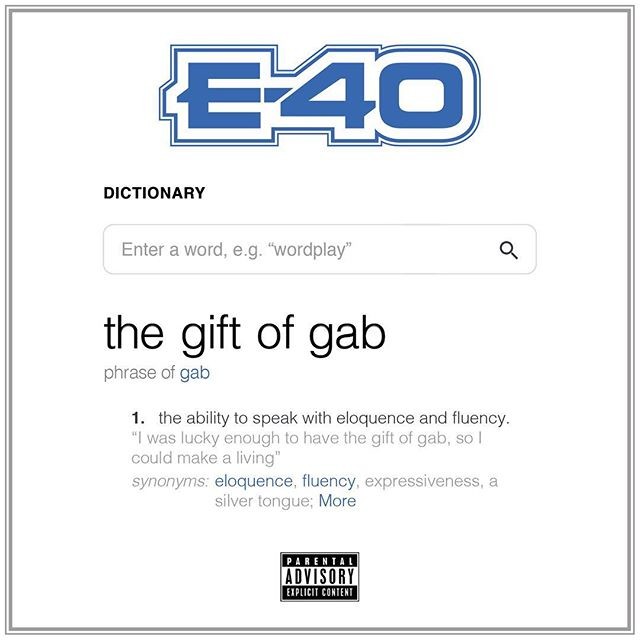 Rap legend E-40 is undoubtedly in a league of his own. When an artist becomes a legacy act, however, there’s a risk that their new music will start to lack allure. His 2016 release, The D-Boys Diary, was muddled by its bloated length. But on The Gift Of Gab, his 25th solo album and the first part to his The Definition Series, the Bay Area legend takes a more focused approach by delivering a dozen mostly successful songs that occasionally push his sonic boundaries.

The album opens with “Ballhog” a by-the-numbers hyphy banger that features a wonky bass, E-40’s clever rhymes, and a minimal chorus from Stressmatic. The veteran MC reminds his audience of his larger than life quirkiness with oddball bars like, “Hallelujah the Lord blessed me with gouda, you can find me on vacation in Barbados or Aruba.”

A good chunk of the tracks refines this classic, hyphy energy. While songs like “Who You Talking To” and “Wicked” are bangers, “Winning” shows the limits to the formula. The repeated sample of someone saying “winning” is blaring and obnoxious, stealing the thunder from E-40’s much more vibrant energy. (Not to mention “Choices (Yup!)” still goes and a clone wasn’t needed.) But when it comes to landing punchlines and accentuating syllables for comic effect, he still remains unmatched. It’s hard to think of anyone else who can make the line “If you a bitch, you a bitch, own it” so enticing and wacky.

Besides serving up summertime hyphy, The Gift Of Gab also has E-40 expanding his sonic palette and collaborating with a new generation of artists. “Ain’t Talkin Bout Nothing,” featuring Vince Staples and G Perico, is an album highlight. Over an off-kilter beat, Staples once again proves he’s one of the most interesting rappers out there by delivering a distorted verse and an equally dynamic chorus. G Perico also shines with a set of energetic bars. However, not all features aren’t as successful. E-40 takes a stab at dancehall and teams up with Ty Dolla $ign and Jamaican singer Konshens for “One Night.” Despite definitely being a tracklist curveball, the song never finds its groove.

The project closes with “When Life Shows Up,” a socially conscious song that features Mike Marshall and the political activist Dr. Cornel West. Following a clip of West giving a lecture about the power of black culture, E-40 raps about numerous topics ranging from him mourning at a funeral to the healthy evolution of his diet. Accompanied by a soulful chorus, E-40’s lyrics might be all over the place but the overall mood is definitely much more somber.

Regardless of the occasional misfire, The Gift Of Gab is a bold way to kick off a trilogy. At 50 years old and on his 25th album, E-40 has once again proven that he’s not scared to keep things fresh and weird. Yee!