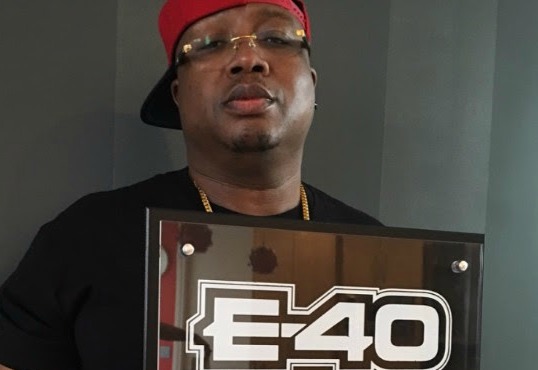 Heavy On The Grind Entertainment

E-40 isn’t just one of the most active OG’s in the game. He’s actually one of the hottest rappers out.

Just ask new school leaders such as Big Sean, Freddie Gibbs, Ty Dolla $ign and Yo Gotti, who have all recruited the 48-year-old rap legend for their own smash hits within the past year or so. The same attention to detail he’s adding to their records isn’t lost on his craft, either. Where living in the days where artist’s label meetings hover around streaming numbers opposed to record sales but 40 Watta managed to find 500,000 believers in his infectious 2014 single, “Choices (Yup).”

Around this time last year, the song was repackaged as a Golden State Warriors remix, as his Bay Area squad was in the midst of winning their first ever NBA championship, which in turn, hipped a lot of new and familiar fans to the fact that E-40 was still going all out in the studio.

“Man I was looking at the numbers and I’m like ‘I think I’m close to gold!’ 40 tells HipHopDX via phone call on the latest RIAA certification.

“So my distributor sent a note to the RIAA and they did their accounting and everything and analyzed it and that shit was certified, bruh! Matter fact, “Tell Me When to Go” just went gold two months ago. And “U and Dat Booty” went platinum the same day that “Tell Me When to Go” went gold. That’s sick huh? I probably got most shit out there that’s platinum and gold besides the stuff I already got, In a Major Way, [My] Ghetto Report Card and Element of Surprise and Hall of Game besides all the features. It’s a blessing and I’m not bragging, trust me I’m humble and hungry. I’m just elated because to be 48-years-old, I don’t think there’s anybody in this rap game whose ever done that at over 40-years-old with a gold single or a gold album or whatever. Of course we got Jigga [Jay Z] who’s two years younger than me of course he’s doing his thing, but I’m independent and I did this thing on my own. I really did it.”

40 considers himself an “older” rapper opposed to an old rapper, one who isn’t in denial about his age. It’s such a mentality that has kept him head above water in such a fickle and competitive industry.

“I just feel like age ain’t nothing but mind over matter,” he explains. “If you don’t mind it don’t matter. And I feel like there ain’t no expiration date on when a rapper is supposed to stop rapping. As long as I’m ganged up and I’m spitting harder than what these cats spitting its just over their head like a shower nozzle. I graduated from ‘Gamed Up University’ man you know what I’m talking about? Hustlers R’ Us man.”

“Name another 48-year-old rapper with one Gold record, let alone three in the same year. My fans stretch much further than the Bay Area, further than just the West Coast. I brought so much shit to Hip Hop. I’ve been relevant in each generation and each decade and I’ve done it as an independent artist.”

Released in 2006 as the lead single for his ninth studio album, My Ghetto Report Card, “Tell Me When to Go” solidified the moment when crunk got down on one knee and proposed to hyphy, resulting in a shotgun wedding that had the entire world celebrating. Ten years later, 40 Watta is collecting checks off the song once again thanks to a Beats commercial starring his Golden State Warriors’ enforcer Draymond Green. E-40 credits Oakland Apple employee Angela Barber with recognizing the significance the song can bring in rousing fans up during the intense NBA Playoffs.

Her being from the Bay Area, she knew how to put it together,” 40 continued. “I got a call from them and my lawyers told me they wanted to use it for the commercial and I had to sign off on it and it was all good I was like ‘lets go!'”

With the Warriors facing nearly impossible odds, being down 3-1 against the Oklahoma City Thunder in the Western Conference Finals, the commercial may lose its sting come later this evening but of course, Earl Stevens is more than optimistic of the defending champs’ chances of making a comeback.

“This big body might have to get out there and suit up,” he said with a hearty laugh. “They’re in a slump right now but they’re about to come up out that thing though. Being where they was at, it was loud, it was intimidating, and the OKC fans is really about their team. But we’re about ours, so now they have to come to ‘Roaracle.’ So they got to come up in that thing and were going to teach them a thing or two.”