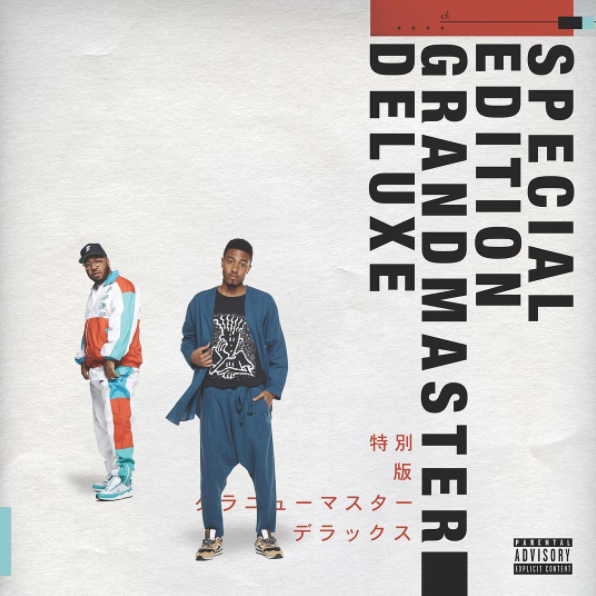 The Cool Kids have always thought outside the box. When The Bake Sale EP dropped in 2008, it was undeniably fresh and sonically miles away from artists like Lil Wayne, T-Pain, Flo Rida and others who were ruling the Billboard Hot 100 at the time.

Chuck Inglish and Sir Michael Rocks took samples from N.W.A’s hardcore street anthem, “Fuck The Police,” and weaved it into “Gold & A Pager,” which was essentially the millennial way of paying homage to the pioneers who laid the foundation. Then came the complications with Chocolate Industries, the Midwest duo’s one-time label, that brought The Cool Kids’ progression to a screeching halt.

Fast-forward to July 2016 and something Rocks once deemed impossible actually happened. The Cool Kids officially reunited and ensured fans a new album was on its way.

On September 15, after dropping a handful of loosies like “Connect Four” and “Running Man,” the duo made good on its promise and delivered Special Edition Grandmaster Deluxe, a 16-track roller coaster ride produced entirely by Inglish.

As Inglish described to HipHopDX, releasing the album “felt like taking a really deep breath, then exhaling. It’s a release for real.”

Album opener “The Moonlanding,” featuring an intro from comedian Hannibal Buress, sets the tone with its ominous synth sounds and deep 808 bass. With lines like, “We called it shark week ‘cause you niggas is some biters,” The Cool Kids are back with a vengeance and waste no time attempting to obliterate any perceived competition.

Taking a few notes from N.E.R.D., “Break Your Legs” channels the 2001 hit “Rock Star” with its hook, “We can shoot this fade right here for free” and smoothly flows into “20/20 Vision.” The track bumps will more rolling bass paired with Rocks’ and Inglish’s braggadocious bars.

One of the project’s highlights, “Westside Connections” featuring Buddy, Jay Worthy and Warm Brew, is reminiscent of classic Zapp & Roger and early West Coast G-Funk. The song manages to give each voice enough space to ride the funked-out beat without getting messy.

“The Motion” provides a few minutes of respite before the intensity picks up with “T.D.A.,” which finds A-Trak, Reese Laflare and Larry June echoing that Miami bass style that kicked off in the ‘80s.

“Too Smooth” brings the album to a close and serves as the exclamation point to an explosive return. While some of the lyrical content lacks intellectual maturity, there’s no denying Inglish’s beats bang from start to finish. He’s unabashedly unafraid to flex his sonic creativity, although that fact alone feels like one of the album’s only weaknesses.

It’s so eclectic that it lacks cohesiveness and struggles to find a consistent flow, but one of the things that makes The Cool Kids so intriguing in the first place is that Inglish and Rocks exude an air of apathy. They do what they want and retain their coolness at whatever cost.

Yep, The Cool Kids are back.