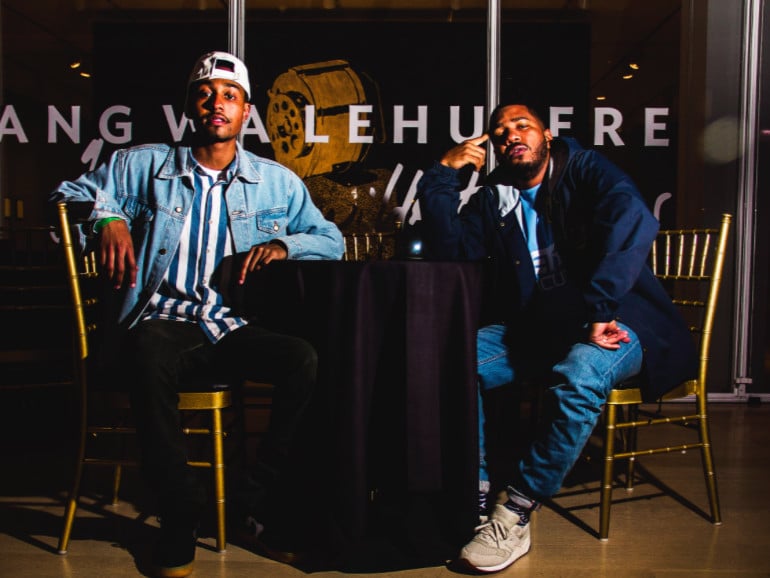 When the news broke that Sir Michael Rocks and Chuck Inglish were reuniting under The Cool Kids moniker after a lengthy hiatus, dedicated fans of the Chicago-based duo heaved a collective sigh of relief. After all, Mikey once said The Cool Kids were “never” coming back, but it appears they had a change of heart and have finally started making new music together.

Since The Cool Kids’ debut EP, 2008’s The Bake Sale, the two masterminds behind the project have suffered through record label woes and a consequential breakup, but now appear as solid as ever. So what changed?

“We wanted to give ourselves some room to go and kind of grow as artists instead of just as a group,” Mikey explains in an exclusive interview with HipHopDX. “Since the beginning, when you’re attached at the hip for a couple years, you kind of fall into a groove of working as a duo for everything and there’s time when you really need to go off and venture off on your own to work on yourself a little bit more and to gain new abilities you didn’t really have before.

“Eventually we wanted to make it a thing where it’s not just like, ‘Oh Cool Kids are making a new album,'” he continues. “We’re always together whether it’s on something that’s media based, clothes, film, whatever. We’re bouncing things off each other and making decision as a group still even when we’re not rapping together. We kind of wanted to build that mystique, so you couldn’t just lock us in to just that. That’s not just what we’re about to be doing forever.”

He adds, “We’re building a lot of other avenues that will make perfect sense as soon as we can unveil them. We wanted to make it so we can branch into different mediums to be able to be respected in those not just because we’re rapping. We wanted to be substantial figures in those realms. Sometimes you gotta flip to make that happen. The timing was better to come back as a group now then two years ago or three years ago. That was not a good time.”

In a 2010 interview, Mikey said they were “on the front door ready to blow up,” but then the relationship they had with their former record label, Chocolate Industries, crumbled and their debut full-length LP, When Fish Ride Bicycles (which was supposed to come out in 2008) didn’t actually surface until 2011. Mikey, who is now 28, and Inglish, who is four years his senior, have had some time to sift through what went down, and have come to the mature conclusion that everything happened for a reason.

“That was definitely part of the universe’s plan for whatever reason,” explains Mikey. “It definitely sucked and we were like, ‘Fuck this shit,’ but at the end of the day, it taught us a lot quickly at a young age. I think we’re able to navigate through things a lot better than a lot of people now. Now it’s been like that era for the past few years, it’s kind of been really easy. Everybody’s invited and everybody can blow up.

“But you’re starting to see a lot of character flaws and flaws in the foundation of people who receive too much too fast. You don’t get a chance to build your character for this shit, because you need character for this. You can’t just be talented and connected. You have to have character or you’ll die. Look at people. Muthafuckas are going crazy. This is the most breakdowns I’ve seen in this generation.”

Mikey is referencing Kanye West’s recent hospitalization and public rants, and it’s clear both Mikey and Inglish believe the hiatus was necessary in order to strengthen their characters individually, so once they did come back together, they were able to handle the immense pressure that comes with being in such a demanding industry.

“That’s a very accurate statement,” Inglish adds. “We want our moves to count. I think maybe subconsciously the universe led us to understand that a little bit more than maybe we understood. We’re not supposed to blow any moves. To the fans we have, to those who like what we represent and what we’ve delivered, our albums mean something. Solo work means something to you. We build up the demand to show you who we are apart so you can understand who we are together, so when we are together, it makes sense why those people get that feeling back.”

While the duo puts the finishing touches on their first album in five years, Special Edition Grand Master Deluxe, it’s clear Mikey and Chuck Inglish have a solid grasp on Hip Hop’s current climate. When asked about Lil Yachty‘s omnipresence online, they weren’t so quick to dismiss him but did explain how they felt he was unfairly catapulted into the rap spotlight.

“That’s a part of Hip Hop that’s necessary, with everybody jockin’ you,” Mikey says. “I’m going to call a spade a spade. Wasn’t nobody on Lil Yachty until Kanye put a red braid muthafucka in a fashion show, and people were like, ‘Oh who’s that? Oh he’s got rap records? Ok that’s what we on right now.’ Ain’t nobody played Lil Yachty before February unless you lived in Atlanta or was in the know. I knew him, but I knew people that know him.

“I was like, ‘Oh shit, he’s on right.’ He has hot songs, but they not hot because people think he’s hot. They hot because Kanye put him in his fashion show. They’re followers. No press broke Lil Yachty. No DJ broke Lil Yachty. Muthafuckin’ TIDAL Kanye season 2—whatever—broke Lil Yachty, so everyone is like, ‘Let’s listen to him now.’ That’s not really fair to him because he didn’t get that kind of discovery we got, where people are going to rock with you for life because they found you on their own.

He continues, “Kanye has an ear, but he didn’t put him on. It was the blogosphere. The spiderweb from Kanye is our culture in a nutshell. Whether it’s Kid Cudi or Big Sean or Desiigner—to whoever came through him. It’s impossible to avoid his influence, but when it comes down to the outlets to be so naive that they don’t have an opinion of their own.”

Inglish laughs, “Much love to Kanye, but I’m not trusting that n-gga on nothing. I don’t care what he say. I don’t give a fuck.”