Review: 2 Chainz Spoils Fans With The Snacktastic “Hibachi For Lunch” 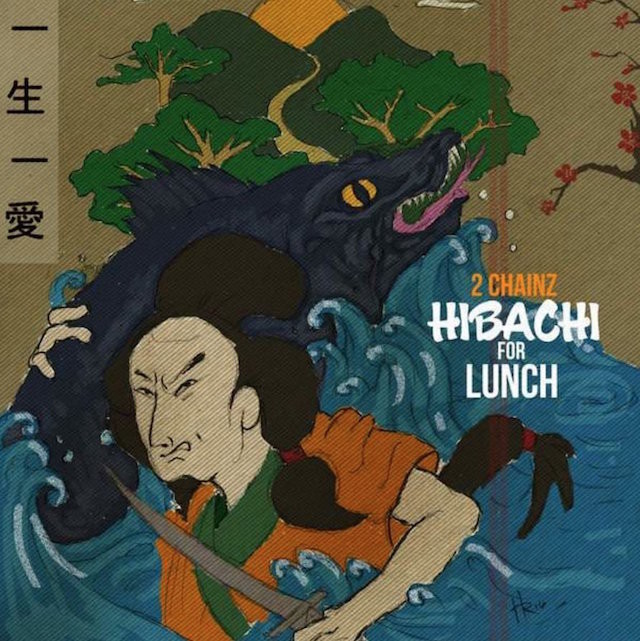 2 Chainz, born Tauheed Epps, never fell off, but he also hasn’t had a run like his 2016 blitz in a minute. His fourth (and likely final) project this year, Hibachi for Lunch, is the latest strategic blow to any of the other self-proclaimed Kings of Atlanta. While last year may have belonged to Future, Tity Two Necklaces has silently finessed the game from under him, like a thief in the night. The six-track EP, Felt like Cappin, opened up the year with a mission to cure hangovers and bolster egos simultaneously. The unexpected release spawned hit singles such as “MF’N Right” and “Not Invited,” which were ultimately repurposed for his immediate follow up with career-long ally, Lil Wayne. The Atlanta wildcard didn’t stop with his now archived collaborative album, ColleGrove, either. He dapped God on Chance the Rapper’s Coloring Book (and performed on Ellen,) wore pajamas to Ruth Chris on the G.O.O.D. Music single “Champions” and dropped two more EPs. With this kind of work ethic, if he’s not president by 2020, the game is rigged.

On any given track, Tity Boi consistently proves to have the biggest, most infectious persona – his charisma is borderline suffocating as his diamonds squawk and his money chirps at you. “Diamonds Talkin’ Back” is the most comical retelling of anthropomorphic jewelry since Young Thug’s “Picacho” (“Boom! Ping! Ping!). Only the cream of the crop, the most charismatic and experienced in Cappin’, should be allowed in the arena to spar with him. On that end, where Drake may have come short on the last EP, Daniel Son; Necklace Don, Quavo, Future and Gucci all rise to the occasion this time around. The latter of which, on a remarkable streak of his own since becoming a free man, shines as he recklessly praises and shades Kevin Durant while making lines with ten syllables sound like they have twice as many. Ty Dolla $ign proves to be this tape’s unnecessary addition, but even he plays his role. His staple hook making ability hopefully gives 2 Chainz radio success worthy of his boasts of bumpin’ Sade while getting some action on the highway.

While he may not be experiencing the same commercial success as circa-Based on a T.R.U. Story, rap’s Most Expensivest flexer has morphed into one of the strongest wordsmiths in the game. If being “dusty” equates to favoring technical, wordplay and punchline driven rapping, 2 Chainz is the dustiest rapper alive. Just listen to how he opens up the lackadaisical highlight, “Day Party,” with this blissful run on sentence: “BBQ, no key cools, no cheap shoes, good seafood, good beach food, should teach schools, shit been cool, cathedral, unequal, illegal…I go to Gucci to mingle.” “Doors Open” may be from the cutting room floor of 2 Chainz and Future collabs, but maintains relevance through nimble rhymes and hard-hitting punchlines (“used to sell work to his Unk, he ain’t push weight, nigga did pull-ups”). Poignant turns of phrase come easy to Mr. Epps, and he usually milks them for all their worth.

Whereas Mike WiLL Made It provides one of his most intriguing beats of the year for the closer, aptly titled “Here We Go Again,” a majority of the cuts on these last two EPs see 2 Chainz working with relatively new talent like Buddah Bless — proving that the secret sauce is solely in his own hands. As Atlanta’s sound gets co-opted by Philly or New York (or Toronto or London), 2 Chainz has re-emerged as the hero we never deserved. Hopefully, these last two efforts, both equally digestible due to their short runtimes, deliver the singles necessary for the rapper to raise the stakes and begin rolling out B.O.A.T.S. III