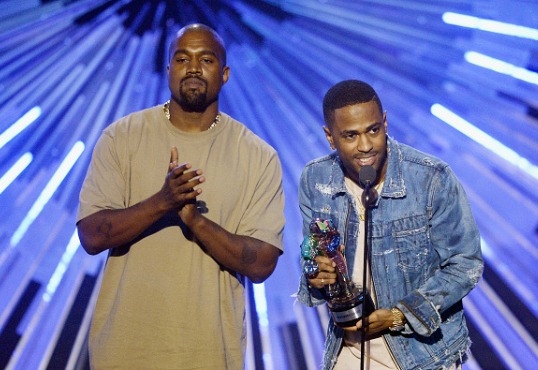 Do Rappers Still Compete For The Best Verse? Exhibit A: Kanye West's "Champions"

Early Friday (June 3) morning on Big Boy’s The Real 92.3 radio show, Kanye West let loose a mega collaboration in the form of “Champions (Round and Round).” The single is set to appear on the long awaited GOOD Music compilation follow-up to Cruel Summer through Cruel Winter. The track is an all-star affair with guest appearances from Travi$ Scott, Quavo, Big Sean, Yo Gotti, Gucci Mane, 2 Chainz and Desiigner.

But is it GOOD?

Yo Gotti recently told us that he recorded his verse after being alerted by Kanye on the fly and hours later, it was on the radio. Allow HipHopDX Managing Editor Trent Clark and Contributing Writer Jesse Fairfax to give their opinions.

Do Rappers Still Compete For The Best Verse?

This song sucks. Solely for the precedence “Mercy” set for not just a GOOD Music compilation but for new decade rap in general. (The fact that three out the four contributors on the record are on “Champions” just makes matters that much more depressing.)

Big Sean: I fully understand many people’s love/hate relationship with Sean Don. I tend to believe he flirts on the clever side of things opposed to the corny. He is the undisputed energetic leader of this band of self-proclaimed champs and his “hand san” line piqued my interest a bit, but when you’re rapping over the trap version of “Flashdance,” it’s really hard to hit a decent stride. He made a valiant effort, though.

Kanye West: I mean, this whole thing was his bright idea so there is no undermining his vision on how the song should be designed. I could undermine his overall bars and cadence (does he say “I done lost and made money” or “I done lost Aunt Mae money?”) but there is no doubt in my mind that the line “I just went Gucci in the Gucci store” will be one of those faved catchphrases in the club. His verse is definitely more entertaining than it is enlightening.

2 Chainz: The Hair Weave Killer exudes confidence whenever he spits, even when his bars aren’t up to snuff. That “new bitch/snowball effect” line was hardly Jay Z’s “chain reaction” quip from “Money Ain’t a Thang” and most of his other bars were equally as forgettable. But props to Tity Boi for never being too good to be wedged in between a star-studded record for no good reason other than making a presence.

Travis Scott, Quavo & Desiigner (Tie): Every song needs that accented ex-factor to make it pop but it doesn’t need three artists to pull it off. Out of everybody on the song’s extensive tracklist, Travis Scott might be the closest to his prime, seeing that 85% of rap artists out have “adopted” his sound is some shape or form. And while I’m personally pro-Panda, Desiigner has to know he can’t eat that off that bamboo forever. He definitely should have a had a 16 this time around.

Yo Gotti: So yeah, the CMG came clean and admitted he was thrown for a loop when he had to record his verse on the fly so he obviously didn’t have time to absorb any of the track’s DNA. Although it’s not like his fellow comrades dropped knowledge jewels and left him stranded with nonsensical rhymes about Ghosts and Phantoms, but he won’t be missed should a radio edit ever nix his shit from existence.

Gucci Mane: C’mon, mane. We applaud Yeezy for grabbing the Gucci to capitalize off his “fresh out” buzz but this was terrible. Had this been a struggle rapper on LiveMixtapes, no one would bother with a Q-tip to get a clearer listen of this flow, so we should definitely hold La Flare up to a higher standard. I’m not tripping though because like I said earlier, this song sucks.

Kanye West’s gift and curse is his ability to keep his finger on the pulse of our culture. Having always remained relevant by aligning with whoever is hot at the time, his only loyalty lies with trends from The College Dropout featuring Black Star to The Life of Pablo capitalizing on Future’s wave.

It makes little sense for Kanye to title another song “Champions,” especially one that can’t live up to the Queen sampled Roc-A-Fella posse cut or track two on Graduation. Nonetheless, he’s assembled frequent tagalongs and random bubbling rappers for the Avengers styled lead single from Cruel Winter.

Forced to pick who had the best, worst and most mediocre appearance, for me it boiled down to a few determining factors: whose over the top swagger was the most entertaining (the song is most tolerable if you think of these guys as wrestlers strutting around and showing off moves in the ring) and who had the best flow; because let’s face it, none of these gentleman could hold a candle to Nicki Minaj’s closing verse on “Monster.”

With respect owed to Travis Scott, Quavo and Desiigner (who’s forced upon us once again like Amber alerts on our phones) their contributions were side orders and not the main course. My rankings for “Champions” are…

Big Sean: For the most part I respect Big Sean, and here he sounds the most focused like he still has something to prove (maybe he learned his lesson after the world forgot “Control” was his song?) He doesn’t say much worth remembering, but technically he killed it (though rapping circles around the majority of G.O.O.D Music’s current roster isn’t a difficult task these days).

2 Chainz: With the first day of the summer approaching quickly, 2 Chainz has a strong contender for catchiest rap line that will ring off in clubs during 2016’s hottest months: “My new bitch gon’ pull me a new bitch/ Then pull me a new bitch/  See that is a snowball effect.” Sure to resonate with 23-year-olds wishing for endless dating options and 29-year-olds wishing they were 23 again, this is essentially what happens when you’re 38 catering to youth.

Gucci Mane: I’m hoping Cruel Winter is toiled over more than The Life of Pablo was, but that would be hard to believe with a Big Guwop feature just a week since his release from prison. Kanye is always looking to link up with any buzzing prospect, if this song been released in 2014 it’s safe to say Bobby Shmurda would have been on it. Gucci Mane is neither great, horrible or memorable here, I’d even go as far as to say he’s out of place.

Kanye West: Given it’s his song and he plays such a huge role as a leader of his camp, Yeezy should aspire to never get completely outshined. Lately it seems yes men won’t tell him he isn’t coming with it or he’s just utterly lacking inspiration. If “Champions” signals the return of the weekly Good Fridays series, I’d like Kanye to channel more “Chain Heavy” and less of his infatuation with the high end bleached anus lifestyle.

Yo Gotti: It could be because I’ve had a long day, but I practically fell asleep my first time hearing Yo Gotti’s verse. Subsequent listens didn’t prove to be any more interesting, but I respect that he’s sort of arrived after a long tenure as an underground niche veteran. In place of Gotti’s appearance, a Desiigner verse would have at least stirred up discussion as to whether or not “Panda” renders him a complete flash in the pan.