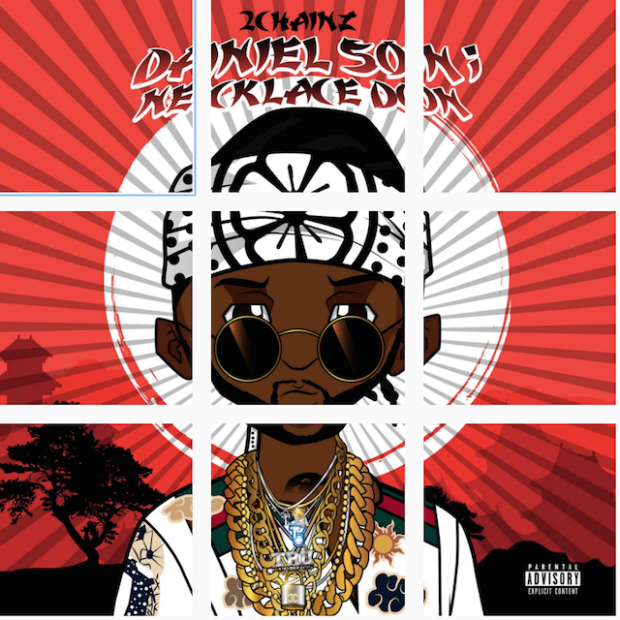 For 2 Chainz, the past few years have been spent trying to keep up with the buzz and success that 2011 garnered him with his T.R.U. REALigion mixtape and his 2012 debut album Based on a T.R.U. Story. His sophomore album B.O.A.T.S. II: Me Time peaked at #3 on the charts but fell way short of the impact his previous efforts made. After a series of swings and misses including ColleGrove, his joint album with Lil Wayne, 2 Chainz is back with his latest offering Daniel Son; Necklace Don.

As you can imagine by the name of the project, the direction and theme borrow influences from The Karate Kid. The tape opens with an offensive Asian accent complete live action karate sounds to bring the accompanying, stereotypical artwork full circle. Mr. Hair Weave Killer continues the oriental trend with “Get Out the Bed” as he combines hard hitting bass over a nostalgic, melodic soundbed akin to the 1987 Sega Genesis hit game, Shinobi. 2 Chainz The sounds of robust 808’s and the fawning over his codeine addiction highlight that he is certainly in his element.

Daniel Son quickly grows redundant and forgettable three tracks in. “Chirp” offers the bounce that Titi Boi fans have grown accustomed to but the sheer corniness of the chorus erase what otherwise could have been a somewhat enjoyable song. Reminiscent to Kanye West’s infamously terrible laser onomatopoeia on “Haters” from The Blueprint 3, Tity Two Necklaces recreates the sound a Nextel chirp makes throughout the chorus. In a twist of irony, the hook boasts about setting an alarm for people biting his style but the first verse starts off doing just that, taking from Desiigner with “I got Bloods in Savannah, I got Crips on Old National/on ya hoe like a fashion, pinky ring on Alaska.”

Hopelessness for anything resembling entertainment value diminishes when you reach the Drake-assisted, Buddah Bless produced “Big Amount.” With thin drums built over an 80’s karate movie soundtrack akin to a montage from the Mr. Miyagi movies, 2 Chainz continues to phone it in. Even the Toronto Don faxed it in with, “Michael Jackson talking to me in my dreams and he say ‘you bad and you know it.’”

The charm, silliness, and infectious chants backed by powerful percussion that drew us to 2 Chainz aren’t consistent enough to equate to a dope product this time around. Beyond the seemingly corny-on-purpose bars, the only redeeming quality in the music is its ability to be so ignorant, you can’t help but laugh. The main positive takeaway from Daniel Son; Necklace Don is that 2 Chainz might be the first rapper to successfully use a semicolon in an album title.