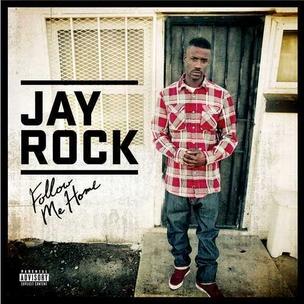 The emergence of young emcees from California has been highlighted for the last couple of years with Blu, Fashawn, Kendrick Lamar and Odd Future leading the way. It’s hard not to notice the new batch of prospects giving the area life where Dr. Dre, Snoop Dogg and others once did the same. Part of this reemergence and resurgence has been showcased with the new release of Jay Rock’s Follow Me Home album, a project that has Watts, California’s fingerprints all over it.

No one questions Jay Rock’s hood credentials, and his rhymes serve to narrate the current events of his hometown with clarity and sincerity. Complemented by his deep, gritty voice, reminiscent of Shyne and Game, Jay Rock shows he’s well versed in the dealings of street life. “Code Red,” “’Bout That,” “No Joke” and “All I Know Is” showcase this. While some may enjoy the street-driven theme, Jay Rock truly shines when he goes into the hood tales with depth. “Just Like Me” is a standout because of its introspective nature. “The moral of the story, certain hearts will never feel it. Plus, their mind is really twisted. It’s a sickness when I kill my own kind,” he says over mellow, melodic horns. Lyrically, “M.O.N.E.Y.” also shows Rock is capable of extraordinary and clever work, though fans may end up wanting more of this type of lyricism present on the album in place of some of the less stellar cuts (“Boomerang,”

Jay Rock’s ear for beats mirrors his lyricism in that it’s Cali-centric. “Code Red” and “Elbows” are reminiscent of Compton’s Doctor, with piano keys bringing 2001 back. “Finest Hour ”

brings Miami to L.A. for a Rick Ross feature. “All My Life”

shows Rock could travel to Hollywood, with assistance from Lil Wayne and Will.i.am of The Black Eyed Peas, who lends a chart topping hook to Rock’s street-bred rhymes. Jay Rock can also remain true to grit with the instrumental behind “Hood Gone Love It,”

where Kendrick Lamar lends a hand on an anthemic banger that any hood could appreciate.

The hood tales have been told over and over in Hip Hop. The beauty of it is not in the rehashing of the subject matter, but in the originality and creativity with which it’s done. In the case of Jay Rock, he carried the influence from past West Coast legends, while adding his own touch of flair on occasion. A capable lyricist with an ear for beats, there is sure to be more to come from him and his camp with more time in the game. For now, Follow Me Home is a lowrider journey to California, with many ups and some downs included. Still, “you ain’t gotta like it ‘cause the hood gone love it.”