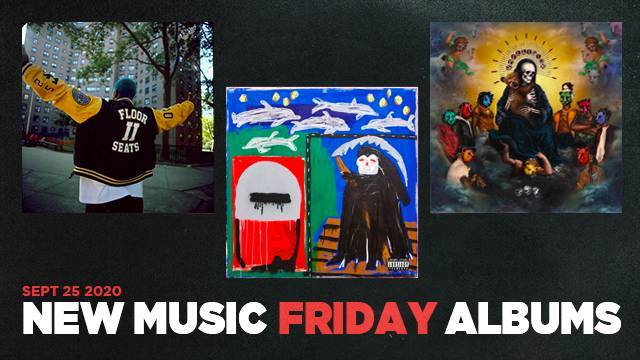 The final New Music Friday of September is jam-packed with a variety of albums for Hip Hop fans. This week’s lineup features the latest works of A$AP Ferg and Action Bronson as well as the major debut of the EarthGang and J.I.D-led group Spillage Village.

Also, Elzhi gives listeners another dose of his elite lyricism with his first solo LP since 2016. Plus, Public Enemy returns to Def Jam Recordings to release their first album on the iconic label since 1998.

Questions about A$AP Ferg’s status in the A$AP Mob may remain, but it’s business as usual when it comes to his career. The RCA Records artist has released a new project titled Floor Seats II, which boasts collaborations with Nicki Minaj, Lil Wayne, Mulatto, Tyga and Marilyn Manson, among others.

The Spillage Village collective gets to showcase their talents as a unit on Spilligion, their first LP for Dreamville and Interscope Records. Familiar faces such as EarthGang, J.I.D and 6LACK are joined by fellow crew members Hollywood JB, Jurdan Bryant, Mereba and Benji on the 12-track album.

Action Bronson – Only For Dolphins

Elzhi unleashes a cavalcade of jaw-dropping wordplay on his Seven Times Down Eights Times Up LP, which arrives two years after his Jericho Jackson collab with Khrysis. The entire project is produced by JR Swiftz, who’s become one of the Griselda Records roster’s go-to producers in recent years.

Public Enemy – What You Gonna Do When The Grid Goes Down?

Two decades after leaving Def Jam, Public Enemy has come back to the label to drop their What You Gonna Do When The Grid Goes Down? album. The legendary group’s 17-track LP features Nas, Black Thought, Rapsody, DJ Premier, YG, Ice-T, the living members of the Beastie Boys, Run-DMC, George Clinton and more.

Fredo Bang – In The Name Of Gee

Fredo Bang originally intended for his In The Name Of Gee project to compete with YoungBoy Never Broke Again’s Top album, but they ultimately didn’t go head-to-head on September 11. That’s probably for the best since YoungBoy’s LP debuted at No. 1 on the Billboard 200, setting a high bar for Fredo even with Def Jam’s support.

Former Maybach Music Group artist Stalley comes through with Speak No Blue, his second EP of 2020. The eight-track project serves as the follow-up to April’s Pariah.

Nappy Roots are still going strong as they inch closer to the 20th anniversary of their platinum-selling debut Watermelon, Chicken & Gritz. The group’s latest album 40RTY is executive produced by 808Blake and marks their first release since 2017’s Another 40 Akerz.

Machine Gun Kelly has moved away from Hip Hop for Tickets To My Downfall, a pop-punk LP produced by Travis Barker. Despite MGK’s genre switch, he still gets some help from the likes of Trippie Redd and iann dior.