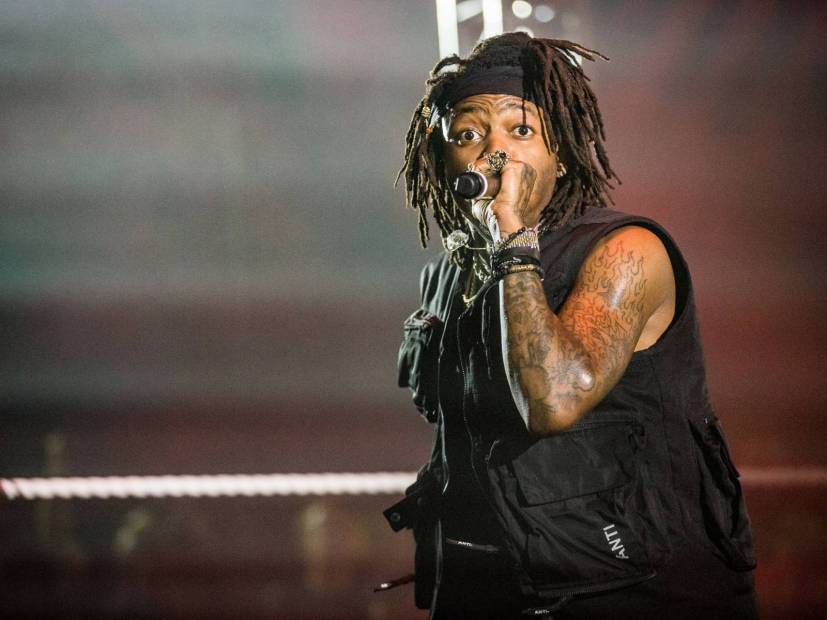 Miami, FL – Outkast was given the award for Best New Rap Group at the 1995 Source Awards. In a now famous Hip Hop moment, André 3000 and Big Boi took the stage to a sea of boos. It’s difficult to imagine a time in Hip Hop where Outkast, one of the greatest Hip Hop duos of all time, would be booed by a crowd of their peers — but it happened.

Amid the discontent of the crowd, 3 Stacks proudly proclaimed, “The South got something to say.” Over two decades later, East Atlanta’s own J.I.D is carrying the torch and reminding us the South still has something to say.

J.I.D, born Destin Choice Route, is well on his way toward being lauded as a legendary lyricist. Since his debut album The Never Story in 2017, he’s become lauded for his mastery of the pen. He’s a shapeshifter in nature and seamlessly switches between fast, Twista-esque bars and slow Southern rap ballads. 2018’s Dicaprio 2 solidified his reputation as one of the most exciting rappers in the game with features from A$AP Ferg, Method Man, Joey Bada$$ and Dreamville captain, J. Cole.

In late February, J.I.D participated in Denzel Curry’s Red Bull Zeltron World Wide in Miami — months before the coronavirus pandemic started — which paired the Atlanta native head-to-head with Curry for a five-round rap battle. It was an explosive showcase of bars that took place inside a custom-built wrestling ring.

If the battle proved one thing, it’s that J.I.D knows how to compete. It’s a sensibility that came in part from J.I.D’s experiences playing football in his youth. Competition driven by a powerful work ethic, paired with J.I.D’s endearing authenticity are key factors in his well-earned success.

HipHopDX caught up with J.I.D before his battle with Curry in Miami to chat about what authenticity means to him, growing up in East Atlanta and how making an album can be therapeutic.

HipHopDX: How are you doing today? How’s your voice feeling?

HipHopDX: Can you tell me a bit about this show and how you and Denzel linked up?

J.I.D: Denzel’s the homie. We already got a friendship outside of music. So, he just called me, telling me about him possibly doing these. I’m like, ‘Alright, cool that’s tight.’ He started doing them and I was on tour the whole time. End of the year, he really wrapped it up, set up everything and got it going. Picked the first date, but it didn’t work out — I had to rest. [But then] it happened easily.

HipHopDX: What’s cool about this event in particular?

HipHopDX: What’s your mindset going into this?

J.I.D: Just do whatever I gotta do to make sure the crowd is entertained and have fun. It’s like a family event.

HipHopDX: How did playing sports influence your mindset towards your music?

J.I.D: It showed me a work ethic over talent type mindset — keep working and that’ll pay off if you’re being smart about it and you know what your strengths and weaknesses are.

HipHopDX: Can you tell me a bit about East Atlanta?

J.I.D: It’s where I grew up. Just off the top it’s going to have a special place. Just the people. It’s not the easiest, but I feel like I grew up around some good, solid people. I stayed around them which kept me on a good path. It was just the people that I chose more so than what was around me. It’s a lot of opportunities for you to get into whatever, but you could find a way around it. By the grace of God I did.

This nigga Denzel one of the most genuine people I ever met, last night was crazy and if u were there u know it was some next level shit, Thanks to @redbull all the people who popped out showed love, shared energy and everything, do not miss this shit wen it comes to ya city!! (I should prolly drop Bruuuh Remix huh?)

HipHopDX: How did you keep your head straight and focus during that time?

J.I.D: It’s really no definite answer. I just know I focused on what I needed to do which was sports at the time. I wasn’t really doing music until later on in my life. I just stayed on that, I stayed on people that was doing that. We got into stuff, but it was nothing crazy enough to detriment what’s going on right now.

HipHopDX: Are you still living out there?

HipHopDX: What does authenticity mean to you?

J.I.D: That’s just being comfortable in your own skin — for everybody. Just being happy with who you are and accepting the person you see in the mirror.

J.I.D: It’s lit! You heard Lil Baby’s album [My Turn]? It’s amazing. We outside. Nudy just dropped. Atlanta’s got it from every angle I see.

HipHopDX: You and a bunch of East Atlanta rappers came up together and seem to share a bond. Why is that important to you? Talking about your relationship with EarthGang …

J.I.D: They from the Westside. They not from the Eastside. They’d be very upset if there was someone in the room from EarthGang …

Going to meet the Queen 🐝

J.I.D: You gotta put that in the interview — threatened by EarthGang. Westside is very aggressive and assertive [laughs]. But nah, they’re my brothers. We went to college together and shit like that. We met outside of Atlanta but we like, ‘Oh you’re from Atlanta.’ So, we run and shit. It wasn’t really nothing. Just staying with people that you’re comfortable with, that you’ll learn something. You don’t feel like the smartest person in the room all the time.

HipHopDX: Dicaprio 2 has been out for a little bit and you’ve had some time to think about it. Looking back at it, what are your thoughts and where are you heading in the future?

J.I.D: More music and stuff. That’s all, bro. That was just another piece of the whole picture. I’m just trying to get these stories off — that’s really all. It’s more like, therapeutic. Sometimes it’s for the people but at the same time, sometimes it’s like therapy — you just gotta hear this, I don’t care how you feel, you just gotta get it off.

HipHopDX: Is it the writing process that’s therapeutic to you?

J.I.D: All of that. Even the whole process of putting an album out — it’s intense. If you’ve never been through it, making an album, putting it out. That’s a crazy strenuous process. It’s almost like science. It’s really hard to explain.

HipHopDX: What would your advice to future rappers and upcoming rappers?

J.I.D: Just stay authentic. Be comfortable in your skin. Get your stories off, if you got a story to tell. If you’re a vibe artist, vibe out — make sure the party’s lit. If you’re a sad, somber artist, you get those emotions out. Whatever it is, just be true to yourself.

HipHopDX: What can we expect next?

J.I.D: Good music, getting the stories off.