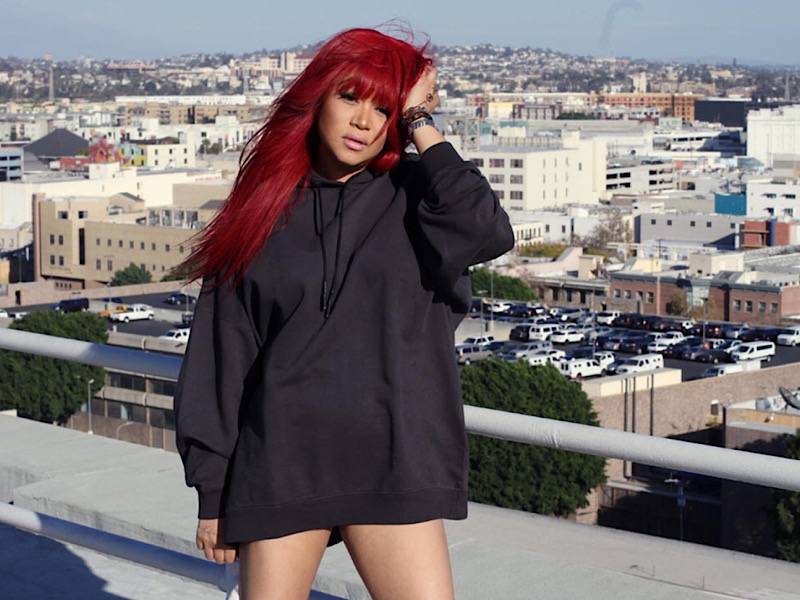 In some ways, being a songwriter is one of the more selfless ways that an individual can carve a niche in the music industry. There is a particular type of energy required to help others reach dreams by telling — in essence — your story. For some, though, their aspirations make it impossible to sit on the sidelines forever. Rapper Saint Jhn is an excellent example of this: the aha moment when an artist embraces their true calling.

This is (in many ways) the case with singer/songwriter Tiffany Red. Though she’s embracing her role as a new artist, she’s spent the past decade gainfully employed in the music industry writing for a who’s who of A-list performers. Her first placement on Jennifer Hudson’s self-titled debut album earned her a Grammy award. She’s since solidified herself as a go-to writer, even transcending her writing skills into television — notably for both Star and Empire.

However, it’s her music that’s become her focus as of late, with her latest EP Call Me Red, Vol 1 poised to be her breakout. Having been a faceless figure behind the pen until her initial foray, 2018s Drake, transitioning from writer to artist means starting at square one. For Tiffany, though, taking chances is how she got into the business.

“I’ve been writing — like writing poetry and stuff like that — since I was about 12,” she tells HipHopDX. “I was always creative in high school … I always did well in English, and writing has always been the way that I express myself.”

It was in high school, when a friend of hers convinced her to turn her poetry into a song, that her path became clear.

“That was the day I discovered I knew how to write melody … I didn’t really like grow up singing or anything like that,” she says. “I went from being this unmotivated kid to having a purpose. Since I was little, I was like ‘fuck this shit.’ I knew that when I got into the world, all this shit they were telling me in school was not going to fucking matter.”

She ran with it, and her big break came at the age of 20 when taking a chance led to a domino effect that changed the course of her career. It stemmed from the most unlikely of sources: singer Omarion’s 2006 sophomore album, 21.

“‘Midnight’ was my favorite song on there. I looked up who wrote it, and it was The Underdogs,” she explains. ”I Googled them, found all their information, and just cold email shot my shot. The publisher of the company had just got hired; he responded to me and was like, ‘Yo, why don’t you come to L.A.? You can come fuck with us for a week.’”

Though initially reluctant, her mother let her go, under the agreement that if it didn’t work out, she would go to school. She never looked back, landing her first significant placement within her first year. “I fell into it … it’s stars aligning type shit.”

As she admits, nothing came easy — and her true success came with dedication.

“There came the point where the Grammy didn’t matter anymore. I was broke; I would’ve sold that shit if they would’ve let me sell it back then,” she says with a laugh. She’s since written for the likes of Jason Derulo, Tamar Braxton, Fantasia and more. This, of course, on top of writing for network television.

“I’ve been writing for Empire for the last two years, so like of course, there’s the stuff that’s not out yet, you know,” she says. “But, I will say this though, I think I have both songs on the premiere episode when it comes back — also another episode later in the season.”

If you would’ve told 12 year old Tiffany that one day @4everbrandy would sing a song she wrote I’m positive she would’ve been like yea right!! I’m talking bout this is a real rnb songwriter bucket list moment for me!! I can’t even begin to tell you guys how overwhelming it is looking at this video‼️ Again..thank you @kosine5internz @theoriginalbigdaddy @foxatfox and everyone at @staronfox for making this moment real‼️ Mom Brandy is singing my song 😩😩 Lets go team!!! @itsbreanamarin @kosine5internz @itskeyzbaby @ayotheproducer

With all her success, that has now spanned well over a decade, she explains that her confidence was ultimately the barrier that kept her from forging her path as an artist.

“At the beginning of my career as a writer, I had a lot of people who told me I couldn’t sing, which was discouraging,” she says, pointing to the caliber of singers who she was around consistently. “I was always really insecure about my voice, but when I really started singing and found my voice, I realized that tone is the most important part of somebody’s vocal identity,” she states.

Super excited about my latest ✨Artist Collection✨ with @sounds make sure you guys head over to sounds.com and check it out‼️

As she got more comfortable in her skin, she began to understand the power of her vocal tone — often noticing that singers would leave elements of her reference tracks in the final mix.

“I got to a point as a writer where I wanted to tell my story, and my songwriting style was changing because I was starting to produce,” she explains. “I also engineer, so I record all my stuff. My style started to become so mine that I was just like, dang, this sounds like something… I don’t want to give it to somebody else.

“I was so sick of giving my shit to somebody else. Like, I was sick of listening to somebody else telling my story and not tell it as well as I know I did,” she adds. “I had written for all these people, and my voice is what was selling the records. It was what was making the people pick them and stuff. So, I started just doing me.”

Though two EP’s preceded it, Call Me Red, Vol. 1 feels very much like a real intro to Tiffany’s full potential. It’s a project that came together over roughly three years. It’s also a project that almost didn’t see the light of day.

She recounts, “I had an accident over the summer [of 2019] … in August, I was on set for a photo shoot, and I fell through a roof. It was crazy. I fractured my ribs and almost died. I landed on some asphalt. Like, it was insane.”

She continues, recalling her initial thoughts upon realizing she’d survived.

“After I realized I wasn’t dead, it was, ‘Oh my God, I didn’t put my projects out … that was one of my first thoughts,” she admits. “I feel like that’s why the music feels so genuine; I’m singing from a place of like, I almost didn’t get to do this.”

During this period, she couldn’t walk or sing without pain. “I was really in a different place. I was in physical therapy and just rehabbing every part of my life while I was finishing this project. Everything that could go wrong went wrong all at the same time.”

It’s the perseverance she exhibited offline that makes the feedback on the project all the more special for her.

Still, her position remains insanely unique, and the longer one chats with Tiffany, the more she reveals the depths of her career highlights. She came into her own in a cohort that included names like Frank Ocean (with whom she shared a manager). She has traveled to Korea and written wildly successful K-Pop records (something she casually mentions they want her to do again). But, at this point in her career, she‘s going with the flow.

According to Tiffany, Call Me Red, Vol. 2 is already underway — as well as the grip of upcoming projects she’s not willing to disclose just yet. However, she does hint at getting involved in television (in front of the camera this time).

Stream Tiffany Red’s Call Me Red Vol. 1 below, and be sure to follow her Instagram for updates.