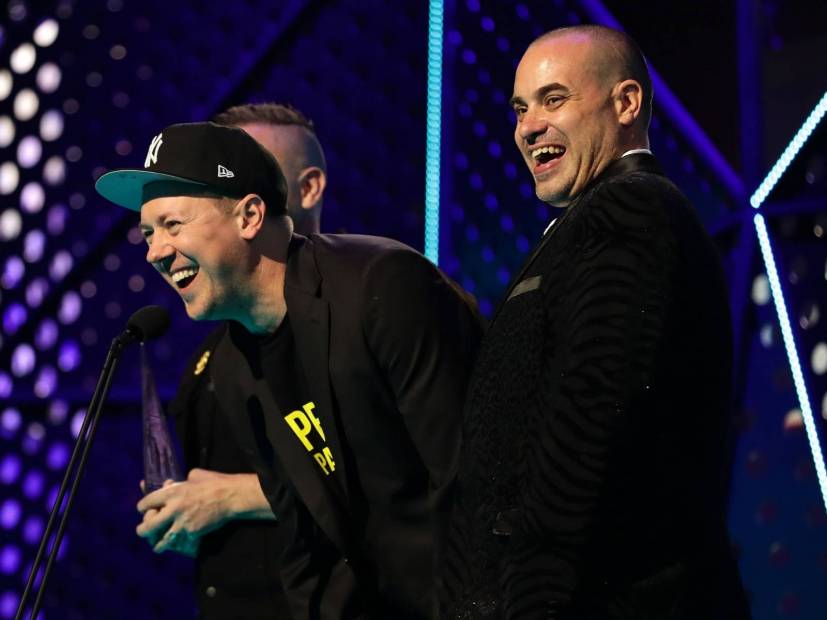 If Suffa wasn’t a member of Hilltop Hoods, the Aussie MC could easily be a stand-up comedian, or at the very least, a comedic actor.

His quick wit and gregarious personality shine through the phone as he talked to HipHopDX about Hilltop Hoods’ storied career, one that stretches back to 1994 when the group first formed in Blackwood, Adelaide, South Australia.

Six of the group’s eight studio albums have hit No. 1 on the Australian Recording Industry Association (ARIA) chart, including their most recent, The Great Expanse. But over the past 25 years, their content has evolved as Suffa, Pressure and DJ Debris have incurred more “grown up” responsibilities.

While Suffa, who is married with two young daughters, still cops to being an “immature knucklehead” at times, he’s not afraid to broach topics that reflect where he is today — whether that be his role as a father, what it’s like juggling his career with family life or any inner turmoil he faces.

During the recent DX interview, Suffa talks about staying true to Hilltop Hoods’ roots, his feelings on their big hit “Cosby Sweater” in the wake of Bill Cosby’s imprisonment and why his three-year-old daughter may or may not be his biggest fan.

HipHopDX: Six of your eight albums have gone No. 1 on the Australian chart. Do you feel that it’s harder to breakthrough like that in the United States coming from a different country?

MC Suffa: Yeah, I was saying funny enough I think one of the barriers is our accent because we’re not like a Iggy Azalea, someone that puts on an American accent. [Laughs] My manager is making a face and claws at me like I’m being catty. I’m not being catty. I’m fine for her. She lived in Atlanta, like I get it. We sound like we sound. Sometimes people can find it a little different.

HipHopDX: I think different is good, but yeah. You actually addressed it in an interview with somebody. You were asked about the current Hip Hop landscape and trap music. I liked that you guys said you basically stay true to who you are. Are there ever moments where you feel industry pressure to conform to a more mainstream sound?

MC Suffa: You know what it is Kyle, I’m too old to care.

HipHopDX: I hear that.

MC Suffa: You sort of can’t corrupt someone who has nothing to lose. You know what I mean? If we were to do it, we’d do it badly because it’s not the kind of music that we listen to, so it would be disingenuous and not good.

HipHopDX: I hear you. I struggle with it sometimes. I am closer to your age and grew up with Run-DMC, De La Soul, Beastie Boys and Eric B. & Rakim.

MC Suffa: I’m the same but at the same time, there’s still Kendrick Lamar and J. Cole and there’s a heap of stuff out there for me as well. There’s still a ton of stuff for me, there’s more stuff to wade through.

HipHopDX: Do you think that touring in the United States is different than touring in Australia then?

HipHopDX: I like the German one. That’s hilarious. I want to experience that at least once.

HipHopDX: I could see that. Actually, I wouldn’t want to be blindfolded at a German show. Fuck that [laughs].

MC Suffa: Yeah, not for me. I wouldn’t either.

HipHopDX: I was listening to The Great Expanse and I feel like there’s a lot of grown man raps, or “dad rap,” as Slug of Atmosphere calls it. He coined that phrase. Did your writing shift when you got engaged or when you had a kid?

MC Suffa: It was probably more for me when I had kids. Don’t get me wrong. We’re still kind of immature knuckleheads, but I couldn’t keep doing the same thing I’ve been doing all this time and reconcile it. Once again, it would come across as disingenuous. I kind of embrace it as well. You know what I mean? Dad rap, man.

HipHopDX: I think it’s great. I don’t want to stay stuck in the same place I was in my 20s. That happens to people. I’m still a dork, but I make sure that I’m trying to become a better person along the way.

MC Suffa: You got to evolve.

HipHopDX: Tell me a little bit about how fatherhood changed you in terms of being an artist and a human being.

MC Suffa: Time becomes more finite. I’m sort of a stay-at-home dad as well as a full-time musician. It’s a balance. Yeah, I don’t know. I wouldn’t be the same person [on albums] that I was when I was a 20-year-old knucklehead kid because in the back of my mind, there’s something there that’s like, ‘They’re going to hear this one day.’ Not that they haven’t heard it, but they’re going to hear this and understand it one day.

HipHopDX: Has your three-year-old figured out you’re a musician?

MC Suffa: The three-year-old sort of does. She comes to concerts and stuff like that, but it’s like watching really. There’s usually a bunch of kids at our shows, so she’d prefer to be backstage playing with kids. Then Mom drags her out to watch and she’s usually asleep within a song or two.

MC Suffa: Maybe not my biggest fan, yes [laughs]. She understands in the way that any kid understands. To her, it’s just my job. It’s no different than anyone else. Later on, she was sort of getting that it was kind of a different job, but at this stage, she’s just like, ‘That’s his job.’ I’m not a regular dad. I’m a cool dad.

A recap from Saturday’s night show at RAC Arena. Next stop, Lucindale for Triple J’s #OneNightStand!

HipHopDX: Yeah, my dad is a cool dad. He’s been in a band since I was born. We’d go to his rehearsals and stuff and then we’d go with him to the studio. We have all these funny recordings of us as little kids.

HipHopDX: He still plays, yeah. His group is called The Firm, which started in the early 80s. Around the mid-80s, Jimmy Page from Led Zeppelin named his band The Firm. My dad’s band, being a group of lawyers, took Jimmy Page to court and sued him. They basically sold the rights to Jimmy Page so he could name his band The Firm. I just remember we got a new car soon after.

HipHopDX: I’ve always been so curious like what happens behind the scenes.

MC Suffa: That’s crazy. Jimmy Page had to pay. He basically kidnapped that 14-year-old girl. I’m glad your dad got him. There are people in this car and hearing that sentence on its own, they’re all just giving me a look.

HipHopDX: You’re going to love this question then. Did your feelings about your Bill Cosby Sweater song change after Bill Cosby got convicted?

MC Suffa: Here’s the thing. The song isn’t about Bill Cosby. It was about a sweater. Actually, it wasn’t even about a sweater. It was like, rhyming, and that was in the cards. I’m not going to lie, when that suit came out, I was like, “Oh this sucks.” I wish I had done like “goofy sweater” or “comfy sweater” or anything else because he’s a monster and just having any sort of known association sucks. We’ve never been great at naming songs. Well, I haven’t anyway.

MC Suffa: Honestly, yeah that’s a good name. But as soon as that came out, we were like, “Oh no. Oh no. Has Chevy Chase done anything?”

HipHopDX: [Laughs] You’re like, “Let me look into his criminal record first.” Have you considered changing the name of the song? Do you say Cosby? I can’t remember.

MC Suffa: They say Cosby sweater, but live it’s sort of mushed into the live show. It doesn’t even matter if they change a word. I don’t think people would notice. It wouldn’t be doing a service.

Hilltop Hoods are currently on tour. Check out the dates below.