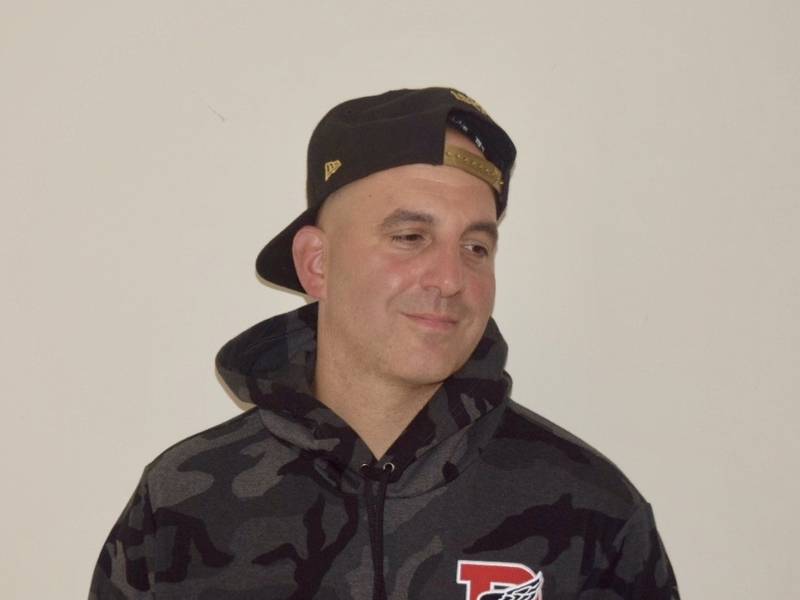 Fans enjoying the sound of Ghostface Killah and Inspectah Deck’s new albums largely have one man to thank. Brooklyn-based producer Danny Caiazzo may not well known at this point, but he’s making a major impact when it comes to the Wu-Tang Clan’s recent solo work.

After linking up with Wu-Tang affiliate Remedy, Caiazzo has established a collaborative relationship with Ghostface and Deck that’s been quite fruitful. He not only produced 10 tracks on the Rebel INS’ Chamber No. 9 LP but also did the entirety of Ghost Deini’s Ghostface Killahs album.

Following the release of the respective projects, HipHopDX caught up with Caiazzo to find out how he became the main producer behind Ghostface and Deck’s latest solo efforts. The New York-bred beatmaker also details how he went from working in the World Trade Center to following his passion for Hip Hop by making beats.

HipHopDX: Danny, let’s talk about your history. Tell me a little bit about yourself and how you started getting into production.

Caiazzo: I grew up listening to Hip Hop. A big fan of the music and the culture and everything that went along with it … graffiti, breakdancing, the music. I guess right around high school era was when I started listening to groups like Public Enemy, Cypress Hill and A Tribe Called Quest. I just fell in love with everything about it. I just continued to be a Hip Hop head and listen for different groups and different artists. Wu-Tang made a big impact on me growing up.

And then as far as myself getting into production, I was working in the World Trade Center on 9/11 as a stockbroker, a bond broker. After that, I sat with some people and talked about the events that went on. A few people told me, one specifically told me to follow a passion, do something that I love and the first thing that came to my mind was Hip Hop. I guess this was like November of 2001.

Since then, I’ve just been teaching myself how to produce, how to make music. It was on keyboards at first and then I started getting into the whole MPCs and the drum machines and things like that. From there, I started an independent label — myself with some artists that I met over the years. Slowly but surely, I just kept stacking up beats. Through a friend of mine out on Staten Island, I got hooked up with Remedy. From there, the rest of the Wu-Tang: Inspectah Deck, Ghostface, etc.

HipHopDX: What year would you say things starting to click for you as a producer? When did you finally start getting the hang of it?

Caiazzo: I started getting the hang of it, to be honest with you, like ’06, ’07. Something around there, just teaching myself the ins and outs, like the drum breaks and finding samples and sampling different types of music, learning how to dig for loops and breaks and things like that, and just studying other producers. I guess around there. That was around the time that I was doing an independent label thing that I had myself with artists that were under the label. So, like around 2006, 2007.

HipHopDX: What was it like starting a label at that time? What kind of difficulties or challenges did you face?

Caiazzo: Well, just being responsible for every decision that was made and dealing with different egos and personalities. Also, the difficult part — this was before the social media thing. It was hard getting the music out to be heard. I guess the biggest thing is distribution and promotion and to get the proper distribution and the proper promotion. It all comes with money and a cost. So, that was kind of difficult, just getting the music to be heard. I would say was the most difficult thing.

HipHopDX: Gotcha. You mentioned Remedy and I’m just wondering, how did you link up with him and end up connecting with the actual Wu-Tang members like Deck and Ghostface?

Caiazzo: A good friend of mine who lives on Staten Island, he reached out to me one day and said I could get beats to Remedy, who always works with Inspectah Deck. He said, “You want to send me something?” I said, “Yeah,” I put a folder together for him. I sent it to him and I guess Remedy listened to them. He got back to me within the first couple of days that I sent him and he said, “Come down to the studio. I’m working with Inspectah Deck.” I went down. I played Deck a folder of my beats. He picked a bunch. That was kind of how that relationship started with Deck. Remedy and I would put beats aside that we thought would be good for Inspectah Deck as time went on, whether he was on the road or doing some of his other projects or whatever.

The same kind of thing happened with Ghost. Over time, we put a folder together for beats that I had before and beats that I was making during the time that I started working out of that studio down in Staten Island that we thought would be in Ghostface’s lane. We put a folder together for him. He sat down with Remedy the first time and listened to the folder that I had made and he liked a bunch of them.

That’s when I first went down and linked up with Ghost. From then on, I was making more music to finish the whole project because he liked so many from the initial folder, he decided he wanted to do a whole project. Remedy and I had went through folders and folders of beats to try to find things that we thought would be good for him and in his lane.

HipHopDX: You ended up doing in a majority of the production on Deck’s Chamber No. 9 too. When did you realize that you would be doing so much of the album? Or was it a surprise to you finding out just how much of your work he used?

Caiazzo: The Deck album was a surprise, as far as how much of the production that I did. There were definitely ones that I knew were going to go. He was toying with the album, what songs we’re going to make it, not going to make it. I always knew there was going to be like seven or eight. I didn’t know there was going to be 10, but it wound up being 10. Obviously, when you get 10 songs with Inspectah Deck, it’s a blessing. So, I was just honored for the opportunity.

HipHopDX: You were speaking about how the album with Ghostface developed. Can you tell me just what inspired you sound-wise and what you think connected with him so well?

Caiazzo: I think the choices and the samples, honestly. I think it was you that mentioned the Aaron Neville sample on Twitter, right?

Caiazzo: When I heard that break for the first time, I was like — and that was a while ago. That was in one of the original folders. I just knew he would kill that and he did. Then, I think the thing that connected most is the samples, like “Conditioning.” When I heard the flute sample, I knew that that would be right in his lane. Even though he’d never really done like a reggae song like “Soursop,” I knew it would be in his lane too. I knew he would be able to flip that into something and make it dope. So, it was really the samples.

Obviously, you know — you’re a Hip Hop head. His discography, he has a great ear for beats and a great ear for samples. I really think the thing that connected was the choice of samples. There was a variety of different genres of music. It wasn’t just soul music, even though that’s what he’s known most for. There was a couple of those, but, like I said, the flutes on “Conditioning” or even the guitars on “Burner To Burner,” I think it’s the samples that resonated with him the most.

HipHopDX: You mentioned how he got a hold of a beat pack and was liking so many of them. How much of the album came from that original pack and how many more did you end up crafting for him?

HipHopDX: Like you were saying earlier, Ghostface really meshed well with the reggae sound on “Soursop.” What was your approach as far as knowing what works for Wu-Tang sonically versus coming in with fresh ideas and new takes that you thought would mesh well?

With that being said, I did know that this was just going to be a Ghostface solo project. I went in knowing that. So, I try and cater and mold the sound to what I thought would he would appreciate. The feedback that we’ve been getting from fans is that we accomplished the mission.

HipHopDX: Absolutely. You had mentioned the “Hercules” sample. I definitely love that one as a Louisiana native. But what type of samples intrigued you and inspire you as a producer?

Caiazzo: The “Hercules” one, obviously, is more mainstream. The Neville Brothers are pretty popular. I’ve always been a fan of their music. As a producer, I’ve just become a fan of different genres of music because of it. It’s exposed me to so many different types of music that I wouldn’t have think that I would ever be a fan of.

I’m just using it as an example: the “Conditioning” sample is from a Japanese animation song. So, it just opened my mind to so many different types of different genres of music. I really get inspired by soundtracks, Italian crime soundtracks. Like I was just saying, Japanese music. I really like Brazilian music, psychedelic rock. I’m a big fan of other producers who have dipped into those genres of music, whether it’s like a Madlib or MF DOOM. People like that who sample obscure type things.

HipHopDX: That’s dope. I think you’re now on the radar of a lot of people with these Deck and Ghostface albums. Who else are you working with these days? Who else can people expect to hear rhyming over your beats?

Caiazzo: There’s two albums that I know that are coming out. There’s a Wu-Tang Vs. Remedy album coming out that a lot of my beats are on. A bunch of members from Wu-Tang. Ghostface is on it. Deck is on it. Method Man’s on it. Masta Killa. Cappadonna’s on it. That’s coming out.

I’m working with Spit Gemz. He’s from New York. I don’t know if you’re familiar. I sent him a folder. He has some of my stuff. An artist of my own that I’m producing, his name is Too Chill Will. He’s from Brooklyn. I’m just down to work with whoever wants to work, whoever likes the sound.

HipHopDX: That’s good to hear. For MCs that are interested in working with you, what’s the best way to reach you?

Caiazzo: These days, social media makes it very easy. Instagram is @dcaiazzo. My Twitter is @d_caiazzo. Those are the two best ways at this point.

Shout out everybody who has been listening and supporting these projects, Remedy, Wigs, Ghost and Deck.