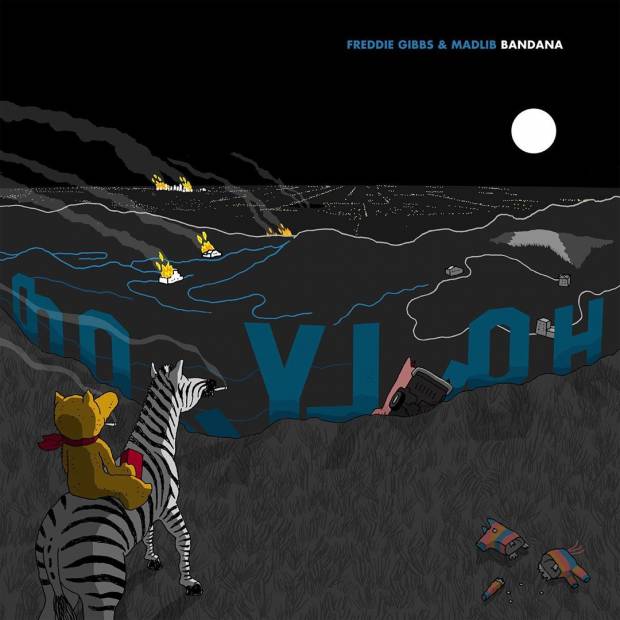 Five years ago, esteemed gangsta rapper Freddie Gibbs made the simple transition to just esteemed rapper with the release of Piñata, his collaboration album alongside the reclusive production maestro Madlib.

Although the Gary, Indiana native had been a card-carrying member of virtually every rapper advantageous mileage program imaginable (major label signee, visible soldier in a superstars’ entourage, former XXL freshman), it wasn’t until said project where his abrasive reality parables received the type of critical acclaim reserved for artists with established careers.

Their reunion, the seamless Bandana, finds Freddie the most poised and matured he’s ever been on the mic. He laments on self-afflicted past transgressions while still emerging as the antihero via the ruminative “Practice” (“Wifey put me out the crib and tell me to come back home tomorrow/When I got caught the fuck up, she hit me with the ultimatum/You need to come home with your daughter”) and the sense of urgency felt on album anchor “Soul Right” reveals the weathered effects on street life and how second opportunities must be seized at all costs.

Lest not fret about Freddie Kane going the route of a cotton picker, however. The impeccable Bandana packs plenty of the patented thuggery everyone has come to demand from Gangsta Gibbs. The smooth-as-glass “Palmolive” collaboration unfolds like a drug dealers anonymous group therapy session as Freddie, Pusha T and Killer Mike all pour out crystallized imagery of their capers for rap fiends to sniff. On “Flat Tummy Tea,” there’s an elevated sense of lyrical recklessness as Freddie tackles a myriad of debatable topics similar to the same Instagram timelines the laxative thrives with its advertisements.

But the underlying star of the show is undoubtedly Madlib, whose symbiotic relationship shines through in spite of Freddie’s relentless lyrical chopper. “Massage Seats” splices a bit of Boogie Down Bronx and a bit of Jamrock to make for the perfect MC lunchbox. The adrenaline-fueling “Giannis” is living proof trap melodies aren’t the only sound beds that can mutate a subwoofer as the haunting piano loop and ample James Brown sample morsels allow Freddie and Anderson .Paak to go nutty with their protests.

And living up to his lauded reputation, the cerebral producer gives a few of the tracks the “value pack” treatment, stuffing two beats into a short stay, making for a fluid and exciting listening experience (the lean 46-minute run time also contributes to the easy digestion).

In all actuality, Bandana is brimming with records heads can easily classify as not sounding like a perceived Madlib beat. Whether it’s the heavenly emotion puffed into “Gat Damn” or a polar opposite such as the somewhat whimsical jam heard on “Crime Pays,” Young Quasimoto manages to find airtight harmonies amid soul music; a feat that should be acknowledged with a muthafuckin’ bow or curtsy.

Listening practices and preferences within Hip Hop music bend and break with the times; it’s inevitable. As the culture is currently enamored with more rhythmic patterns than the meat on the bone, Freddie Gibbs and Madlib have undoubtedly proved they can compete without compromising their composition standards.

Respects are in order. Salute.