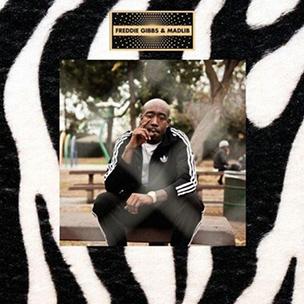 Freddie Gibbs is sticking to his guns. After years of not-so-quiet industry hurdles, Piñata feels a little like another debut. His content remains uncompromised—nothing on the album would be a fit for radio—and particularly with Madlib at the helm, he seems as focused as ever. It’s a bit of a new brand of the same for Gibbs in that sense, undoubtedly his best and most streamlined to date, another conspicuous drop in the bucket for ‘Lib. The album itself, like their first and two other EPs that help build up this full-length, has been released on the producer’s own label. Gibbs is an album removed from his CTE departure—ESGN as his independent debut less than a year ago—and Madlib splitting his time between Stones Throw Records and his self-named Invazion imprint.

By his own account, Gibbs’ strength is in his versatility, and he has an obvious knack for transcending either his hometown or current landscape. To that end, with Gary, Indiana in the pocket and Chicago somewhere in the mix, Piñata may well measure up as a high mark of Hip Hop by year’s end. Gibbs makes as good a use of Madlib production as could be said in recent years, and he’s no doubt benefited from top-tier attention. The record carries the producer’s most appealing fingerprints: a knack for minimalist funkiness and well-channelled quirks, as well as some of his more polished production of late. There’s no rough-draft Madlib to be found, and instead he’s satisfied his attention span with consistent beat interludes and sampled film quotes that push along song transitions.

Gibbs has likely never had as refined a platform for his flow, and he jumps from bouncy double time to his laid back near-drawl with each track. His ability to switch immediately from upbeat nostalgia for a Chicago chicken spot anthem in “Harold’s” to a sinister drug drama alongside Raekwon on “Bomb” is testament to his general agility. The features help center the rapper too, cut in the cloth of either Rae or Scarface on one hand and a decade older than Domo Genesis, Mac Miller, or Earl Sweatshirt on the other.

Dense and verse-heavy, most of the best lines are pleasantly un-emphasized, Freddie’s flow and baritone the obvious allure. On the standout and now years old “Thuggin’” he quips, “Why the Feds worried ‘bout me clocking on this corner / When there’s politicians out here getting popped in Arizona / Bitch, I’m thuggin’.” The gangster subject matter runs from “split your potato” slang to more grounded imagery on songs like “Broken,” a track that features Scarface and a verse from Gibbs grappling with his father’s history as a possibly crooked police officer. It’s stories like those that ground the rapper’s thuggish tales in more than imaginative boasts, particularly as self-doubt and insecurity ride along. Gibbs is believably cool and endearingly vulnerable, a mix of no-good and knows-better. “Seven grams of rock, I stuff ‘em in my nuts / And seven bucks an hour wasn’t good enough,” he raps.

For good or bad, Piñata is also home to another Jeezy dis. To the rapper’s credit, it’s a well done and defensible act of aggression that boasts not one but two Madlib beats—the first a fast-paced, cowbell heavy break and the second a more G-funk leaning backdrop. If “Real” has an obvious downside it’s that it will almost certainly age poorly in comparison to the rest of the release, a possibly tacky timestamp down the line (it should also probably be his last word on the subject). For all his grittiness, Gibbs has an unchecked humor and relaxed demeanor on songs like “Robes” and the L.A. anthem “Lakers.” As he continues to encourage weather as much as Tupac comparisons, he hones in with a relevant vocal sample from the rapper at the end of that track. “This is not a new allegiance to the West Coast,” ‘Pac says in an interview clip, “I’ve been on the West Coast all this time.” For Gibbs as well it sounds convincingly true, both as personal narrative—he has lived there for years now—as well as artistic justification. The album is, after all, Hoosier-bred West Coast Gangster, an uncontrived intersection of Gibbs’ Tupac, Scarface, and Master P fascination rolled in one.

Piñata’s most obvious accomplishment is as a polished contemporary Gangster Rap album, and it’s a feat in subject as much as sound with Gibbs at his self-reflective best. Madlib is as forward as he has been in years and offers his emcee production to flex his delivery in a way he’s never had a chance to do before, riding out to finicky loops instead of more rigidly overlaid drums as he’s done previously. The upshot is that Piñata is likely a MadGibbs peak, and it would be hard to blame them for stopping here. If the rapper is smart he’ll use it as a roadmap for directing future solo releases, a blueprint in design more than sound. He won’t have to team up with Madlib again to achieve the same level of focus, but he’ll have to ditch the mixtape inclinations and longer tracklists as he’s done here. As Gangster Rap, Piñata is free of conceptual pretense; it’s a slice more than a thesis. It’s also a new benchmark for Gibbs and may end up as a career calling card. If nothing else, it quickly sounds like one of the year’s best.