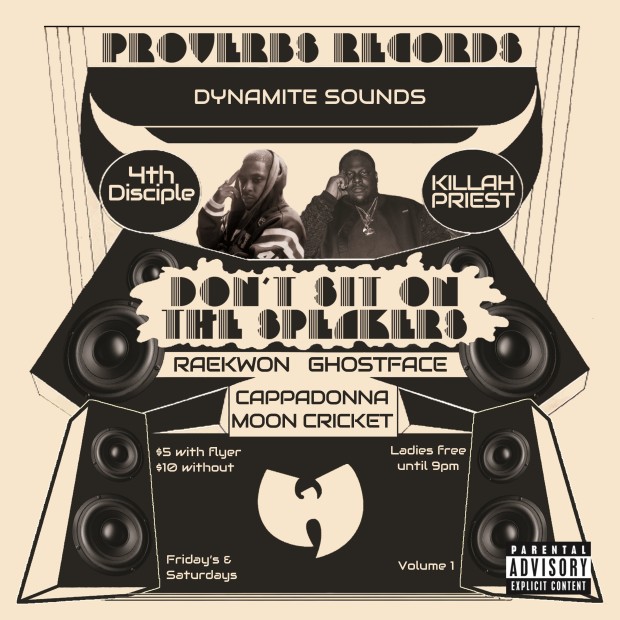 Wu-Tang Clan’s 2017 silver anniversary had worthy contributions to their catalog and legacy with releases including Raekwon’s The Wild, Masta Killa’s Loyalty Is Royalty, and the group’s comeback album Wu-Tang: The Saga Continues. Killah Priest is an unsung original Wu-Tang member and the most respected lyricist from their quadruplet offshoot Sunz Of Man. Given the formidable songwriting ability on his solo albums Heavy Mental, Views From Masada, and Planet of the Gods, it’s a natural progression for Priest to select Wu-Tang’s original DJ/studio engineer and Killarmy member 4th Disciple to deliver their first joint project Don’t Sit On The Speakers to return to the essence of what inspired them to become an MC and DJ, respectively.

Song like “KP Supreme (A & B Side)” with its sample of 1970s NYC disco staple “Love Is The Message” and its switch to the time-capsuled increased BPM of the piano medley on the Isaac Hayes classic “Ike’s Mood” show the scientific yet dark horse Killah Priest like a member of Crash Crew harmonizing the short chorus “five days of work” in a playful b-boy persona. “You Don’t Stop” featuring Raekwon impressively has both matching 4th Disciple’s lighting quick turntable wizardry without their cadences falling off.

The chunky bass groove and uptempo drums on “G-Boyz” is where Priest effortlessly drops spiritual and mathematical stanzas in a deadpan manner, “Light can escape black holes in the cosmos/Rap Picasso/Cold like Chicago/Calcium, every ounce of the sun/celestial rhymes, words bounce off the tongue/Kinetic energy, esoteric MC/Hybrid Hip Hop, you high off the weed.” “Moon Crickets” features stellar contributions from Ghostface Killah and Cappadonna and “Disco Airlines” is where Ghostface re-ups the ante for the project. Killah Priest’s channeling of KRS-One reviewing the black culture’s evolution and superiority over an electro-rap era beat serves as a transition from the post-disco to JVC boombox era in Hip Hop. But the album’s momentum is stunted by cacophony-sampled background scratches and Priest’s freestyle cadence that sounds out of sync drowning each other out. The breakneck congo speed of “Last Minutes of Summer,” and “Sativa” Wild Style theme song cuts are also seem too busy to follow with the lyrics on the tracks.

The interludes on Don’t Sit On The Speakers are filled soundbytes of parties that sound like phantom ghosts from Hip Hop’s first generation. Also, there is an overkill with fillers between the tracks containing distorted recordings of brief diatribes and shout-outs by Cormega and Kxng Crooked, and other would-be staged calls into a fictitious radio show on WHBI 105.9 FM, the pioneering station where legendary jocks Mr. Magic and Jazzy Jay on The Zulu Beat Show had brought rap music to the airwaves.

Wu-Tang Clan mastermind RZA stated in a 1995 interview that the group’s mission was to revert rap music to the onstage energy and lyrical mastery of Grandmaster Flash and the Furious Five and the Cold Crush Brothers. Wu’s romanticized mission to venture back to the future has kept dyed-in-the-wool traditionalists eager to ride on the wings of the killer bees on every project they shell out. Killah Priest and 4th Disciple execute this mission delivering pathos of park jam MCs and the smart usage of 1970s breakbeats, disco staples, and rollerskating bounce grooves without sounding too outdated. It won’t convert SoundCloud junkies but the project upholds the crew’s underground aesthetic that has kept them relevant for the past 25 years.