Review: With "The Wild," Raekwon Is Now Rap's Benjamin Button 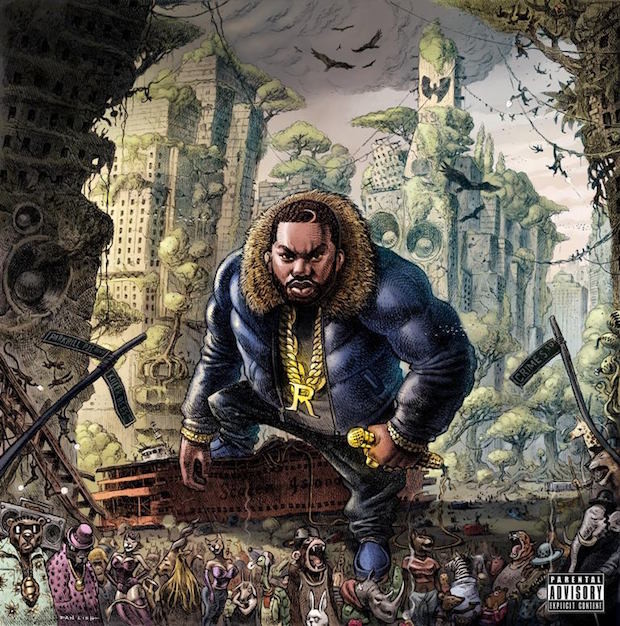 If you blinked at some point in the last eight years, you may have missed when Raekwon recaptured his mantle as one of the rap’s greats. His debut Only Built 4 Cuban Linx (a.k.a. The Purple Tape) is a classic, but even for many Wu-Tang Clan fans, that’s where his solo career ends. The RZA-absent Immobilarity suffered from sophomore slump status and The Lex Diamond Story failed to make a blip on the radar. But Only Built 4 Cuban Linx II slew the demons of expectations, and the follow-ups Wu-Massacre (with Method Man and Ghostface Killah) and the solo record Shaolin Vs. Wu-Tang shook off the cobwebs completely. His last record Fly International Luxurious Art seemed to steer The Chef off course, but The Wild shows him back on his square.

Raekwon’s stamp on rap comes from his one-of-a-kind writing style, and his pen is still sharp on The Wild, more than 20 years into his career. His novelist-like attention to detail and his linguistic mastery are still one of a kind. “I Have Nothing” paints a broody canvas of robberies, complete with particulars like a victim’s camo jacket, the scene of “taxing” rich athletes at a track meet, and Rae himself battling a strep throat while crashing a spot. “This Is What It Comes To” plays with the urgency of Ghostface’s “Shakey Dog,” starting with a scene of Rae and his squad surrounding foes with guns drawn, ready to pump them full of cyanide-soaked bullets. “Crown of Thrones” showcases more street imagery, with a cleverly-phrased lesson: “getting money’s easy, keeping it that’s the hard part/creeps and scavengers roam the land, call them aardvarks.” Raekwon’s words flow into each other so effortlessly, and his rhymes are so dense, that the songs demand repeated listens — not for punchlines or wit, but to catch each piece of information he has laid out. “Marvin” tells the story of the life and murder of soul legend Marvin Gaye, which plays like one of Rae’s street tales in its own right. The song occasionally feels like a Wikipedia entry with the way it lists events, and Rae is best with characters he creates from scratch instead of depicting people who already exist. But he still gives Gaye and his family the reverence they deserve and maintains a foreboding tone that shows off his narrative flair. The song also excels sonically, with a soulful beat that has a vocal sample and a CeeLo chorus harmonizing with each other.

One of the pleasant surprises of The Wild is the lack of guest appearances. Even “solo” Raekwon records are often collaborative affairs: OB4CL shared a billing with Ghostface as its co-star, and his other albums are flooded with cameos from other Wu members or his Rolodex of rap legends. (The guest list of his last album, Fly International Luxurious Art, hurt any hopes of cohesion it had.) But The Wild has only three featured rappers, all of them solid. Lil Wayne heads back to the block to pack bricks on “Corners,” Raekwon signee P.U.R.E. trades rhymes with him in Rae-and-Ghost fashion on “M N,” and G-Eazy uses his verse on “Purple Brick Road” to pay homage to Rae and appreciate the moment as a landmark in his career. His Wu-Tang brethren are nowhere to be found here, either (even though Ghost appears on a remix of “This Is What It Comes Too” that was released as a loosie).

It’ll be a letdown for fans who tune in to Raekwon’s music for the great cameo appearances he usually garners, but it’s a pleasure to see Raekwon truly hold his own 22 years after his debut changed rap forever. It makes his boasts on the longevity-celebrating “The Reign” land more firmly, and even makes the out-of-place cleanliness of “Visiting Hour (featuring Andra Day)” more tolerable. The lack of additional star power is only negatively felt with the production. The beats here do their jobs, but they don’t stand out enough to skim through credits. For someone like Rae, who listeners have heard over the likes of RZA, Dr. Dre, Pete Rock and J Dilla, this may be a disappointment. Still, none of these beats are poor enough to stop Rae’s momentum — and the general grimness captures much of the dark Wu-Tang Clan sound that diehard fans will want to hear.

The single-copy Wu-Tang Clan album is sitting in Pharma Bro’s cupboard, and RZA has said that if the Clan ever does another group album, that Ghostface will be the one who organizes everyone. But after gauging the consistency of Rae’s latest, maybe it should be him doing the shot calling. In recent years, some fans’ association with the group ranged from upset to indifference and aside from the Cuban Linx brothers, other group members are either focusing on other endeavors or having trouble getting attention for their music. With The Wild, Raekwon firmly grabs another trophy for the squad while continuing to pad his own hall of fame legacy in the process.