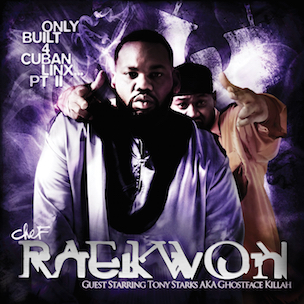 Probably the rarest phenomenon in all of Hip Hop, like film, is a sequel that’s as good as its predecessor. Often times, artists or directors simply try to cash in on the nostalgia of their original work. Other attempts are simply endeavors to recapture the glory of yesteryear. Whatever the purposes for making a sequel, such efforts typically fail – and it can be for a myriad of reasons. Sometimes it’s the lack of dedication of the parties involved; sometimes it’s simply the fact that a bonafide classic is just so damn hard to make. It might not seem that way, given that the word is used to describe every other album these days, but true classics are a rarity.

One such classic is Raekwon’s [click to read] Only Built 4 Cuban Linx. The 1995 crime epic is so revered that even its skits are discussed to this day. Universally regarded as one of Hip Hop’s finest offerings, the original OB4CL was a blend of cinematic storytelling, fierce lyricism and unforgettable production. In the 14 years since the purple tape hit shelves, Rae’s solo releases included two disappointments in 1999’s Immobilarity and 2003’s The Lex Diamond Story [click to read]. So it’s no surprise that when Raekwon revealed he would be making a sequel to his magnum opus, fans’ reactions were a mix of excitement and skepticism. While there was no doubt Rae had the potential to deliver another work of art, his batting average left much to be desired. So it must be with a sigh of relief that Raekwon delivers us Only Built 4 Cuban Linx 2, as he manages to meet almost impossible expectations and deliver the best Wu-Tang member solo album since 2000’s Supreme Clientele.

OB4CL2 picks up right where its precursor left off with “Return of the North Star” featuring Papa Wu. Although it functions as little more than a skit, it’s a seamless transition from the original album. Most importantly, it indicates that Raekwon understands that OB4CL2’s worth will be dictated by whether or not it can be played immediately after the original without missing a step. Perhaps for that reason, Rae blows the door off the hinges with the classic Wu-Tang sound on “House of Flying Daggers,” with Wu brethren Inspectah Deck [click to read], Ghostface Killah [click to read] and Method Man [click to view] getting in on the posse cut. The track, complete with chanting chorus, Kung-Fu samples and frenetic violin loop sounds like it came straight from an early ’90s RZA [click to read] recording session (as do the emcees who spit over it). As such, it’ll come as a surprise to fans that the song comes courtesy of the late J Dilla.

What cannot be stressed enough about Cuban Linx 2 is the astounding thoroughness in its execution. It’s clear that every contributor to the album – producers, executive producers, featured artists – was acutely aware of how a Cuban Linx album should sound. Take Pete Rock’s [click to read] work on “Sonny’s Missing” as an example. The beat is something out of a ‘40s black and white gangster flick, and provides the perfect backdrop for Rae to weave tales about the violent and seedy underworld. The Marley Marl-produced [click to read] sampler (it clocks in at under a minute) “Pyrex Vision” is another prime instance, as what appears to be an audibly high Raekwon doles out orders while he cooks up fishscale. Despite many fans’ doubts, Dr. Dre makes contributions as well. His signature keys and drums provide a Latin Mafioso flavor, and recall the excellence displayed in the previous pairing of Rae and Dre on Busta Rhymes’ [click to read] “Goldmine.” Not to be forgotten is The RZA, whose contributions include the haunting “New Wu” [click to listen].

With such a stellar production crew, it’d be a shame if the rhymes didn’t stack up. But once again, it’s apparent from every emcee’s performance that the Cuban Linx legacy is to be upheld. Raekwon, who has in recent years preferred a laid-back, menacing flow, sounds completely alive and reawakened here, and in top form. Similarly, GZA [click to read], who sleepwalked through the Clan’s 8 Diagrams [click to read], flexes his lyrical muscle alongside Slick Rick and Masta Killa on “We Will Rob You.” Method Man, who was largely a nonfactor on his own Blackout! 2 [click to read] delivers vicious verses on both “New Wu” and “House of Flying Daggers.” Beanie Sigel’s [click to read] prison tales fit perfectly on “Have Mercy” [click to listen], and Jadakiss [click to read] and Styles P [click to read] bring their signature gritty sound. But just as was the case on the first Cuban Linx, the most potent combination comes in the form of Raekwon and Ghostface Killah. Ghost’s signature storytelling is on full display on “Gihad,” where he details getting caught with his man’s (or is it his son’s?) girl:

“And she pregnant, my little man got her knocked up, he popped up/ (oh shit!) I’m like a crooked cop, Richard Gere, big smirk on, getting my cock sucked/ He pulled the joint out, a bullet spun out/ But it was too late, already nutted on the side of her mouth/ Side of her face and her hair, like Something About Mary/ I can’t front, my son gun look scary/ Chill, she’s a whore!/ You knew that from the time we rain trains on her and you still went and fucked her raw/ Come on, son, gimme the gun/ You gonna kill me over this bum ass bitch that you can’t resist?”

It would be remiss to relegate all the praise for OB4CL2 solely to the production and rhyming –excellent though it may be – without also noting the album’s incredible attention to detail. Different effects are used to make the album a complete and atmospheric listening experience. On “Gihad,” the choral loop in the back becomes muffled halfway through Raekwon’s verse, then resumes right as Ghostface comes in, giving it extra punch. On “Fat Lady” the beat is purposely interrupted in order to let a mini-skit play out to great storytelling effect. And just as they did in OB4CL, every skit plays an important role to setting the scene for either the song it follows or precedes. These details, while miniscule, contribute greatly to the overall listening experience of the album, and indicate that it is truly a labor of love.

All praise aside, OB4CL2 is not without its flaws, however limited. Comprised of 21 tracks, Raekwon could’ve trimmed a little fat, most of which occurs near the end of the album. Dr. Dre’s other offering, “About Me” featuring Busta Rhymes, is a somewhat generic and doesn’t contribute much. The same can be said of “Mean Streets,”  “Kiss The Ring” and “Surgical Gloves.” It’s not that these tracks are awful; in fact, they could likely be highlights on someone else’s album. It’s simply that they don’t match the standard set by the rest of the album.

Without a doubt, Only Built 4 Cuban Linx 2 is crime Rap done properly. Whereas modern examples of the sub-genre offer little or no examination of consequences, or are simply just too amateurish or dumbed down in their depictions, OB4CL2 (just like the original) is pure cinema – a near-flawless crime epic executed to near-perfection. Not only is it, as previously mentioned, far and away the best Wu-Tang album in years, but also probably the finest album the east coast has offered since Jay-Z’s The Black Album [click to read]. But Cuban Linx 2’s value should not be measured solely by virtue of what it means to the Wu-Tang Clan, New York, or even to Raekwon; it’s a modern-day music masterpiece that proves, even in 2009, some albums that are labeled “classic” earn it. As in film, not every sequel will capture the essence of the original. Much like The Godfather Part II, Only Built 4 Cuban Linx 2 succeeds whether other sequels fail: by creating something that not only maintains the original’s integrity, but carries a distinct vision of its own.