Review: Method Man Does The Heavy Lifting On "Wu-Tang: The Saga Continues" 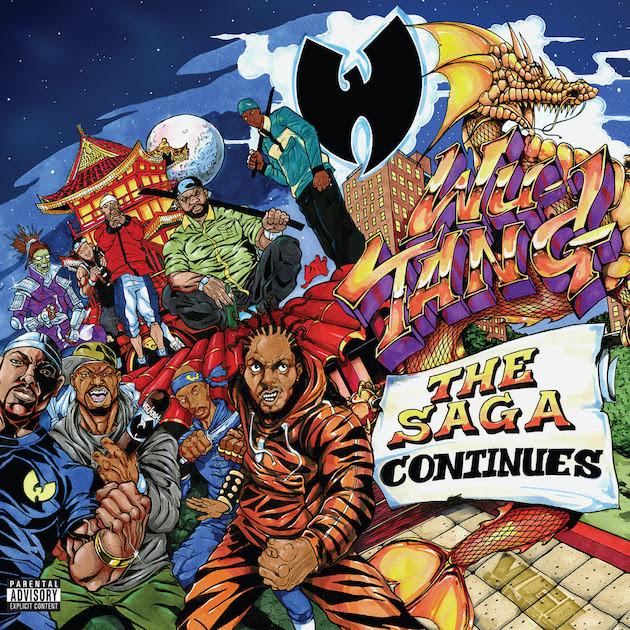 Wu-Tang Clan’s legacy has already been written in the Hip Hop history book. The group made its indelible mark in the ’90s under the leadership of RZA, who devised a five-year plan to dominate the rap game. It was a huge success, leading to multiple classics, an array of solo record deals and a diehard fan base that exists around the world to this day.

With nine members (10 if you count Cappadonna), there’s always been a difficult balancing act in managing this diverse group. The death of Ol’ Dirty Bastard in 2004 was a major blow, and the infighting became more public in the internet age, especially when it came to the direction of their albums.

Complaints of how RZA handled 2007’s 8 Diagrams and frustration over 2014’s A Better Tomorrow muddied their releases. Neither album was bad, but it was evident the rappers in the crew weren’t all on the same page. Still, fans and group members alike have held out hope the Wu would get in sync and release something that matched the heights of 36 Chambers, Wu-Tang Forever and The W.

The Cilvaringz-helmed Once Upon A Time In Shaolin was purported to be just that but it quickly became clear to ardent fans the LP might not be a legitimate Wu-Tang Clan album. Then a new hope emerged when RZA announced Wu-Tang: The Saga Continues, a project with beats by Wu’s longtime DJ and producer Mathematics. The release has certainly been marketed like a new Wu-Tang Clan album, but in actuality, it’s a compilation akin to 2009’s Chamber Music or 2011’s Legendary Weapons. Understanding this is key to appreciating The Saga Continues for what it is.

Without the baggage that comes with the standards of an official Wu-Tang Clan album, this Mathematics-led LP is a success. Mathematics — a core member of the Wu-Elements production team — finally gets the group back on the signature Wu-Tang sound. It doesn’t play like it came straight out of a ’90s basement, but it’s incredibly soulful and employs plenty of kung-fu flick samples. The project even kicks off with the old intro music from Shaw Brothers films, making it clear this is a throwback to the good ole days.

While Mathematics gets things back on track sonically, it’s Method Man who truly carries the team on his back. Johnny Blaze has faced some criticism for never reaching the solo heights of his fellow members (like the triumvirate of GZA’s Liquid Swords, Raekwon’s Only Built 4 Cuban Linx… and Ghostface Killah’s Supreme Clientele). But Meth has always been a strong performer on the group’s albums, and he’s the shining star of The Saga Continues.

The Ticallion Stallion is in top form on the Redman-assisted cuts “People Say,” one of the best Wu-Tang tracks of the last decade, and “Hood Go Bang,” which is way too short for its own good. He also gets a solo spotlight on “If Time Is Money (Fly Navigation)” and takes full advantage of the opportunity with some elite bars. But it’s his performance on “Pearl Harbor” that’s the true show-stealer. Admirable showings from Ghostface, RZA and the late Sean Price become afterthoughts due to Meth’s rhymes on the second verse.

“Till I finish my dessert, nobody eating/ That’s everybody, I mean anybody/ I might leave somebody bleeding/ Or watch me catch a homi, even hit you in the lobby/ Shotty pop ya like a molly, probably leave ya hardly breathing/ Don’t try to Blaze with Johnny even if you got an army/ Dirty money in the laundry, don’t ask why, I got my reasons/ I puff that Bob Marley, might hit you with the Tommy/ You can catch me in the party near the speaker not speaking,” he raps.

Outside of Meth’s heavy lifting, “If What You Say Is True” is a special showcase for the Wu’s underappreciated members. Cappadonna, Masta Killa and close affiliate Streetlife get the chance to shine over a hard-knocking beat, but GZA — in his lone appearance on the LP — delivers the most potent lyrics while utilizing his “half short, twice strong” motto.

“A rhyme is a struggle from conception/ Series of complex maps in all directions/ Totally dependent on an act of breathing/ Learning, depending on an act of reading/ The MC draws in a long deep breath/ Holding it until making it right before it left/ Extracted from it is life-giving properties/ Reacting from it and control the properly,” The Genius raps.

While The Saga Continues gets a lot of things right, there are some glaring issues. Ghostface, who’s usually a highlight of any Wu project, did not bring his A-game. U-God, currently embroiled in a lawsuit with RZA, is noticeably absent. Also, the second half is hampered by singers with pop sensibilities that make for an odd fit.

“Why Why Why” is the first instance of this with Swnkah sounding out of place on what’s already a pedestrian cut. “G’d Up” wastes another killer Method Man outing with a strange second verse sung by Mzee Jones. “My Only One” is the most glaring example of the miscast singers as Steven Latorre takes up most of the record and makes the listener long for Blue Raspberry’s return.

The Saga Continues is not the home run that Wu-Tang Clan fans have been waiting for, but to keep the baseball analogy, it’s an RBI double. Mathematics does some much-needed course correction, perhaps setting the stage for the Ghostface-led seventh studio album to reach heights that Wu fans desperately desire. For now, this compilation gives listeners enjoyable music from the Wu-Tang tree that rightfully exists outside of the official album canon.