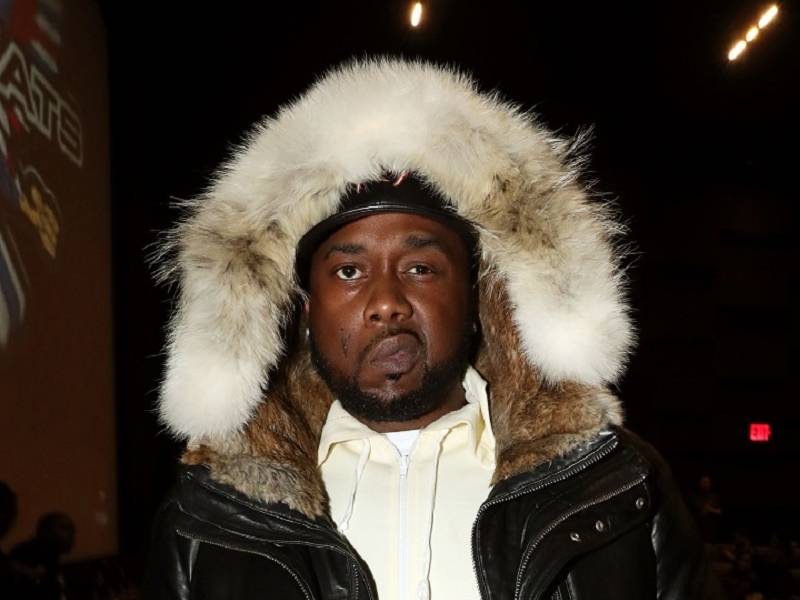 Conway The Machine’s latest release Look What I Became… has allowed him to showcase his versatility. But the project is merely a preview of what he’s got in store for fans.

The Griselda Records artist says his major label debut God Don’t Make Mistakes is unlike anything he’s released before.

“This album is the growth and maturity of Conway the artist and the person,” he tells HipHopDX.

Conway’s first LP for Shady Records is due out after WWCD — a collaborative album with Westside Gunn, Benny The Butcher and Daringer — drops on Eminem’s label in November. With Look What I Became… out now and the Griselda crew’s group effort coming soon, DX spoke to the Buffalo-bred MC about both projects and much more.

In the second half of the two-part conversation, Conway explains why his upcoming solo album is different from his past work and opens up about the support he received after he was shot in 2012. The skilled lyricist also shares details about Griselda’s Shady debut and reveals why he likes working with up-and-coming producers.

HipHopDX: I’m glad you overcame those dark days after you were shot. When did you feel like you started seeing the light at the end of the tunnel? And what kind of support system helped you get to that point?

Conway: It was probably around when I started making Reject 2, honestly. It’s when I started seeing light at my tunnel. I started being comfortable and accepting what it is. This how I’m going to look, this how my shit sound. I kind of just adapted to it. It was around that time. I forget what year that was, maybe like 2014. I finally shook it off. My man Dre, Toya, my mom, aunt, uncle, my nigga Pat-Pat. There was a couple of friends. My little brother and them.

West was very instrumental in my bounce back. West would always make sure I felt the way I’m supposed to feel. I didn’t feel less than, if that makes sense. He’d always make sure I had some fly shit on, pulling up on me when he could’ve been anywhere in the world. He’d sit in the house, him and sis, and just chill with me over there and just order some pizza. It’s the little shit. Giving me the talks about what we gonna do, what we about to do. Building my confidence.

He’d say, “You gonna kill niggas, can’t nobody fuck wit you.” Just building me up. I definitely got to say my family and close homies played an instrumental role in getting me out of those dark days and back into a creative space.

HipHopDX: That’s amazing. Great to hear you had that support and it’s obviously paid off in a big way.

Conway: It’s a blessing. I’m blessed to have the people I got my corner.

HipHopDX: No doubt. There are a few more tracks I did want to touch on on this latest project. On “Half Of It,” it was interesting to hear you on more of a trap-style beat as opposed to the usual gritty and grimy boom-bap. Was that a chance for you to show your versatility?

Conway: Yeah, I just wanted to show my versatility. Just show people that I’m really not just a one-trick pony, man. I’m always big on when people think you going right, go left. I didn’t want people to get used to one particular sound out of me. I felt like they was starting to ’cause if you listen to everything from Reject 1, Reject 2, the Reject On Steroids series, G.O.A.T., Everybody Is F.O.O.D. series, Blakk Tape, it’s like all the music is just super aggressive and on street time. [It’s] talking about different sides of the streets — the robberies, killings and drug dealing and shit.

On this tape, I just wanted to do different types of flows. In order to do that, I had to tap in with some different types of producers who gonna give me a different type of lane. When I’m on them Daringer beats, people expect one thing. That spooky shit, that grimy, that dark, slow, grimy, filthy shit. They ain’t expecting me on a Rick Hyde [beat] coming like that. And still talking my shit but just changing the flow up a little that I knew people wasn’t gonna be used to but that I knew they was gonna love.

HipHopDX: I definitely enjoyed that new wrinkle in your playbook.

HipHopDX: As far as production goes, is it sometimes difficult to find variety when you have someone as reliable as Daringer in your corner?

Conway: It’s not really tough. Sometimes, it’s frustrating though when I do get beats from other producers and reach out, they try to send me the same stuff that Daringer makes. I like dealing with producers for their individuality. I don’t want a nigga to make me Swizz Beatz-sounding type of beats. I would just chat with Swizz. [Laughs] I wouldn’t want Swizz to make me a Neptune beat. I wouldn’t want Pharrell to make me a Daringer-sounding beat. I’m just using them names as an example.

Send me your type, send me your lane. That’s why I’m reaching out! I got Daringer. I can call him. It’s cool though. I’m starting to open up and accept more music now. I like working with up-and-coming producers as well ’cause they still hungry and they ain’t just all shrewd and full of themselves. They hungry and they trying to do some ill shit. I like that energy.

HipHopDX: Are you conscious of trying to keep a balance between established producers and those hungry up-and-comers? On this latest one, you worked with legends like Alchemist and DJ Muggs but collaborated with people like Rick Hyde too.

Conway: No, not really. I can’t say that I go into a project like that. When I’m doing my tapes, I’m just fucking with whoever got the hottest shit. People send me batches and I reach out. It’s funny, that Rick Hyde shit came from Rick Hyde just being hungry. We was riding back from a show or whatever, and he had his laptop out and he just handed me his headphones and played that beat for me. I lost my mind. That wouldn’t have happened if he wasn’t just hungry and trying to show and prove that, “Yo, I got heat too.”

At that time, I really didn’t give people the ear because nine times out of 10, I get 100 beats a day and 99 of them shits is trash. I don’t even like to waste my time half the time. People email me beats and send me beat packs. I’m in the car with him and [Hyde] constantly playing me shit and playing me joints. He hungry. He played me that shit and I lost my mind.

Same thing with JR Swift with the “Vino D” beat. He sent that in. These younger producers, they hungry. They on it. I done reached out to guys to get beats — I ain’t going to say no names — and I still ain’t got them. ‘Cause they already established. It might not even be no funny shit, they just got a lot going on. They big, they established. They got a million things to do: family, responsibilities, they own press and all that shit they got going on. Maybe they just ain’t had the time to send them yet. Not saying that they not coming, but you know what I’m trying to say? But them young hungry dudes? They patch right in, ASAP.

HipHopDX: Look What I Became… is a prelude to your Shady debut God Don’t Make Mistakes. As an artist that’s well established at this point, what’s going to be the difference between your debut album and your previous work?

Conway: The transparency in the music, the stories. This is really an incredible album, and I can’t wait for this shit to come out. Every record is different. Every record is a different topic, a different concept, it’s a different scheme. This shit is just next level for Conway. It ain’t nothing like the Everybody Is F.O.O.D. series or the Rejects or none of my old previous projects.

You can really hear it in the music. The shit I’m talking about, I’m talking about things I haven’t ever told anybody. I’m just opening myself like a book to the world, and I think this shit is dope. I got some surprise features. I didn’t even want a lot of features, but I got a couple on there that I was working with. It’s mainly Daringer and Beat Butcha holding the production down, but I got a couple other producers on there that threw a joint or two at me. It’s different, man. It’s just different. It’s next level. It’s the next level up for The Machine.

HipHopDX: I’m sure the Eminem single’s on there and I imagine Benny and Westside are plugged in too. Is there anybody else you can reveal at this time?

HipHopDX: I know the Griselda group project WWCD is coming in November. What’s the timeframe for your solo?

Conway: Right now, man, it’s up in the air. I really don’t even know. I try not to even think about it. I let what happens happen. I just let it flow like that. It’s coming soon. Should be shortly after what Chine Gunn do.

HipHopDX: As far as that group project goes, not many details about the album have been revealed yet. How much involvement do you have in it and what fans can expect from that as opposed to the Griselda crew’s solo work?

Conway: We all involved with it equally, 100 percent. Me, West and Benny is on every song rapping. Daringer produced every beat, him and Beat Butcha. It’s actually like a real, authentic, all-around Griselda project. There’s no other producers, no other nothing. It’s just me, Daringer, Benny, West and Beat Butcha. [We] was in the studio for three days and made this album. It’s the illest shit niggas going to hear for the year. Album of the year, hands down.

HipHopDX: Was it y’all’s decision to make Griselda’s Shady debut a group effort?

HipHopDX: You’ve already got an extensive catalog at this point, but some listeners may have only started paying attention since you linked up with Shady. If somebody is a new fan, where would you recommend they start with Conway The Machine?

Conway: They can start at the beginning, Reject 2. Hall & Nash, tap into them Reject On Steroids or that Blakk Tape, the F.O.O.D. series. Listen to Look What I Became… first, then go start at Reject 2. You’ll learn everything you need to know about The Machine. I guarantee that jaw going to be on the floor. Like, yo, this might be one of the most impactful artists of our generation. [Laughs]

HipHopDX: You’re definitely somebody that Hip Hop heads need to be listening to if they aren’t already.

Conway: My story, the shit I been through, everything I overcame and the music I’m putting out, the quality of it on a consistent basis, it’s only getting bigger and bigger. Look what I became!

HipHopDX: To wrap up, I know you’re a fellow wrestling fan. You and Westside often show love to the legends in your music. Who are some of your favorite wrestlers these days?

HipHopDX: Those are some good picks. Are you enjoying AEW too?

Conway: Yeah, I fuck with that! And I can’t forget of my boy Randy Orton too, fa sho.

Read Part 1 of DX’s interview with Conway The Machine here.