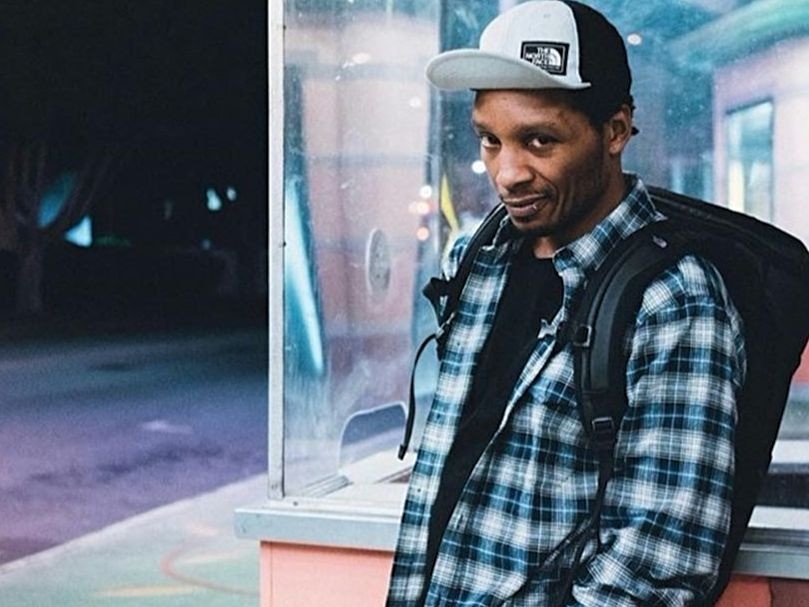 Oakland, CA – Del The Funky Homosapien has delivered the first taste of his forthcoming album with producer Amp Live. Titled “Wheel Of Fortune,” the song serves as the inaugural single from the Bay Area artists’ collaborative effort, Gate 13.

Opening with a minimalist beat, Del takes the reigns “straight from the gate” before the song switches up to a more reggae-infused vibe.

Listen to “Wheel Of Fortune” above and read more about Del’s creative process below.

Del The Funky Homosapien is an indisputable Bay Area Hip Hop luminary. As a member of the Hieroglyphics crew, he’s been pumping out albums since the early ’90s. Part skater rap, part boom-bap Hip Hop, he carved his own unique lane when he dropped his first solo album I Wish My Brother George Was Here in 1991.

Now, he’s back. On Tuesday (March 6), the hygienically inclined MC and cousin to Ice Cube revealed he was putting out a new album with producer Amp Live called Gate 13. It serves as his first proper album since 2014’s Iller Than Most.

“The title is alluding to opening up a way to some bad shit,” Del tells HipHopDX. “Amp and I both be talking about tech shit, musical trends, how shit evolve, you know, nerding out on music. We’ve known each other for years, and got common interests as far as composing music and dissecting it.”

Del says Gate 13 has a few guests on it, including Zyme and Living Legends MC Eligh, but he’s been mostly focused on “reinventing” himself on the project. He started studying comedic writing and battle raps.

“I watch battle rap constantly,” he said. “I need that kind of hard creative expression. I’ve been introducing new information and working on making the album a better experience all around. I’m being cognizant of my age range and what I can get away with saying. What’s ‘appropriate’ I guess, culturally. Not like I’m censoring myself, but some things I don’t really have to say.”

While humor has always been an integral part of Del’s music, he admits age has somewhat mellowed him out.

“I still goof around a little bit, which is another thing I kinda had to work on,” he said. “It seems the older you get, the harder it is to not take shit seriously. [The album is] not deeply personal but you looking at me from the outside. I gotta make it fun to listen to but everybody got their behind-the-scenes. With fun, it’s easy when you young, got hella time and not many responsibilities. Music is my place to express and have fun.”

When asked where he’s been for the past four years, the Gorillaz collaborator explained he was wrestling with some “life shit.”

“Dealing with ratchet people, shit drags you down and drains your energy — the business, as well,” he said. “You learn people be full of shit sometimes. It can make you bitter. That ain’t good for me or for my business. Hip Hop I feel should be fun to listen to above anything else.”

Del confessed he had to sort out some personal things before he could effectively finish an album. He found it was influencing his musical output too much — and not in a good way.

“I’m into humor and I study writing humor, but in general, life was starting to make my shit come out like harsher and not as funny,” he said. “I had to focus on things differently. I decided to study humor since I was always into it. Battle rap made me go there too since wordplay is 50 percent of humor at least, so I just absorbed everything and took the good stuff that made sense to me.

“Battle rap is the best. They the best rappers in the world. Some of those cats know what they doing I noticed after awhile. I literally go to sleep and wake up to battles.”

Gate 13 is expected to arrive on April 20. While he’s confident the record will please Hip Hop purists and longtime fans, he did take a slightly different approach when making it.

“It’s still me but I just tried to refine things lyrically and content-wise,” he said. “The sound of it is like a mixture of ’80s sounds and today’s electronic sounds. Amp is off the chain. We working on some instrumental shit too. But keeping my sanity is the main goal.”