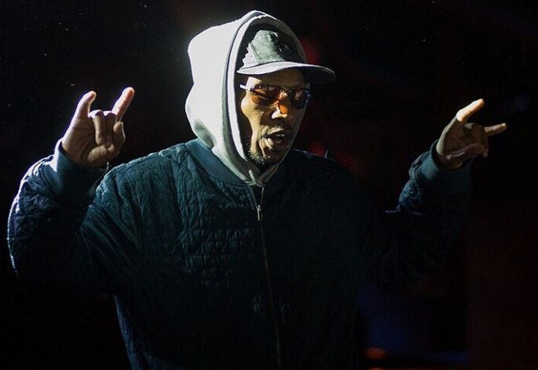 Boston, MA – It’s been 25 years since Del The Funky Homosapien emerged with his seminal Parliament-influenced debut album I Wish My Brother George Was Here. Since then, the “Mistadoblina” rapper has championed the indie rap game as both a solo artist and as a founding member of the legendary underground rap crew Hieroglyphics, with whom he pioneered the online digital space in the music community at large. With no pun intended, the Oakland MC has made his indelible mark in rap history.

But Del had his share of humble beginnings in the rap game. At age 17, he was a worthy squire under the tutelage of Ice Cube, his first cousin and legendary leader of Del’s original crew Da Lench Mob. Around the time he made his initial feature on Cube’s debut solo album Amerikkka’s Most Wanted song “Turn off the Radio,” Del retained much knowledge from his experience as a ghostwriter for Cube and Da Lench Mob. Despite his reverence as a freestyle rap god, Del’s formidable songwriting skills have been integral to his career’s longevity.

While currently on tour, the D.E.L. recently spoke to HipHopDX in Boston for an exclusive interview about his early days in the rap game, and talked about how ghostwriting burgeoned his rap career. Also, he offered his take to the discourse on how to evaluate today’s rap artists who use ghostwriters for their creative process while claiming to be the best in the industry. Lastly, in light of the popular alternative rock cartoon band Gorillaz recently announcing their highly anticipated album in 2017, the Funky Human Being detailed how he reluctantly contributed his verse on the band’s initial hit and platinum single “Clint Eastwood,” which has since become Del’s encore song at his concerts.

I’m a true Hip Hopper, so I feel the core of what would make fans upset about [it]. Like if you didn’t write you own raps, then what part of the game is that? You know what I’m saying? But as far as profession, a lot of people get into the game as writers first. Like [R&B legends] Ashford & Simpson were writing for other people first before they made their own shit. A lot of people start out writing like Ne-Yo and The-Dream. It’s a cottage industry of writers. I just think it’s two different viewpoints. Both of them are valid, I guess. It just all depends on what you’re looking at. If you’re a true Hip Hopper, you’re looking at it like if you didn’t write it, nigga what? Like really dude? That’s like the ultimate thing for some people.

But if you know about what really goes on, and how shit really works in real life, if you can’t come out at the moment, you can eat just by writing people’s shit. Not everybody’s got the skill that you might have, and you can get paid off of that. That’s how I got paid. I’ve said that on stage. I remember that I couldn’t come out because [former Lench Mob member] Yo-Yo was coming out first. So to put some bread in my pocket, Cube enlisted me to write some shit. He wrote [my second hit] “Dr. Bombay” actually. But it was like that, though because everybody was around. You know, Cube wrote several songs, and a lot of them he didn’t use. He would just give them to Da Lench Mob, he’d just give them to Kam, or give them to Yo-Yo. He just had a book of them because that’s all [he did]. So he just had stacks upon stacks of shit that he might not even use. But I had the chance to do that just to get some bread in my pocket. And you know, Cube didn’t need me to write no raps for him, and Yo-Yo didn’t need me to write no raps for her. It was just an opportunity to get my feet wet.

I’ll tell you what really happened. I had finished doing Deltron 3030 with [Gorillaz producer] Dan the Automator. He was in San Francisco, and I said, “Take me home.” This fool busts out with “Hey, I just need a verse for this song. Can you do it?” And I’m like “I don’t wanna do no verse, take me home.” You gotta peep Automator: “I know you can do it in like 15 minutes.” And so I did the shit in 15 minutes, and that’s how it became.

He had the song already, and he had other motherfuckers rapping on it, but he didn’t like their raps. So he was like “Okay, I know Del can do it better.” He forced me to do it because I like take me home!So every time I see Dan now, I’m like “Yo, I appreciate you.” Hey, that (song) bought my house! That was a total fluke, and nobody knew the shit would blow up like that.

But the way I did it, I got a gift certificate from my mom for like Christmas or something for Barnes & Noble. And I ain’t used it yet, right? So we went to Jack London Square and we saw Barnes & Noble, we go in there, and I see a book called How to Write a Hit Song. And in my mind, I’m thinking “pssst” (Laughs), and in my other mind I’m like you ain’t even looked at the shit yet. You don’t know what you talking about, what you laughing at? So I picked it up and told my mom I’m gonna buy this shit. The first page it said, “Above everything else you gotta be original. You’re not gonna make it if you’re not original.” And I said, “I knew it! I fuckin’ knew it! I knew that it in my heart. All these motherfuckers is copying motherfuckers!” That book How to Write a Hit Song told me that on the first page, so that made me be like it’s real. When I did that, I used everything I learned to write that song. And it became a hit, and it really worked.

Dan putting me on Gorillaz is probably the one thing that kept me floating. That introduced me to a lot of people who heard the rest of my shit. That’s my only platinum record. Even though, I tell motherfuckers that it’s not my record. He threw me on it as an afterthought.