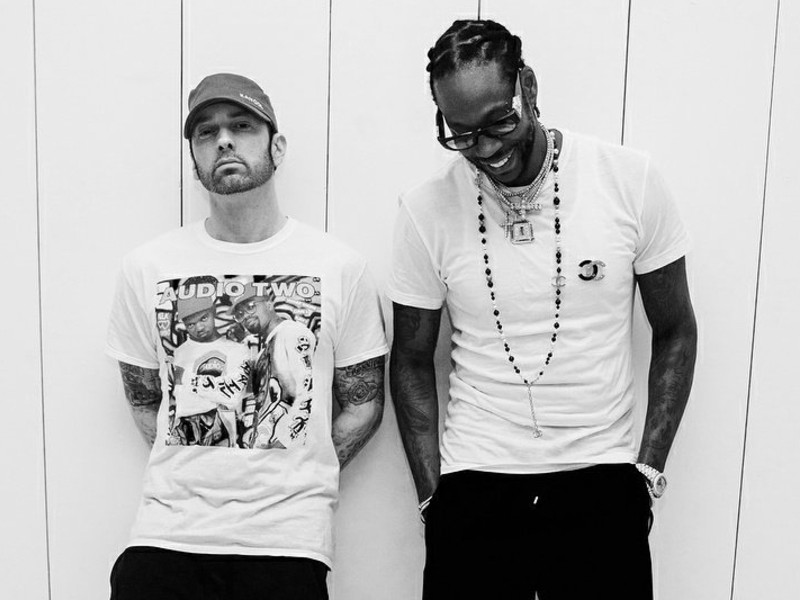 After 2 Chainz posted (and deleted) an Instagram photo of Eminem’s Revival tracklist showing his disapproval via a series of emojis, the Atlanta trap king has returned with another one. This time, he’s changed his tune.

On Thursday (December 7), 2 Chainz shared a post from Genius featuring a photo of the two MCs together.

The Pretty Girls Like Trap Music rapper wrote a caption of his own that read, “Grateful for the opportunity, new music on the way!”

Grateful for the opportunity ,new music on the way !

Genius is referring to a recent interview Phresher did with ThisIs50 where he explains how he wound up on Revival. During the conversation about “Chloraseptic,” the Brooklyn artist mentioned 2 Chainz was also on it but evidently his verse didn’t make the cut.

Over the summer, 2 Chainz posted multiple photos of himself with Slim Shady and talked about the possible collaboration in an interview with DJ Drama. But then, during an interview with Hot 97, he claimed, “I don’t know anything.”

When the Revival tracklist was revealed earlier this week, 2 Chainz was noticeably absent.

Revival is expected to arrive next Friday (December 15).

(The original version of this article was published on December 6 and can be found below.)

There has been a wave of negative feedback about the tracklist for Eminem’s new album, Revival, with the biggest complaint being the lack of rap features, save for Brooklyn’s Phresher. One artist who seemed to be as blindsided as the many fans vocalizing their distaste via social media is rapper 2 Chainz.

In an Instagram post that simply included included three emojis (eyes, angry face and punch), it’s unclear whether Chainz is upset about his feature not making the cut or the tracklist in general.

Based on the information given during interviews this summer, it could be the former.

The Pretty Girls Like Trap Music rapper had all but confirmed a collaboration on the upcoming album this past summer, taking a photo with Em and recounting the experience of recording the song in an interview on DJ Drama’s Streetz Is Watchin.

“That’s how I know I can rap,” 2 Chainz stated when talking about the experience. What was originally supposed to be a hook turned into a full verse, which Em apparently approved of. “When it was over, Eminem came up to me and said ‘Man, how the hell did you rhyme tabernacle with Adam’s apple?’”

He then told Drama matter of factly, “He’s got a project coming out.” However, he later back peddled on the story during a Hot 97 interview, claiming he had zero knowledge of the collab. “I don’t know anything.”

Perhaps 2 Chainz was well aware that his song wouldn’t be making the cut, as the rollout of Revival seems to be incredibly calculated. Another possibility is 2 Chainz is trying to throw fans off the trail.

A popular fan theory suggests Revival is a double album, with the second disc being more Hip Hop-centric. This would make sense as the lack of features from some of Em’s latest signees — namely Boogie, Westside Gunn and Conway — seem like enormous missed opportunities for Shady Records.