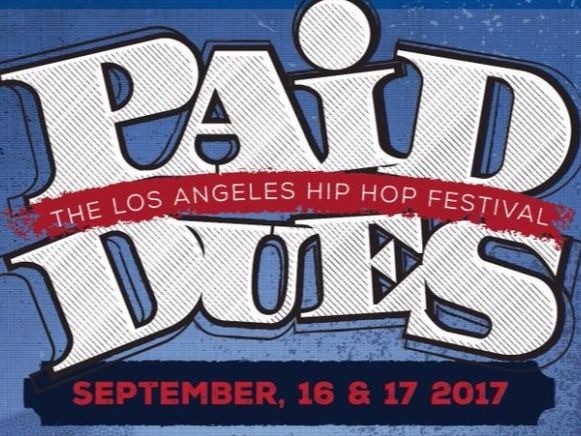 Los Angeles, CA – The Paid Dues Hip Hop Festival, which was scheduled to go down in Los Angeles on September 16, has been postponed. According to an Instagram post, the highly anticipated event was put on hold due to “unforeseen circumstances.”

Although it’s unclear what exactly those circumstances are, it’s possible they’re tied to Lil Wayne, who was supposed to headline the massive event. Wayne suffered multiple seizures last Sunday (September 3) and was hospitalized for a few days in Chicago.

Doctors reportedly told him he needed to rest for two weeks, which would put his Paid Dues performance smack dab in the middle of his rest period.

But on Wednesday (September 6), Wayne’s manager Cortez Bryant told TMZ that Wayne is a “workaholic” and seemed to suggest he would continue working.

HipHopDX reached out to Paid Dues founder and host of the DX Breakdown, Murs, and are awaiting his formalized statements.

Full refunds are available at the original point of sale.

Check out the full announcement below.

(The original version of this story was published on July 13, 2017 and can be found below.)

Paid Dues Festival founder and Strange Music signee Murs teased a “big” announcement on Tuesday (July 11). It turns out the celebrated Hip Hop musical festival is back in effect after a four-year hiatus. Originally held in the Inland Empire, the festival is being moved to Los Angeles’ Pershing Square and goes down the weekend of September 16 and 17. There are over a dozen acts confirmed, including Lil Wayne, The Cool Kids, Ab-Soul, Ghostface Killah, Raekwon, G Perico and Freddie Gibbs. Murs felt the timing was finally right to resurrect the event.

“We got a lot of financial support from our new partner Sane Asylum,” Murs explains to HipHopDX. “The persistent demand from the fans, and the awesome staff at Pershing Square providing a unique and beautiful venue that was actually happy to work with a Hip Hop show.”

The Living Legends MC (and current host of HipHopDX’s The Breakdown) established the festival in 2006 and executed one annually until 2013. Over the years, the notoriously extensive lineups always boast the best of the best in Hip Hop. Past performers include Macklemore & Ryan Lewis, Black Hippy, Aesop Rock, Mobb Deep, De La Soul, Joey Bada$$, Wu-Tang Clan, Odd Future, and Black Star.

“Coming back feels good,” Murs says. “Coming back to L.A. feels good as well. It makes it feel new and familiar all at the same time. There’s also a lot more competition in a lane that myself and Guerilla Union helped establish, and competition is good. I’m glad the live music scene is popping. It was a challenge to find out where we fit in this new landscape. But I think we put together a solid and diverse line-up same as we used to.

“It’s unique, well priced and it’s super crazy because it’s super accessible,” he continues. “For the first time you can take the Metro to the show. Not only has the L.A. Hip Hop community flourished, but the city in general has grown. You can now take the train to a Hip Hop festival in a park owned and operated by the city. You can send your kids and know that they will be safe or maybe like quite a few of our fans come as a family. Times really have changed, and while we still have a lot of growing to do, I am proud of my scene and my city. It feels good to be home.”

Hosted by underground Hip Hop staple 2Mex and DJ R-Tistic, the event is also like a reunion for friends in the Hip Hop community who haven’t seen each other for awhile. 2Mex just bounced back from a major health scare, which cost him half of his leg, and Murs knew he had to be at the helm this year.

“2Mex has been the only artist to be on every Paid Dues in some shape or form,” he says. “So, he had to be on this one. His recovery has been amazing and I knew he had a new record coming out. So the timing couldn’t have been more perfect.”

Carrying on the tradition, Paid Dues is offering the stage to several more unknown acts such as Ill Camille, Jabee and Cash Lansky & Marley B, something Murs clearly considers important for the culture and the festival in general.

“We remain the only brand ‘breaking’ new artists,” he explains. “Many artists that are dominating the market now got their first festival look on the Paid Dues stage. I’m super stoked to continue that tradition by being able to support acts like EOTR, Ill Camille, Jay Worthy and Jabee — who you may not know now, but who I believe have a lot of potential. And that’s a big component of Paid Dues.

“A couple people have criticized us for having [Lil] Wayne headline,” he adds. “But he’s someone who’s been releasing music since age 12. He’s definitely ‘paid his dues.’ And aside from that what I see is his die hard or younger fans who may not be into ‘underground’ that are going to show up early to be in the front row. And press themselves against the front barrier. And wait hours for him to take the stage. But in the process they get to see all these dope artists that they never heard of. That’s what festivals are about — new music, new friends and new experiences.”

Tickets start at $79 and can be copped here.