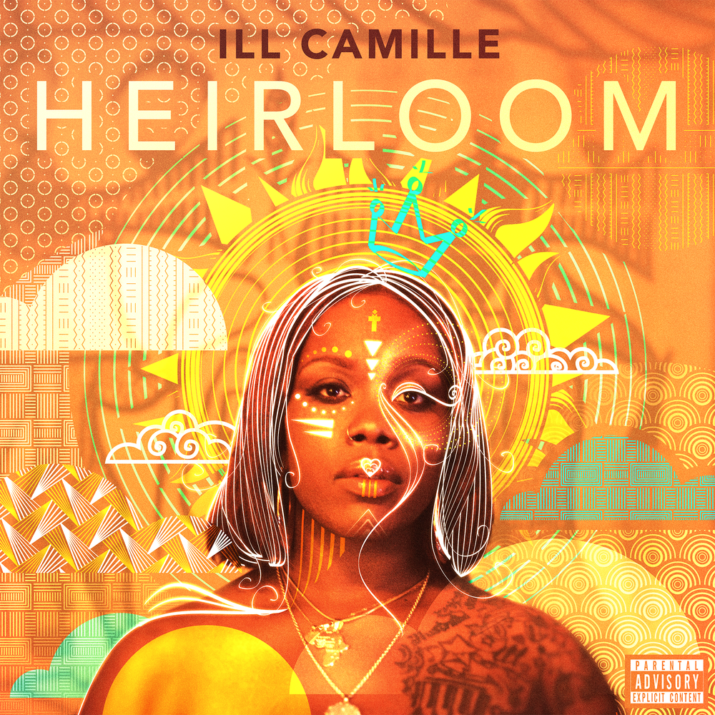 In an uninspiring time where commercial marketability is placed at a higher premium than talent, Ill Camille sidesteps such perplexity to make art focused on honest introspection. Well aware that she’s an anomaly to a rap world intimidated by uncontrollable femininity and record labels interested in selling one-dimensional fantasy, Camille has found it necessary to portray her every facet and mood with transparency. In the four years that have passed since the Los Angeles native’s last LP Illustrated, she took an extended hiatus to live through the experiences that became crucial inspiration for Heirloom, by far her most personal work to date.

Designed as a tribute to her lineage and ancestry, Heirloom is a celebration of Ill Camille’s obstacles, evolution and overall hope for her musical gift to affect society. Leading off with live instrumentation to introduce the album, “Black Gold” is foreshadowing for the 16-song journey through thoughtful storytelling. Speaking to the daily struggle of the blue collar workers and hood queens representing sections of L.A. far removed from often romanticized glamour, here she recognizes her resilience in the midst of it all noting: “Forgot to drive slow, went off track a few times/Thank God for a hard flow and an impeccable grind.”

Following a period where Ill Camille found her back against the wall, Heirloom was created as a catharsis for the very situations that got in the way of its productivity. “Fight On” speaks to the personal strength necessary for ascension as she honors the life of her incarcerated brother over drums akin to a marching band at a rally. Frequent rhyming collaborator Damani Nkosi backs her up here and on “Home” (an intergalactic banger crafted by Georgia Anne Muldrow) where Camille briefly touches on suffering a stroke this past fall. The album’s emotional centerpiece comes by way of “Spider’s Jam”, as West Coast legend Battlecat recreates the feeling of a live jazz session. Most critical to the album’s very existence, this song honors her grandparents and extended family tree while explaining how her spirituality and appreciation for music came to be.

While Heirloom’s overarching theme was shaped by blood relatives, it was largely constructed around Ill Camille exchanging creative energy with her most talented support system. Produced by beat scene extraordinaire Mndsgn, the bouncy lead single “Almost There” is an ode to perseverance through the come up that features recent TDE signee SiR. A man of multiple talents who not only engineers the entire project, here the rising R&B sensation delivers a rap verse while the sultry vocals he’s recently garnered acclaim for appearing on “Trust Me”. Here the duo is backed by eclectic musician Iman Omari, as Camille makes certain to remain self-aware while clouded by momentary lust, leaving the song truthful and open-ended without becoming a precautionary tale. Long time listeners will also recall Iman’s appearance on the uplifting “Live It Up”, an older single that’s been deservedly rewarded with a proper home.

Despite Heirloom’s cohesive soulful sound, Ill Camille can’t be easily classified as a certain type of MC, but she most consistently voices the concerns of everyday women that go forgotten within mainstream channels. “Slip Away” conveys the urgency of maintaining self-esteem during heartbreak, while “Still A Lady” seeks for a solution to the strained state of black love resulting from societal stereotypes and trickled down generational trauma. Celebrating those who paved the way for her career to stand a chance, “Lighters” places a more mellow spin on Queen Latifah’s “U.N.I.T.Y.” and “Sao Paulo” honors Lauryn Hill (whom she considers one of her greatest influences) paying overt tribute to hits “Doo Wop (That Thing)” and “Everything Is Everything”. Hardly approached as remakes, Camille is able to show both respect for the past and a desire to make present strides for her gender at a time when progressive womanhood seems to lack more than ever.

Respected for some time as a key element within L.A.’s Hip Hop resurgence, Ill Camille shed blood, sweat and tears aiming for Heirloom to elevate her career. Giving out lessons as she’s learned them to help her audience relate and grow accordingly, her soul searching is what some would consider “woke” without it being a cliché. Clocking in at 78 minutes in length, Camille’s uncompromising messages are sure to overwhelm those with short attention spans, and while her aesthetic may be too raw to ever cross over, she will continue to reach those demanding heart from music.