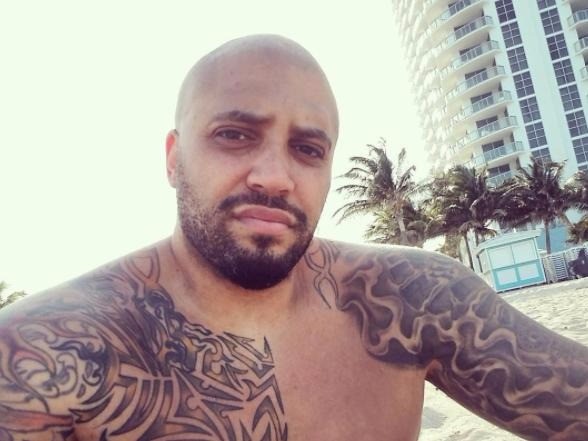 Police were called to the scene on August 8 after he threatened to kill several bank employees. Once they arrived on the scene, he allegedly went at them, prompting officers to pepper spray him and put him in handcuffs.

According to TMZ, a witness said Taylor was heard telling an employee, “I will fucking kill you.”

He was quickly arrested and charged with terroristic threats, obstruction of justice and disorderly conduct. In May, he was arrested for misdemeanor battery at a Miami beach resort.

The actor allegedly punched at least two people, including the manager of the restaurant, after a fight broke out following an argument. Several employees had to drag Taylor out of the restaurant in order to put an end to the chaos.

Taylor was charged with four counts of assault, one count of criminal mischief and one count of disorderly conduct.

TMZ reached out to Taylor who said he was jumped, but he wouldn’t elaborate any further. His attorney claims Marcos never punched or kicked anyone, and was simply defending himself.

Taylor was arrested back in May for a similar incident at the Sunny Isles Beach resort in Miami. He was charged with misdemeanor battery. The case is reportedly still pending.

(The original version of this article was published on May 15, 2017 and can be found below.)

In a case of life imitating art, actor Richard Taylor, who played Marion “Suge” Knight in the 2015 biopic Straight Outta Compton, was arrested early Monday morning (May 14) after an alleged assault at the Sunny Isles Beach resort in Miami, according to The Miami Herald.

The melee initially started over a fairly benign request by a uniformed security guard who asked the actor to remove his foot from a table in the lobby of the resort. Taylor replied, “Leave me alone,” and allegedly refused to comply. The guard then called police and while waiting for officers to arrive, the report states Taylor approached the guard and pushed him to ground before “a full physical fight ensued.”

Unfortunately for Taylor, when police arrived on the scene, they witnessed the six-foot-three, 265-pound powerhouse “pick the victim up and slam him to the ground.”

Consequently, Taylor was arrested on a misdemeanor battery charge and is being held at a Miami-Dade jail. Two days earlier, it appears his vacation was going a lot smoother as indicated by his Instagram account.

Me at the beach with my #Queen. She's in the water. I'm chillin cause I can do that on #vacation

During the highly successful F. Gary Gray-directed film which grossed more than $200 million, Taylor’s character links with rapper Dr. Dre (played by Corey Hawkins) to start Death Row Records. The actual Knight is currently jailed while awaiting trial on a murder charge stemming from a 2015 hit and run incident.