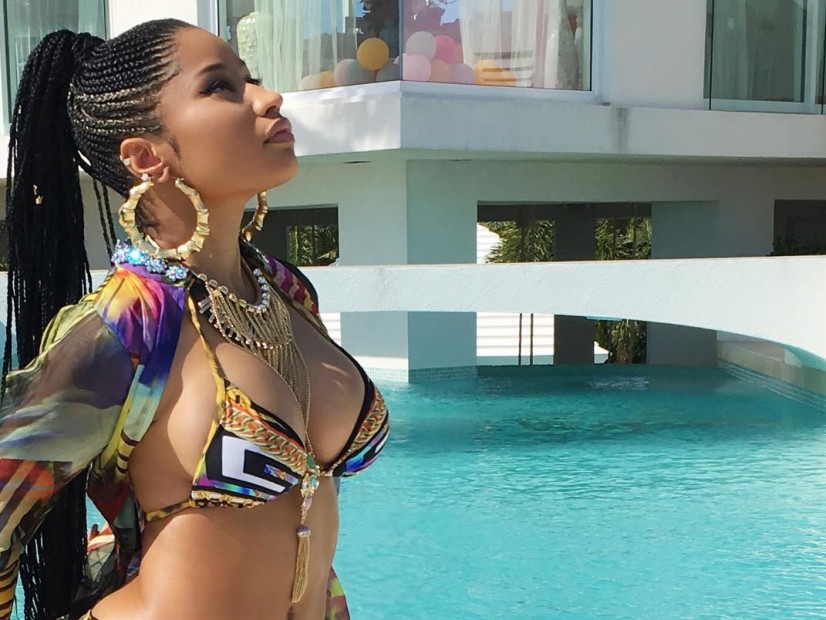 Remy Ma’s Nicki Minaj diss song “SHETHER” got snatched off the internet (and not because of Nas), then she went on an apology tour rescinding the track, declaring that she’d rather come together in the name of women empowerment.

Nicki didn’t care about any of that and released three songs: “No Frauds” featuring Lil Wayne and Drake, “Regret In Your Tears” and “Changed It” which also features Weezy. “No Frauds” was the obvious song aimed at Remy while “Changed It” included a few subtle jabs that the Queens rap star highlighted with a lyric video via Twitter.

Most reactions to “No Frauds” said it is hardly a diss song and is merely a money play by creating a song that could easily be played on radio, unlike Remy’s “SHETHER” since it lifted Nas’ “Ether” beat and was never cleared.

So, while Nicki can run up a check with all three songs, Rem has been handicapped from accomplishing the same feat and has been generously given 72 hours to create a hit song by the self-professed Queen of Rap. This all despite the multi-Platinum selling rapper taking forever and day to respond to Remy’s decimating diss track.

It’s safe to say Safaree had nothing to do with “No Frauds.” He disappointedly called her out for the way the songs were structured on Twitter.

Drake was allegedly dropping More Life this weekend after it being delayed over and over again. The playlist’s rumored tracklist was revealed recently but the songs are somewhere being held hostage on 40’s hard drive until March 18…allegedly.

March 9 marked 20 years since The Notorious B.I.G. was murdered in Los Angeles at 24 years old. To remember his treasured legacy, Diddy, Faith Evans, Lil Cease and Nas, among others paid tribute to the highly regarded Hip Hop luminary. The HipHopDX staff also curated a piece to accent how Biggie’s music transformed their lives.

The rapper born Christopher Wallace was killed in a drive-by shooting on LA’s Wilshire and South Fairfax Avenue intersection and the murderer has yet to be publicly identified.

Big’s mom, Voletta Wallace, spoke about her son’s death and revealed she knows who killed her son that fateful night and believes the Los Angeles Police Department knows as well. The case remains unsolved.

“I have a very good idea who murdered Christopher and I genuinely believe that the LAPD know exactly who did too,” she said. “They’ve done their investigation, but they just refuse to move forward. I don’t know why they haven’t arrested who was involved. It seems to me that it’s one giant conspiracy, and someone is definitely being protected somewhere down the line.”

Nevertheless, his honor has been celebrated not just within Hip Hop. Brooklyn’s Met Food Supermarket celebrated his life with grocery bags and New York Democratic Representative Hakeem Jeffries gave a speech to show his appreciation.

Young Dolph spoke with Features Editor Ural Garrett at a late-night afterparty in the Hollywood Hills this week and when asked about his nasty public feud with Yo Gotti, he dismissed it as old.

The Memphis rapper’s life was supposedly threatened in Charlotte on February 25 over CIAA weekend with 100 bullet shots to a van he was reportedly occupying. It’s a subject he’s unable to talk about at the moment. Thanks to the van’s bullet proof encasing, he survived and now he’s releasing a new album titled Bulletproof.

Editor-At-Large Shirley Ju caught up with Houston’s Ugly God this past weekend and they chopped it up about the controversial “mumble rap” topic. He calls the word “disrespectful.”

“I like using Lil Yachty as an example, that’s a homie of mine,” he says. “They’ll talk so much stuff about his music, and then he’ll drop more music. And they’ll talk shit about that. What doesn’t make sense to me, if you feel like he’s trash, why the fuck would you listen to something else he dropped? If you hate it, you wouldn’t even pay any mind or even pay attention to him.”

Producer Blockhead spoke with Media Manager Kyle Eustice and revealed the title of his forthcoming album as Funeral Balloons and explains why he’s not a horrible person.

“I think people have a misconception about me as a human being,” he says. “I’m not a serious person. I don’t really give a shit about much, so when I write, it was just me blathering in a funny fashion. [In the blog,] I would take ridiculous, harsh stances on trivial things and try and make them funny. Some people would read that and think I was passionate about these pointless things and feel some sorta way about it. Next thing you know, I’m arguing with strangers on the internet.”