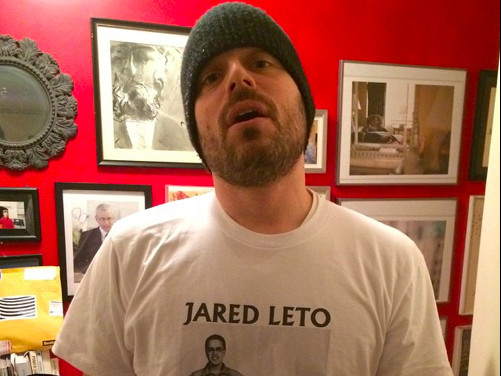 Manhattan native Tony Simon, better known by his stage moniker Blockhead, literally thinks his head is shaped like block, hence his name. It was also the first alias he rapped under. However, those days are gone. The longtime producer/DJ has been churning out brilliant instrumental albums since 2004’s Music By Cavelight, but is also the mastermind behind several of Aesop Rock’s productions, including material from 2001’s Labor Days, 2003’s Bazooka Tooth and 2007’s None Shall Pass. Their last collaborative track was 2015’s “Cat Food,” another example of their undeniable musical compatibility.

“It’s gonna be a while because of scheduling with the label, Backwoodz Entertainment,” Simon says in an interview. “I’m looking at a late summer or early fall release.”

Until then, fans will be happy to know Detroit’s Young Heavy Souls is reissuing 2007’s Uncle Tony’s Coloring Book on vinyl for Record Store Day (April 22), an album peppered with hilariously titled songs like “Cheer Up You’re Not Dead Yet” and “Grape Nuts and Chalk Sauce,” a look into who he is as a person. However, not everyone gets Blockhead’s sense of humor. For years, he ran the Phat Friend blog, which gave him a chance to be as ridiculously sarcastic and offensive as he wanted to be. In fact, one song on Funeral Balloons, “Gobsmacked,” is inspired by an online argument he got into after one of his infamous posts.

“I think people have a misconception about me as a human being,” he says. “I’m not a serious person. I don’t really give a shit about much, so when I write, it was just me blathering in a funny fashion. [In the blog,] I would take ridiculous, harsh stances on trivial things and try and make them funny. Some people would read that and think I was passionate about these pointless things and feel some sorta way about it. Next thing you know, I’m arguing with strangers on the internet.

“The most ridiculous misunderstanding, and there have been many, was one time I tweeted a joke about Razor scooters and some dude lost it on me,” he continues. “Like he was raised by Razor scooters and I had disrespected his family. It was so weird. Another time, some girl tweeted that I was a disgusting and terrible person with no other context. I retweeted it and added some smarmy response. She responded and it turned out she read one of my ‘Fuck/marry/kill’ articles and took it way too seriously, even though I’d always specifically warn people how unserious that particular article always was. At some point she told me she was ‘gobsmacked’ by my terribleness and I told her I was gonna name a song that on my next album. I kept my promise.”