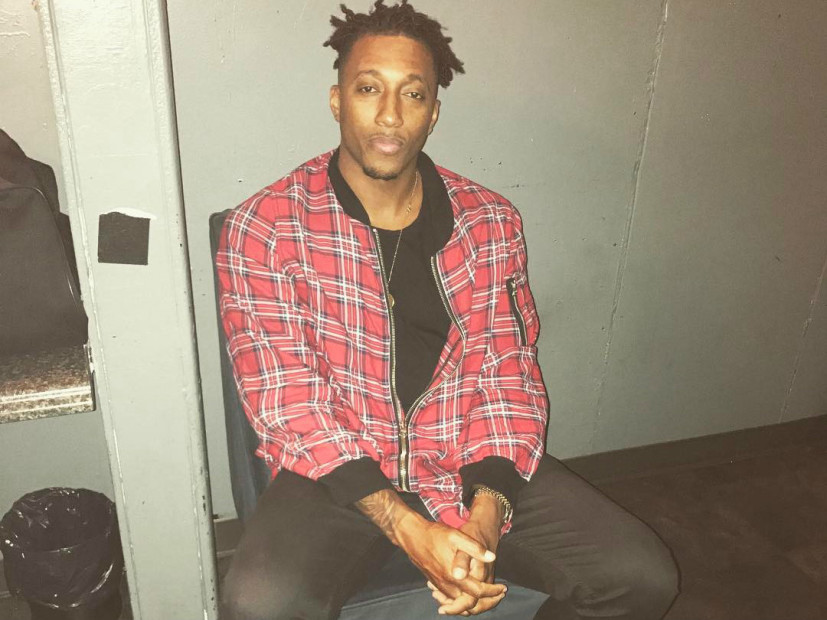 Lecrae Was Hesitant To Name His Radio Single "Blessings," But Here's Why He Did It Anyway

Lecrae is taking a shot at radio with his new single, “Blessings,” that drops tomorrow (January 27). After more than a decade in the industry, the Atlanta MC has hustled his way through the independent scene often carrying the sometimes-dreaded title of “Christian rapper.” But perhaps that label is what will make his version of “Blessings” stand out, as he explained to HipHopDX before his show at The Roxy on Wednesday (January 25).

“I get to change the narrative a little bit, let people see some of the behind-the-scenes of what I mean when I say it and my perspective,” Lecrae says. “My thing is just like I always tell people before you complain, be grateful you got breath to complain with, just appreciate the little things. Just the small blessings that you just have. You woke up, you can walk and you’re alive. We lost people last year, so just all those little things.”

The track features Ty Dolla $ign, who Lecrae met at SXSW through mutual connections around the time he was crafting the first Church Clothes mixtape four years ago. The Los Angeles artist appears on another song of the same name that was part of HipHopDX’s Best Albums of 2016, Chance The Rapper’s Coloring Book. Not to mention Big Sean’s “Blessings,” which peaked at #28 on Billboard’s Hot 100 list in 2015. But Lecrae knew “Blessings” was the right name for his song.

“We already had the song in the can. I remember because we were actually working out here and we had the song in the can and then Chance’s project came out and I was like, ‘Dang,’” he says. “But it was like, man, we could have called it ‘Count It Up,’ or something like that, but I felt like it took away from that whole moment, so it was kinda like, man, it’s all love. A good song, everybody you move on. I’m just gonna troll America.”

Besides the Ty Dolla $ign feature, Lecrae says the production — from APluss of Ear Drummers — completes the vision of what he wants to do with his music. The song features plenty of 808s and hard-hitting snares over a smooth backdrop.

“It knocks,” Lecrae says. “It’s perfect for radio. If you never knew my music, it’s a perfect new introduction ‘cause it’s like it’s the balance of who I am. Everybody can enjoy it from a music standpoint, but it still has a meaning to it, which matters to me. Substance still matters to me.”

Even though his first album, Real Talk, dropped in 2004 and he has a gold-certified LP in 2014’s Anomaly, Lecrae was performing as a “Who’s Next?” artist for Power 106’s event in Hollywood. The Reach Records founder isn’t fazed by the title.

“It’s all good, man,” he says. “I think that’s what keeps you moving is humility. I look at it, too, it’s like some people get too caught up in their egos and it’s like, ‘Oh, I’m bigger than this. I’m better than this.’ And it’s like, nah, man, every day, I look at it like this, every time I put out music, I look at myself as a new artist, because there’s always a lane that you aren’t known in or a place where you aren’t known in. So if I go to, I’m trying to think of a place, I don’t know. If I go to like Hong Kong, I’m not who I am in America. So it’s like, man you gotta start from scratch and build. So for me, it’s like for radio, I am a new artist. Nobody’s heard me really on radio, so it’s like who’s next, but it’s Power 106, it’s radio, nobody’s heard me on radio. They know me underground. They know me from everything else, but not radio.”

The promotion for “Blessings” featured clips from many pop culture figures, including Tupac, Lauryn Hill, Kevin Durant, Stephen Curry and a portion of Allen Iverson’s Hall of Fame induction speech to show that Lecrae wants his music to be for all people.

“It’s not like this weird like ‘Oh, blessings, it’s super churchy,'” he says. “Nah, everybody from Allen Iverson to Lauryn Hill to Tupac references faith and spirituality. It’s like that connection that’s bigger than that. You don’t have to be, I just want everybody to be able to feel like ‘I don’t have to be a certain type of person to appreciate this song. I don’t have to live a certain kind of way to appreciate this song.’ This music belongs to everybody and having like Tupac and Lauryn Hill and Steph and KD have commentary, I think that just set it up for people to be like, ‘Ok, what’s going on?’ It’s retweetable for everybody.”

Reach Records has continued its mission of reaching everybody by opening a four-studio compound in Atlanta to create a welcoming space for artists. That’s where Lecrae linked up with APluss and several others. He was spotted on Instagram with Killer Mike and says he’s also put in work with Cyhi Tha Prynce and more. He says he’s been in studio sessions where he went to get a cup of coffee and saw a guy with an extendo. With Bankroll Fresh’s murder outside of Street Execs studio almost reaching its one-year anniversary and other threats of violence looming in the city, Lecrae says he and his team just want to create a safe space.

“This is a place where there’s no drama, where you can just be creative, be artistic and everybody’s come through,” he says. “… It’s just a place where we say, man, come in, we welcome you here. Check out our environment and its service. It’s loving people, it’s just serving people and showing them a different — a lot of studios in Atlanta, not a lot, but some studios in Atlanta, you gotta walk around with a clip, a gun on your side. You don’t know what’s gonna happen there. That’s not the energy that we have going on.”

One of those people Lecrae has gotten to connect with is Zaytoven. The godfather of Trap has been open about his own faith as he’s crafted the signature sound for Gucci Mane, Migos and countless other Atlanta artists. Lecrae says Zay pulled up to the studio in his Maybach asking for the entrance and everybody turned their heads, but it was a mutual admiration for the two artists to link.

“He was excited,” he says. “It just worked out being in Atlanta and we both love music and obviously he got a church background too, so he was like, ‘Man I just I love us working together in the studio.’ It was great. We got together and just connected, just that raw Atlanta, something you can’t replicate. It’s just a sound people don’t make. People don’t understand, he’s a real musician. He’s a dope producer all around like the whole thing, so yeah I’m excited about it man, we working on stuff.”

Time will only tell if a Zaytoven track makes Lecrae’s next album, which he says is “coming.” Besides “Blessings,” he has a song called “Broke,” which he’s performed a few times, including at Power 106’s “Who’s Next?” where he brought out his longtime friend and collaborator Propaganda.

Being broke made me rich. ? #Lecrae and #Propaganda blessing LA. @lecrae @prophiphop @power_106

He says he has about 100 tracks recorded and now the process is just whittling down what he really wants to present to the world. Lecrae explains he is taking notes from Motown founder Berry Gordy in how to make his decisions.

So get ready for that soul food.