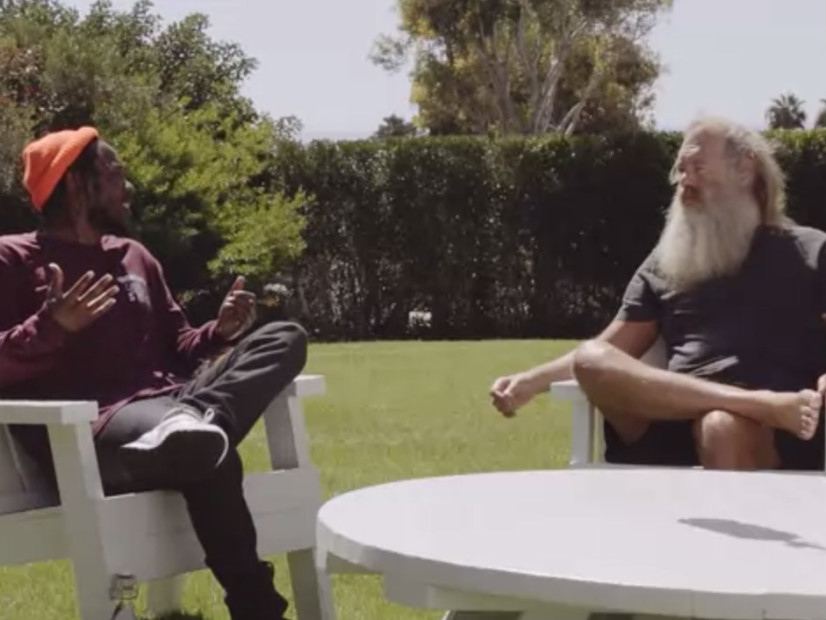 Malibu, CA – Believe it or not, Kendrick Lamar and Rick Rubin had never met until GQ Style brought them together for a conversation at the Def Jam co-founder’s Shangri La studios in Malibu, California.

The two music heads seemed to click effortlessly as they talked about the Compton MC’s creative processes, lyrical influences and the success of To Pimp a Butterfly. After the conversation, they jumped into the studio.

In the 49-minute sitdown, the good kid credits Eminem for his lyricism when Rubin says that Lamar’s emphasis on lyrics seems like a throwback in an era where “so much of hip-hop today is about vibe and swag and personality, and less about words.”

“I got my clarity just studying Eminem when I was a kid,” the 29-year-old rapper says. “How I got in the studio was all just curiosity. I had a love for the music, but it was curiosity. The day I heard The Marshall Mathers LP, I was just like, ‘How does that work? What is he doing? How is he putting his words together like that? What’s the track under that? An ad-lib? What is that?’ And then, ‘Why don’t you go in the studio and see?’ So I do that. Then it became, ‘How’s his words cutting through the beat like that? What is he doing that I’m not doing, now that I’m into it?’ His time is impeccable. When he wants to fall off the beat, it’s impeccable. These are things that, through experience and time, I had to learn.”

King Kendrick has been vocal about his appreciation for the Detroit legend before, calling him a “genius.” Slim Shady gave props to the newcomer in 2014, saying, “He raps to be the best rapper in the world. He competitive-raps. That’s one of the things that’s going to drive his career. He’s going to be around for a long time.”

Eminem just announced his ninth studio album and unleashed the eight-minute saga “Campaign Speech” yesterday (October 19), much to the excitement of the Stans.

Lamar has begun to create his own diehard fanbase, especially with the anthemic “Alright,” which earned him two of his five Grammys at this year’s awards. He reveals to Rubin that he sat on Pharrell’s beat for six months before committing to the message he wanted to convey on the track.

“[B]etween my guy Sam Taylor and Pharrell, they would always be like, ‘Did you do it? When you gonna do it?'” he says. “I knew it was a great record — I just was trying to find the space to approach it. I mean, the beat sounds fun, but there’s something else inside of them chords that Pharrell put down that feels like — it can be more of a statement rather than a tune. So with Pharrell and Sam asking me — Am I gonna rock on it? When I’m gonna rock on it? — it put the pressure on me to challenge myself. To actually think and focus on something that could be a staple in hip-hop. And eventually, I came across it. Eventually, I found the right words. You know, it was a lot going on, and still, to this day, it’s a lot going on. And I wanted to approach it as more uplifting — but aggressive. Not playing the victim, but still having that ‘We strong,’ you know?”

Watch the full interview via GQ Style below.