Anthony “Top Dawg” Tiffith says he wants to release six albums by the end of the year. The TDE exec made the statement while announcing the release date for Lance Skiiiwalker‘s debut album, Introverted Intuition. The newest signee’s project is set to drop Tuesday (October 18). The Chicago singer has released a handful of singles since announcing his deal in May. 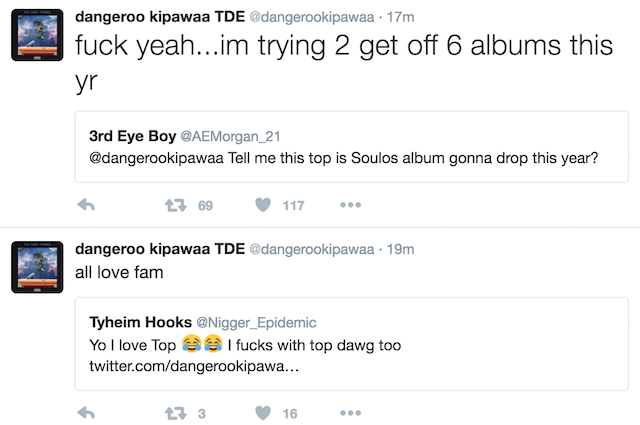 Fans immediately shared their opinion on the news, asking where Ab-Soul’s long-awaited album is and about the status of SZA, who said earlier this month that she “quit,” telling Top Dawg’s business partner Punch that he can release her album “if he ever feels like it.”

The exec attempted to calm the storm by saying Ab-Soul’s project is waiting on the finalized cover art and some videos and that he’s not shelving anybody’s work, including SZA’s.

With ScHoolboy Q and Isaiah Rashad releasing their albums and Kendrick Lamar dropping his untitled, unmastered. project, TDE still has two and a half months to fulfill the promise of six albums.

Top Dawg previously shared a whiteboard with the label’s 2016 release schedule that included all six TDE members and a space for two new signees, one of which turned out to be Skiiiwalker.

Label president Dave Free said at the top of the year that fans could expect projects from ScHoolboy Q, Isaiah Rashad, Ab-Soul and SZA before 2016 was up.