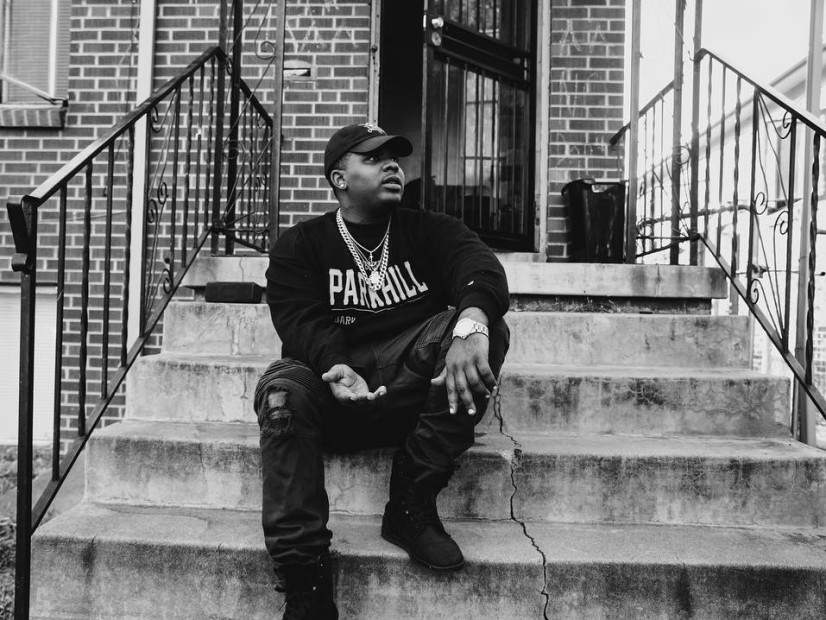 Denver, CO – The Cash Money train is rolling and it stopped in the Rocky Mountains to recruit its latest signee, Trev Rich.

Birdman and the Denver MC met this summer when Rich was putting in some work at the infamous Miami studio The Hit Factory. From there, “it was a blur,” according to the Mile High City’s first major-label signee.

“It wasn’t nothing crazy,” Rich says in an exclusive interview with HipHopDX. “Everything happened naturally, organically. He really took a liking to my music and that’s how we got to the situation that I’m in now.”

When the Cash Money CEO first ran into Trev, he gave him the chance to play two songs. The young MC carefully selected “Score” and “All Mine,” which Birdman seemed to like so much he asked for Rich to keep playing music and had the engineer burn a CD for him of the tracks. The next day, Baby called him in to start working with a Cash Money engineer.

“I was just back and forth from the hotel to the studio,” he says this process went on for about two weeks. “Then he told me that he wanted to do something. We started exchanging numbers and we kept in contact with each other.”

Then Birdman flew the 303 native to New York and Universal Music Group’s headquarters, to get the official deal done.

“I met everybody, and they treated us like family from the beginning,” Rich says. “They presented the contracts that day, that day was when we got our lawyers on, and it probably took about two or three weeks after that time to get the whole deal complete.”

Rich’s best friend since third grade, DJ Squizzy Taylor, was one of the first people Rich’s manager, CoolRay, called when the deal was done. Rich’s emotions were so high he couldn’t even make the phone call himself.

“Trev couldn’t even talk, he was so excited,” Squizzy Taylor says of Rich’s reaction. “They called me and he had CoolRay tell me. He said, ‘It’s a go. We finally did it.’ It was crazy. He was screaming in the background excited.”

Rich took a moment to celebrate with his family and friends in Denver before flying right back to Miami to get grinding on his Cash Money debut album.

Even though he’s bouncing between South Beach and Denver now, he fully knows the excitement that the city feels at the deal. Rich has been one of the Denver scene’s biggest advocates for years and this deal was much bigger than one man.

“Honestly just for upcoming Hip Hop artists to have a major behind you is big,” he says. “It’s something that in my generation, maybe prior to that we’ve never seen before. For [Birdman] to vouch and for him to put his stamp or the Cash Money stamp on Denver, is huge. Back in the city, I’m pretty sure it’s still a big deal and I’m not even there. So it’s like for somebody of his power to take a liking and take the time and effort to say, this is what we about to do for Trev, this is what we about to do for Denver, I feel like that’s not only a win for me and my team, that’s a win for the whole city.”

Squizzy Taylor knows the significance of his friend’s new venture to the city as Denver itself is one of the fastest growing cities in the United States.

“With the weed, with the population tripling or whatever it’s done, just getting way bigger and we finally get to host the big shows,” he says. “The city’s growing, so it’s like we knew something could happen, but to see it happen is unreal. I don’t think no rapper who has really signed to a major record that I know, at least from the hood, from Denver like from the Metro. It’s unreal. He kicked the door down that’s never been kicked down before. It’s crazy. He’s legendary.”

Denver got some shine earlier this year when the Broncos won Super Bowl 50. Rick Ross came to party at the team’s official celebration concert, which featured Squizzy Taylor. T.I. performed at the AFC Championship party that Rich served as a headlining act for. But Rich was putting in work beyond a Broncos co-sign. He hosted the “WAVES” concert in December that brought many of the Denver artists together for the first time.

“What Trev just did for the city is a really, really great thing,” Supreme Ace says of Rich’s Cash Money deal. The Fly District leader considers Trev a mentor and his crew participated in the “WAVES” show with Squizzy Gang. “He’s always paved away for a lot of us out here, but now he just opened a new door, he just changed the Denver music scene big time, ’cause now everyone’s watching all eyes are on Denver. We always knew this would come that someone would break eventually ’cause we all work so hard to put the city on the map. So proud of Trev, he did what no one thought the city could.”

Hip Hop blogger and tastemaker Lizzy Brodie has known Trev since 2011 and says she always knew he was meant for a bigger platform than the Midwest city could offer.

“He went by Rockie and he’s been one of the most consistent and raw talented MCs I’ve heard out of Denver,” she says. “He’s brought the lyrics and the wordplay since day one. It’s no surprise he’s now signed to Cash Money. Everyone knew he would break out beyond Denver.”

Jay Witter, manager for upcoming artist Tony Neek$, can feel the results of Trev’s hard work are already being passed on to the next generation of Denver artists.

“One thing about Trev is that he’s definitely a hard worker and never gave up,” he says. “He’s been in the Denver scene significantly longer than us, meaning that he had to deal with much more adversity in a smaller market. Trev getting that deal is definitely big for the city and everyone is proud of him.”

Ru Johnson, Artist & Repertoire for the Squizzy Gang imprint, works closely with Trev’s entire team and says that she’s enjoyed seeing the crew’s leader really step up to the plate with this new opportunity.

“Trev Rich is an incredible talent and he’s truly stepped up to the plate to represent not only for the city, but for his own legacy,” she says. “Cash Money is the perfect record label for an up-and-coming artist like Trev because he sets his own tone and trends just like the artists who have made Cash Money the legendary label it is. It’s been my pleasure to watch him grow into his own and cover him musically for years. He’s also a close friend of mine and I know he’s going to do incredible things with this music. We were in Miami for a week watching him record, write songs and essentially prove why he’s going to rise through the ranks faster than expected.”

Besides putting Denver on the map, like any rapper growing up in the ’90s, Trev says that signing with Cash Money is a dream come true. The deal feels like everything’s come full circle from him and Squizzy Taylor rocking with Hot Boy$ records back in the day.

“I put Trev on Cash Money,” the DJ says. “It was probably in the fifth grade. I used to love Cash Money. I loved Lil Wayne, The Hot Boy$, all that. I used to listen to that, I wasn’t supposed to but my mom didn’t even know. But I’m listening to that and I’m going to school. That’s probably when we had walkmans or CD players or something and I’m telling Trev like, ‘Man you got to listen to this.’ He would always give me credit because I would always say, ‘Lil Wayne’s the best rapper ever’ just ’cause I felt like it because he was small and I was small, like that’s the guy. So the fact that in my eyes, he really became that, it’s crazy. And Trev is part of that, historical. Cash Money can arguably be one of the best labels ever, with everything they’ve done. So to know that my brother is a part of that, it’s crazy, it’s a blessing.”

Yes, Trev corroborates that story and gives Squizzy Taylor full credit for putting him on to Cash Money in the first place and he reflects on seeing their dream come true.

“My bro DJ Squizzy Taylor he was the biggest Cash Money, Wayne fan for a long time,” he says. “He was like ‘Wayne is going to be so dope, he’s going to be one of the biggest artists ever’ this and that. And this was before Wayne became Wayne. We were all at the house and listening to the Hot Boy$ and we’re taking turns, who’s who, and rapping whose verse. This to happen 20 years down the road is something crazy for us. This is a big thing for us. Honestly, Cash Money is where we wanted to be.”

Lil Wayne and Birdman’s father-son relationship has been strained since Weezy put the boss on blast in December 2014, claiming that he is withholding Tha Carter V from being released. The result has been a long legal saga. It would be understandable for an artist to be fearful of the tensions within Cash Money, but Trev says Birdman is an expert entrepreneur who doesn’t let this situation affect his other business relationships.

“People’s business is they business,” he says. “What Cash Money and Bird and Wayne got going, that’s deeper than something that we can see. That’s deeper than what the media portrays it as. And I know the media has its way of flipping things. I went into this, I took my faith, I took my prayer into this and said this is where I want to be and this is where I ended up. Somebody else’s business is never going to have an effect on my decision. People don’t even know the situation. That’s the situation strictly between Bird and Wayne. So being a Cash Money artist, I keep my nose out of that. I don’t entertain it, I don’t respond to it. It’s really something that they going to figure out, and I have nothing to do with that. All I am is the newest Cash Money artist, that’s pretty much it.”

He has started to build with labelmate Jacquees, whose album he says “sounds crazy right now,” but is focusing on building his own brand within Cash Money and crafting his own debut album.

“I definitely feel like this is fresh,” he says. “It’s a new chapter, it’s a new slate to my career. Going from that to this, I don’t how any artist would not be motivated, not be inspired to do better and stretch and go outside of what you think your box is when it comes to creativity and just try to make the best music possible right now.”

DJ Squizzy Taylor will be holding everything down in Denver and says that even though this is a new chapter, Trev’s work ethic and consistency will carry him to further heights.

“All I know really is it’s just the worked continued,” he says. “We just keep doing what we’ve been doing it’s just gonna be on a way bigger scale now. But nobody works harder than him, he records, with or without this, he’s gonna be recording. All they got him doing is recording, working on it, making hit after hit. When it’s time to hit that button we just gotta be ready.”