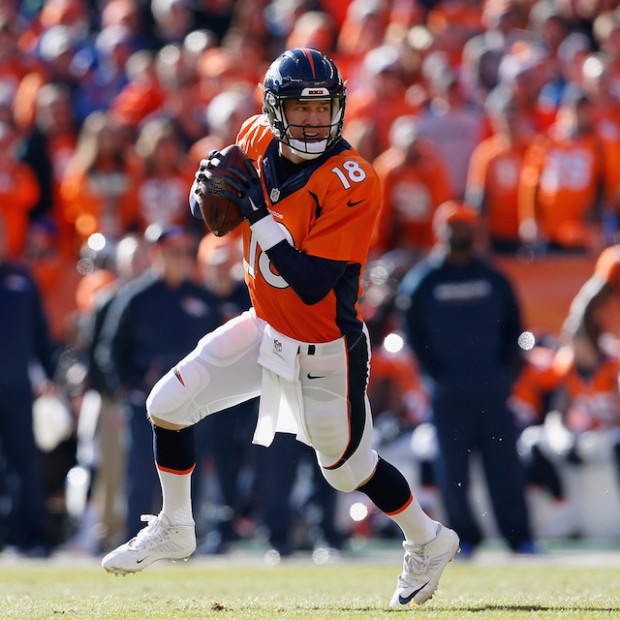 Denver rappers Top Flite Empire, Trev Rich and Supreme Ace are among those cheering the Broncos to the Super Bowl. The population of the state of Colorado has grown by 25 percent since the Denver Broncos won back-to-back Super Bowls at the end of the 1990s.

Nearly 20 years later, the Broncos are headed back to the championship game to face the Carolina Panthers Sunday (February 7) in Super Bowl 50. This is the team’s eighth trip to the Super Bowl, tied for most all-time.

As the state’s population has grown, so has the Denver rap scene. A leader of the city’s movement, Trev Rich is now 26 years old and reflects on what has changed since John Elway and Terrell Davis shook the sports world with back-to-back Super Bowl titles in 1998 and 1999.

“I was a kid when it happened and I didn’t really get to experience it,” Trev Rich says in an exclusive interview with HipHopDX. “Now, I’m older and I get to see the city. I get to see people being prideful and everybody proud. Some of the Broncos is my friends and stuff. I feel great for them because of what we’re doing musically and what we’re doing as a sports team.”

“We” is a common phrase heard when speaking to the Denver rappers about the hometown team. This is evidence of the unifying power that the Broncos have over the city.

“I feel like we’re hungry for it because it might be Peyton Manning’s last year,” Ray Reed says. “He might retire after this year. And the defense are playing like crazy right now. They’re hungry for it. And everyone counted us out. Nobody expected us to be back in the Super Bowl, especially with Manning leading the league in interceptions this year.”

Manning, a future Hall of Fame quarterback, had a poor year by any standards, throwing nine touchdowns and 17 interceptions in 10 games before suffering a foot injury that benched him for the end of the regular season.

Broncos fans old and new are gearing up to cheer on Manning and the Broncos’ stout defense, which led the league allowing only 283.1 yards per game and was the only team to allow opponents less than 200 yards passing during the 2015 NFL season. The Broncos are returning to the Super Bowl after an embarrassing 43-8 loss to the Seattle Seahawks two years ago.

“I don’t think that that will ever be able to happen again,” Top Flite Empire’s Hypnautic says. “So I think that could’ve been a good thing leading up ’til now because it went so bad that time. They have a lot more to prove this time.”

Supreme Ace is a Pittsburgh Steelers fan because his dad grew up in Pittsburgh. Even though the rapper reps black and yellow, he says he does root for the hometown team when they’re not playing the Steelers because he understands the importance of the Broncos to the city.

“It just lifts spirits,” he says of the Broncos’ Super Bowl run. “Everyone’s in a better mood. They just went not too long ago, a couple years ago, but for them to go back and really take that leap again, it’s bringing nothing but good vibes around the city. It’s just a lot of smiles downtown. That’s how I see it. That’s what I see when I go out. It means a lot for the city.”

Forbes has named Denver one of America’s 20 fastest growing cities and the publication put it at the top of its list for 2015’s Best Places for Business and Careers. People are flocking to Denver.

“People come from a lot of different places and they come here for a reason,” King Tef of Top Flite Empire says. “So I think they come to be a part of different situations and the Denver Broncos are a big part of the culture out here.”

Supreme Ace says that many people have yet to understand all that the Mile High City has to offer. He hopes the Broncos’ national platform will help people see Denver is a thriving place besides legal marijuana and pretty mountains.

“The marijuana’s legal, all that kinda stuff,” he says. “Denver’s cool, but something like that, like the Broncos reaching the Super Bowl, people outside of Denver, they think mountains. They don’t understand that we are a actually a growing city that is becoming an elite city up there with the Los Angeleses and the Miamis and the New Yorks. Pretty soon we’ll be there. They’re building so much more here.”

A major look for Denver was when TIP attended the AFC Championship game against the New England Patriots. He then performed with Trev Rich at the Gothic Theatre for the official after party. Trev Rich says that the show was sold out despite it being put together last minute. He explains the significance of people going to shows and investing in local music.

“We on a roll right now,” he says. “Everybody is coming out. Everybody is supporting. People are spending their money. That’s the thing about support. People can say they support, and support and support, but until they’re really spending their money and people are benefiting off of what’s going on, then it’s not support. But the whole city is supporting right now and I can honestly say that.”

Supreme Ace details the importance of having a big-name rapper like T.I. give the Denver scene a co-sign.

“For him to come and attend the game and attend the city after that, those kind of things, it’s awesome,” he says. “It’s really awesome and it really shows, it’s T.I. We have a Hip Hop legend in the city supporting our team and supporting the city and he’s from Atlanta, one of the main cities that has a new artist coming out every three days.”

Ray Reed sees a stark difference between the Rap movement from T.I.’s hometown compared to the Denver scene. Reed grew up listening to Lil Wayne and the Hot Boy$ and when he decided to get serious about his Rap career, he found it difficult to find support.

“It’s so many people are rapping and stuff now,” he says. “You gotta kinda convince people to give your music a shot. It’s like you basically gotta beg ‘em and then once they see that you’re good, then you’re good. Other states like Atlanta, and all these other states, it’s like they push local music, but out here it’s like there’s really no high demand for local music.”

Reed was one of many rappers to release a song dedicated to the Broncos’ championship run. His cut, “Tha Comeback” gives props to many of the players over a bass-heavy beat.

“Ray’s come a long way,” Trev Rich says of his fellow Denver rapper. “He’s part of a new wave of talent that hit the city in the last couple years and he’s honestly one of the better lyricists doing it. We have a close relationship. We talk every day and he’s like a little brother to me. And I’m proud of the success he’s gaining through the city and nationally.”

Reed says he is grateful for Trev Rich’s mentorship. The latter has worked with artists such as Joe Budden and has written for major labels. Reed cites The Wave concert in December, headlined by Trev Rich and hosted by his Squizzy movement, as a significant step towards unifying the Denver scene.

“He’s opening doors for pretty much everybody…” Reed says. “He has some of the best advice. He isn’t one to basically tell you something then tell you something else just so you wouldn’t get through. Obviously he’s, he’ll give you connects unlike other people. There’s people that took off and got further, but they won’t give out any connects. They don’t want you to grow, but he actually wants me to grow. We’ve been in studio sessions 12 hours together. Trev’s my guy.”

One way Trev Rich has garnered success building relationships with the Denver Broncos players. He has found support from Virgil Green since the tight end was drafted out of Nevada in 2011. The rapper also says he has connected with Cody Latimer.

“When I see Virgin Green and I see Cody, they doing their thing on the field, that shit make me proud,” Trev Rich says of his friends.

He says that Demaryius Thomas has been supportive of his music as well. The wide receiver made headlines this year as his mother was granted clemency by President Barack Obama and after having her 20-year prison sentence commuted, she got to witness her son play football for the first time. Trev Rich says that this was “something the whole city was rooting for.”

“Music and sports will forever be intertwined,” the New England Patriots fan says, “but what we need now, though, most importantly is a lot of these Denver athletes because they are the celebrities to use some of their influence to get people who might not know about a lot of these local artists, to find out about them.”

As a former basketball player, Gomez sees many connections between hoops and sports. He has connected Top Flite Empire to Denver Nuggets player Kenneth Faried, but says that opportunities for artists and athletes to connect are getting slimmer.

Top Flite’s Hypnautic has a positive perspective that the success of the Broncos parallels the future of Denver’s Hip Hop scene.

“It’s growing,” he says. “I think after the Broncos win the Super Bowl and there’s a lot of artists even out here in Denver that are starting to take off as well, it’s all just starting to come together.”

Below are the Super Bowl Predictions of several Denver Rap figures: