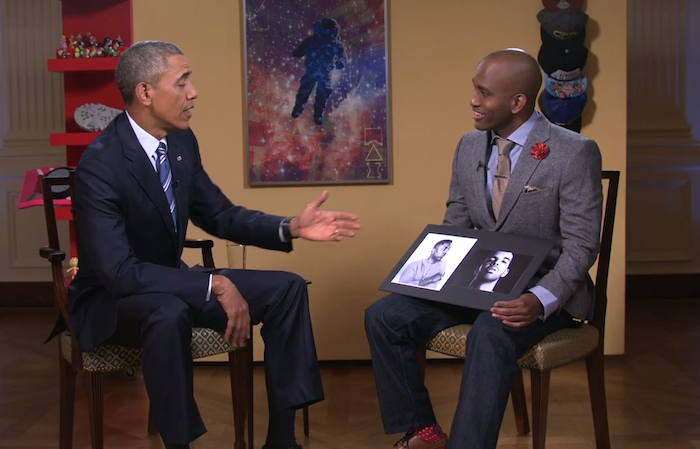 Kendrick Lamar’s budding relationship with President Obama has earned the good kid from Compton a fan for life.

During the White House’s official YouTube Interview with President Obama that livestreamed earlier today (January 15), the commander-in-chief was asked his opinion on the potential winner should Lamar and Drake ever square off in a rap battle and he didn’t hold back.

“You gotta go with Kendrick,” President Obama told YouTube star sWooZie. “I’m just saying. I think Drake is an outstanding entertainer, but Kendrick…his lyrics. His last album [To Pimp A Butterfly] was outstanding. Best album I think [that came out] last year.”

In October 2015, the Grammy nominated rap star paid a visit to the Oval Office as part of the “Pay It Forward” initiative that promoted mentoring youth across the country.

“I sat down with President Barak Obama and shared the same views, topics concerning the inner cities, the problem, the solutions and furthermore embracing the youth,” Lamar said in the widely publicized video. “Both being aware that mentoring saves lives. Sometimes I reflect and think back: Where would I be if I didn’t have the presence of an older acquaintance telling me what’s right and what’s wrong, telling me the pros and cons of every move I was about to make, telling me the best way to plan success for my future?”

Watch President Obama’s rap trivia portion of the YouTube interview’s lightning round starting at the 27:22 mark.