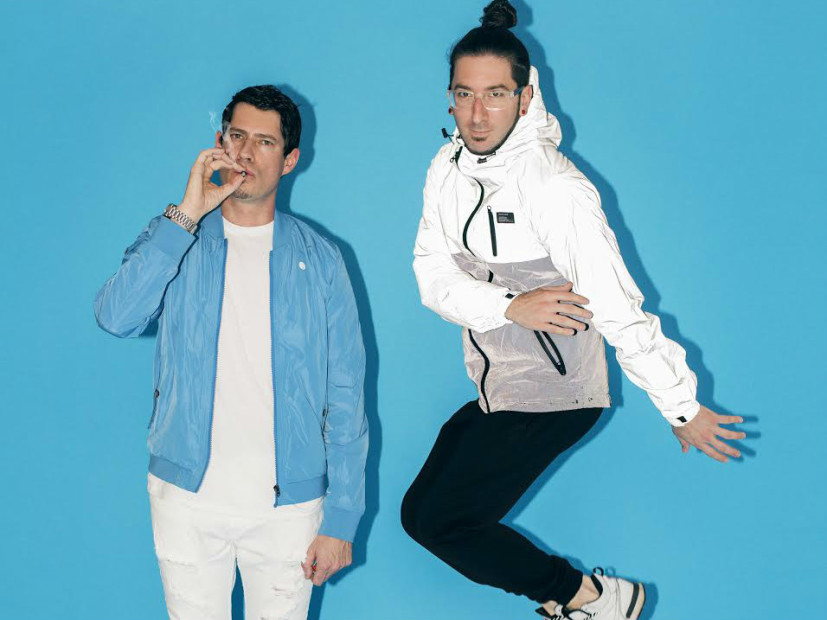 Who Is Big Gigantic & How Did They Get Logic & Waka Flocka Flame's Attention?

Boulder, CO – Big Gigantic’s Brighter Future album is the Boulder, Colorado duo’s fifth LP, but it’s the group’s largest project to date. After years of grinding doing live shows and crafting their unique sound of jazz-infused EDM, Dominic Lalli and Jeremy Salken enlisted some of the most buzzing names in rap for their latest project, including Waka Flocka Flame, Pell and Logic.

“The last four albums have been building up our name little by little,” Lalli, who serves as the producer and saxophonist in the group, tells HipHopDX in a phone interview. “Now we can call up some of these artists. We built up our resources in terms of getting our name out there.”

Rewind to 2009, Lalli and Salken (who provides the drums for all the music) were roommates just trying to make it happen in the local scene. They built their following through a process opposite from most artists, going from live shows that translated into studio work.

“The way we came up, we hadn’t put out any music at all and we were selling out shows,” Lalli explains. “So we had this ground buzz without any music going out because of our live show. Then we put out music. Each record we’ve been trying to develop a studio album sound. I think we’ve finally gotten to a great place developing our sound and getting it to something that we can really put our signature on.”

Lalli credits the Colorado scene’s emphasis on shows for giving Big Gigantic an opportunity to develop the way it did. He also says the market was the perfect size for them to establish their brand.

“If we were in a bigger city, we may have gotten lost in the shuffle,” he says. “It’s kind of the perfect storm for us to be from here and came up the way we did.”

It was from doing these shows that Big Gigantic met Waka Flocka Flame, who appears on the heartfelt “Highly Possible.” The duo was part of Flosstradamus‘ Mad Decent Block Parties with the Brick Squad boss and they felt a natural connection.

“Waka was always a super nice guy and has amazing energy,” Lalli says. “Just a great dude. He had seen us at this festival this summer and was like, ‘Yo, man, we should do something.’ I was like, ‘Yo, actually I got this track right here.’ A couple weeks later he went in and he just did it and recorded his verses.”

The love song is an unexpected departure from Waka’s usual street anthems — a beautiful tribute to his wife as they try to work through their marriage. Lalli says that he knew the beat would be a good match for the Atlanta rapper after hearing him rap over J. Cole’s “Fire Squad.”

Waka expresses mutual admiration for Big Gigantic’s hustle and shares that the record was very personal for him.

“I respect Big G ’cause they have a grassroots following,” he says to HipHopDX. “They haven’t been dependent on radio or mainstream to grow and I feel I’ve done the same in my own lane. This record came right on time and spoke to me personally. I came from a real place in my heart when I recorded it and I hope fans can relate. I’m looking forward to more music to come with them.”

Much love to Waka Flocka for joining us at Lolla! Can't wait to share our new record together! #HighlyPossible

Big Gigantic recruited Pell for “Miss Primetime,” a big band track about an earlier stage of a relationship with a woman.

Once again, both Big Gigantic and Pell felt mutual respect for each other’s talent and passion for the music.

“He’s a super, super talented dude,” Lalli says. “I sent him that beat and he sent me all that back. I was like, ‘What the fuck?’ Like, ‘What … are you kidding me?’ It’s a big testament to him … That guy’s got a super bright future and hopefully we can make some more music together because he’s dope.”

Pell has Lalli playing saxophone on his new album, which will be the follow-up to the critically-acclaimed LIMBO.

“It was great working with not only great musicians, but great people,” the New Orleans rapper says to DX. “I felt like it was easy to make something that gelled because we have a chemistry that allowed it to be fun.”

And Big Gigantic is all about fun. They have created a fan club, that’s really more than a fan club, called the Lil G’s. The “vibe creators” hand out stickers, bracelets, water and other items to help set the scene for a Big Gigantic extravaganza. They will be in action this weekend at Big Gigantic’s fifth annual Rowdytown show at the iconic Red Rocks Amphitheatre in Morrison, Colorado.

We can't believe its about to be FIVE YEARS of Rowdytown!!! See all of you on the Rocks Very Soooooon!!!! ❤️#ABGF Full Vid of ‘DREAM BIG’ at youtube.com/BigGignatic

Big Gigantic Wants To Bring Hope To The World

Besides putting on shows to bring people together, the group is going to give back to each community it visits on its upcoming tour.

“What we do is we get some of these volunteers and/or these Lil G’s and we have a bunch of them come out,” Lalli explains. “We’ll go to a homeless shelter and feed the homeless people for three or four hours. We’ll go gather all these toys or clothes for kids and set up these packages. We’re doing this on tour. Then we’re also donating $1 per ticket to this Brighter Future fund where we can keep adding to this idea and really keep helping people in our community and communities around where we tour. Spread the love and try to give back.”

The bandmates know what it’s like to be living on a dollar and a dream and are using the Brighter Future platform to give hope to people where, in today’s world, there’s a lot of darkness.

“We didn’t have money,” Lalli says. “We didn’t have anything. Jeremy was working at Domino’s. I was working at a coffee shop. We were just grinding and trying to make something happen. We always said that if we ever made it to any degree, let’s try to help give back because we’ve been there before. We try to extend our hand because we have that leverage now to do that. It’s important for us and I think this album and the music, the timing with everything that’s going on domestically and all the shit in the world, I just feel like things are worse than they’ve been in a long time. Maybe this is just a little reminder every day through the music or message to make people think twice about their actions or maybe how they can help instead of going online and bashing somebody. Maybe holding off on that because, what’s the point?”

Buy Brighter Future on iTunes or stream at Spotify.