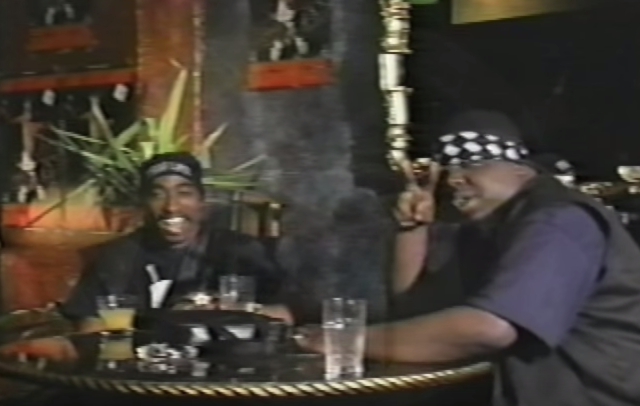 Los Angeles, CA – Shortly before his death, Tupac Shakur was on the verge of creating a genre-shifting record, according to veteran actor Bokeem Woodbine.

The Emmy-nominated thespian, who also starred in ‘Pac’s “I Ain’t Mad at Cha” music video, says the late rapper shared the details of the record while they were on set filming of the All Eyez on Me single.

He explained that the record, which Tupac informed him to keep secret, would have featured the Notorious B.I.G., Mobb Deep, and other East Coasters, and may have put an end to their beef.

“He had a plan to put everybody together on one record and just squash the beef,” Woodbine said in a new interview with The Fader. “He wanted to take the power away from the labels that were exploiting the situation. It angered him that they were profiting; he wanted to stop the cash flow. It wasn’t something I was supposed to tell people about, you know what I’m saying? I honored that, and I just waited for that record to come out. But unfortunately, as you know, it never did.”

News of the mega-record comes years after Lil Cease revealed that Tupac and Biggie would have settled their differences with one another if they had the opportunity to do so. The 1996 rivalry spawned below-the-belt (and fan favorite) records such as “Hit ‘Em Up” and “Drop a Gem on ‘Em” but Biggie’s former hypeman believes all that would have been forgiven.

“I think if him and B.I.G. would’ve saw each other and chopped it up after that Source Awards shit, the situation would’ve been different,” Lil Cease said, during an interview with ThisIs50 in 2012. “We saw him on numerous occasions, and nothing happened. We had little words, but nothing happened. He knew B.I.G. I just think the wrong people got in his ear; the wrong people were feeding him shit. And he ran with it. At the end of the day, I think it was all love between them. I think it was just the two…niggas had batteries in their backs, and it pushed them in the wrong direction.”

In addition to sharing the details of the record Tupac had up his sleeve, Bokeem Woodbine also discussed working with Forest Whitaker, possibly winning an Emmy for his role as Mike Milligan in FX’s Fargo series, and more, during his interview with The Fader.

Relive the “I Ain’t Mad at Cha” video down below.