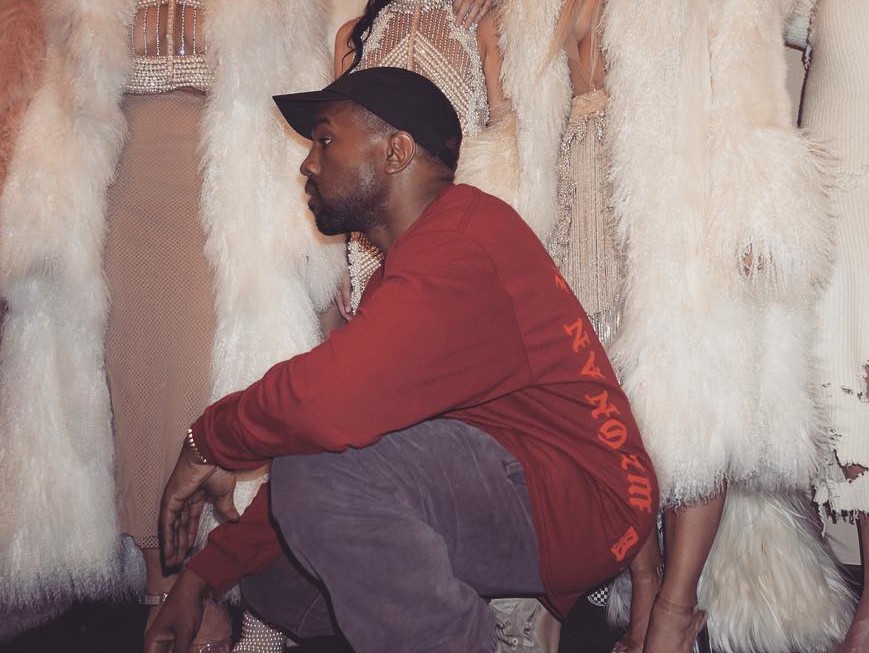 Los Angeles, Ca – As Scooter Braun scanned the long line at the Los Angeles location of Kanye West‘s Pablo pop-up store, one of 21 stores across the globe, he stopped and gave his phone to one lucky fan who got a chance encounter to speak with Yeezus himself.

That person was 20-year-old aspiring fashion designer Cesar Martinez from Compton, California who just so happened to find himself at the right place at the right time. It was an almost serendipitous moment for the Kanye fan who knew that one day, he and Ye would meet and discuss a topic that they both love: fashion.

Kanye apparently saw the fan on live TV and specifically asked Scooter to hand the phone to him, Cesar explained to HipHopDX. Just seconds before their very brief, yet productive conversation, a reporter from Complex had asked him: What would he say to Kanye if he was right in front of you?

Once given the unbelievable opportunity to talk to the man that inspires him to create, he took no hesitation in letting The Life of Pablo rapper know that he wanted to talk business and Kanye agreed.

“It’s Kanye so you know you have to gas him up, you got to give him props,” Cesar says in an exclusive phone conversation. “I didn’t want to get straight into it. I told him thank you because you’re the one who inspires everybody. I told him that he’s the reason all these people are out here because, the people that hate him, hate him because they don’t understand what he stands for. They don’t understand creativity. They’re not artists, they’re people who just do day-to-day stuff and just look at Kanye like a celebrity to them. To artists and the people he inspires he’s much more than that. Yeah, he can be an egomaniac or go crazy, but at the end of the day his work speaks for itself.”

In true Yeezy fashion, the Chicago rapper went on a mini rant about Cesar communicating the exact things he’s been trying to say in interviews that have gotten him ridiculed over the years.

“‘Thats what I was tryna say,'” Cesar says the rapper told him in his best Kanye voice. “‘That’s what I’ve been tryna tell these people! That’s what it’s all about!'”

After buttering the “Ultralight Beam” rapper up, Cesar took his chance and let him know that he’s someone who he should be working with. If not, within the next five years Yeezy will have no choice but to notice him, the young designer told him.

“He was like, ‘Nah, let’s do it now, I’m going to get in contact,'” Cesar recalls before West gifted him with two tickets to watch him perform on his Saint Pablo Tour.

So far, Yeezy’s camp has kept their word and made a promise that he should be meeting with Kanye soon.

“They reached out to me today (August 21) actually,” Cesar reveals. “They let me know that he’s been busy but they’ll contact me within the week so we’re waiting for that. I was actually supposed to meet up with him that same day. I can’t discuss the reasons because it has to do with music.”

The once homeless creative has hopes and desires beyond designing clothes. He has plans on launching an online magazine with a few of his close friends called “Section 90s” and his very religious parents are extremely happy that their son is that much closer to his dreams.

For over three years he’d been building upon a new collection he calls Exodus, inspired by the Holy Book’s verse at 35:31 which reads: “and he has filled him with the Spirit of God, with wisdom, with understanding, with knowledge and with all kinds of skills.”

Cesar says he hopes his collection allows for people to know that you don’t have to go to church to experience God. To Cesar, his collection is an example of his testimony from God and each piece from the Exodus collection is set to have its own biblical verse and meaning.

“That’s the number one thing I want to show him because I know he would definitely like it,” he says. “Not just the brand, but it’s actually something good I am trying to do. I’m just trying to inspire like he is.”

After over three years of adding and subtracting from his Exodus collection, much like Kanye did with TLOP, which was revised a total of twelve times, the biblical perfect number, Cesar now feels like this is the perfect time to release his holy Exodus collection upon the world.

Peep a preview of what’s to come from Cesar The Designer below.