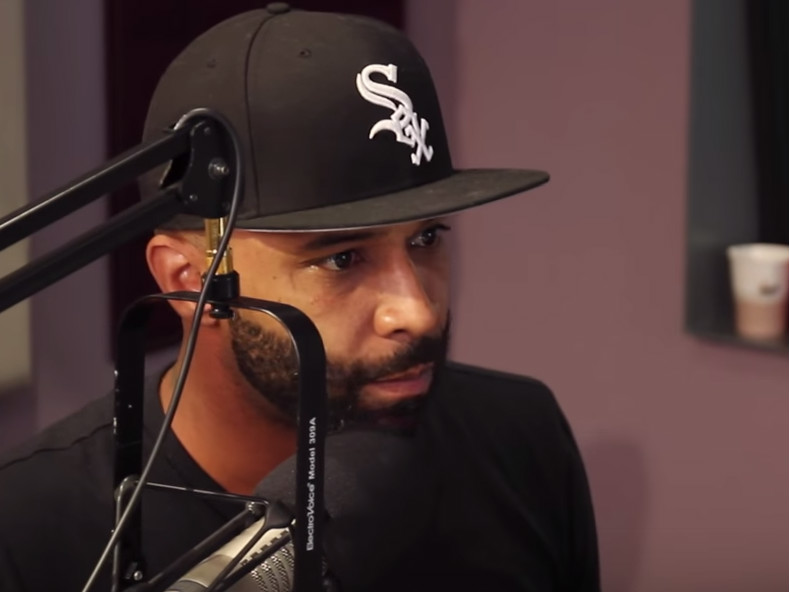 Joe Budden is still not impressed by Drake’s bars and says that the “Hotline Bling” rapper and other mainstream artists like him are more concerned with their image than their music.

“I feel like a lot of these, him, Nicki [Minaj], a lot of them, Meek [Mill], they all piece of shits,” he says on The Brilliant Idiots podcast. “They just hide behind their celebrity.”

The Slaughterhouse rapper has dissed all three on his podcast. Most recently, he questioned Drizzy’s VIEWS album, saying he sounds “uninspired.”

Budden has released three diss tracks toward Drake. His latest attack, “Afraid,” came after the Toronto rapper finally responded on wax with a verse on French Montana’s “No Shopping.” (French later said that the verse wasn’t intended for Budden, although that hasn’t really changed the narrative much).

Budden says he knew Drake’s disses were coming long before the full release of “No Shopping” over the weekend. Like most people, he was tipped off to the bars when a clip surfaced of Drake rapping “pump, pump it up” — the same lyrics of a 2003 song by the Slaughterhouse rapper.

“Maybe I’m about to get some pub money,” Budden joked. “They flip songs all the time, French. Maybe they’ll flip ‘Pump It Up’ and that’s it.”

Well, Budden says because the industry is so small, word got around about the content of the full song.

“I’m hurt. I am hurt,” he says of his initial response to the full “No Shopping” verse. “I’m appalled that that nigga who know my pen game. He know I don’t play. He know I don’t care about none of that fame, success, attention, none of that, he know what I do, and you want to use your celebrity to do that to me? We smoked hookah together. How could you do that?”

Clocking in at more than six minutes, Budden’s “Making A Murderer” is packed with jabs hitting on all aspect’s of Drake’s career.

“I’m aware of the length, people told me to cut it down,” he says. “I was only ever concerned with how he was affected, him. I don’t care about what the public thought. I don’t care about, when I put those hundred-something bars down. It’s bars in there, it’s only for him. It’s so much cold you can’t even understand what’s going on there. I would like to think if I’m guessing, it gave him some pause.”

He explains the timeline of how the song was created and how he was playing a game of cat and mouse for its release.

“So that French record, they did that clip in May, we immediately went to the studio and spent the night there,” he says. “We thought [Drake’s full diss] was coming. Now I’m trying to guess. Alright, they had the Bad Boy shit at Barclays. Then Memorial Day Weekend, Drake was having a party. All that shit, it never came. I said, ‘Woah,’ then the ‘4 p.m.’ shit, I think Drake was dissing Puff, then I’m like, ‘Wait,’ I’m real confused now.”

Even though Drake’s “4 p.m. in Calabasas” wasn’t direct shots at Budden, he says he could read past the subliminals. He explains that the artform of rap is a language that the public doesn’t fully understand. That knowledge also helps explain his plan of attack.

“He does that often to people,” he says. “I’m such a big fan I just know and I’m a rapper so I know when it’s happening. You’re not going to do that to me because when you do that and because I’m so insignificant in comparison to him, nobody will ever know. So it’s really just me knowing. It was my job to call it all out. I knew the media would say I’m crazy. I have to call it out because later on, y’all will get it. It’s not my fault that the business side of things is making him take so long with that record. Me, I’ve never really had the best business. I’m on your ass. So I put that out, smoke screen a hundred bars, clear signal to the rappers. Ok, here we go again. Here’s another one. Four days, five days later. I’m still here, nigga. I’m not leaving this one. Oh, you left it alone? I’m back again. I’m gonna be on his ass and he won’t do it again. You won’t hear another word out that boy’s mouth about Joe.”

Meek Mill and others have questioned why the New York rapper keeps persevering at the battle, saying that the 35-year-old is irrelevant — a claim that he vehemently denies.

“It ain’t ’cause I’m irrelevant,” he says. “Y’all can paint that picture. Y’all can keep painting that fucking picture.”