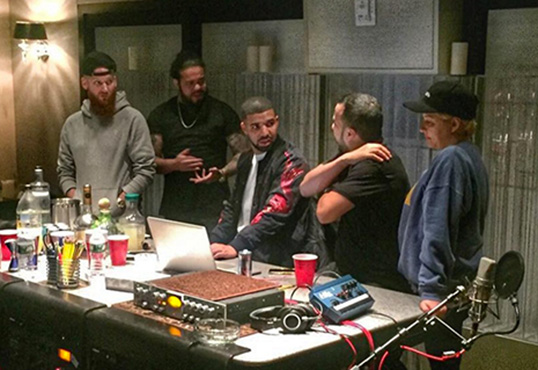 Is Drake About To Clap Back At Joe Budden?

Drake may be gearing up for a new rap beef, this time with outspoken VIEWS critic Joe Budden.

In a short clip from Snapchat that’s been making the rounds on Twitter, French Montana previewed a few seconds of a new collab with the Toronto superstar. Just before the clip ends, Drake raps the words “pump, pump it up,” the lyrics to Budden’s 2003 hit of the same name.

French Montana got him the Drake stimulus package. Oh and drake might. Keyword might. Be ending Joe Budden career pic.twitter.com/vMwZNDlaAk

The clip set off speculation that Drake’s verse would address Budden’s recent negative comments about him and his new album. Budden accused Drizzy of sounding “uninspired” on the chart-topper in a rant on his podcast earlier this month.

“I think that that kid on that album that I heard sounds real fuckin’ uninspired,” he shouted on his “I’ll Name This Podcast Later” show. “That music sounds good and I enjoy it. I played that album all the way to D.C. and all the way back multiple times. 40 you sound amazing. 40 continues to progress. Drake you do not. I said the other day on this podcast I miss the Drake that starts the waves, not hops on other waves and I’ll say it again: I miss the Drake that pushes the fuckin’ agenda, not lets the agenda push him.”

Budden isn’t the only one who feels that Drizzy skated through his latest work. HipHopDX’s review gave the album 2.9 out of 5, calling it an “elongated crawl through the desolate psyche of a man whose previously endearing introspection has been eclipsed by self-absorption,” while review aggregator Metacritic has settled on a score of 68 based on 29 reviews that ranged from positive to mixed, and Any Decent Music’s algorithm is currently giving the album a 6.6.

Budden posted some clips to Instagram of his friends talking about French Montana’s video, who seem convinced there’s a verse about Budden coming.

Budden also commented on Twitter, where it seems he’s waiting to hear the whole verse before passing judgment.

Cuz i gave my opinion on my podcast… Cold world lol. https://t.co/UX64jQYR3Q