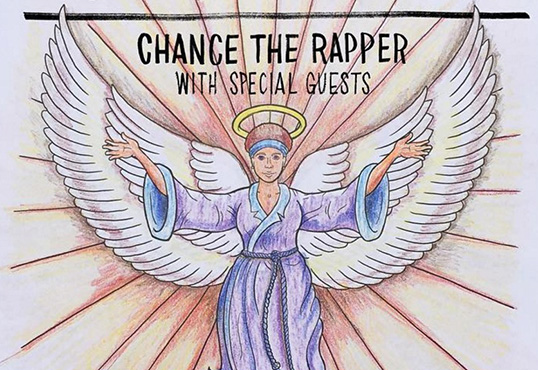 Chance The Rapper has released the European dates for the “Magnificent Coloring World Tour,” officially making the trip international.

The Chicago rapper announces six dates across the continent including shows in Denmark, Germany, the United Kingdom and France.

See the “Magnificent Coloring World Tour” European dates below and scroll for the North American dates:

Chance The Rapper is bringing his Coloring Book mixtape to the world through his “Magnificent Coloring World Tour.” So far, only North American dates have been announced, but the 23-year-old tweeted that European details will be coming this week.

In a Reddit Q&A from May, he told a fan he’d be in Australia “soon,” though he hasn’t confirmed anything since Tuesday’s announcement.

The tour will take him to most major cities around the country between September 15 and October 21, although his hometown concert is still TBD, according to the flyer he posted to Instagram.

The tour announcement also promises that unspecified “special guests” will be joining in. There’s no telling who’s involved yet, but seeing that Chance is a critical darling who works with Kanye West and hangs out with Jay Z and Beyoncé, there’s a good chance that the guests will definitely be special.

He’ll be hitting the festival circuit in the next few months too, playing at the Jay Z-curated Made In America festival in Philadelphia over Labor Day weekend before hitting the road on his solo tour.

Chance will also be participating in the inaugural edition of the just-announced The Meadows music festival, going down in Queens, New York on Oct. 1-2. The stacked line-up is put together by the organizers of the Governors Ball Music Festival.

Check out the shows that have been announced below, and get pre-sale tickets through Chance’s website. VIP upgrades and general sales start on Saturday.