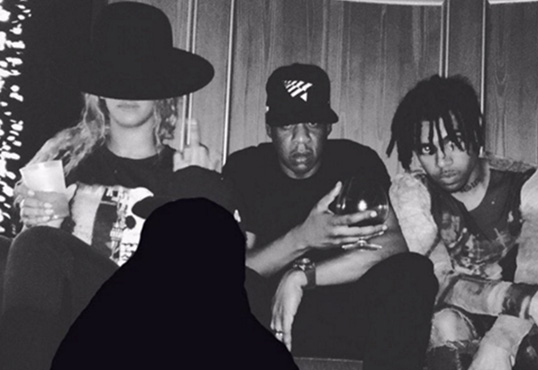 Vic Mensa and Chance The Rapper have a lot in common. They’re both 23-year-old rising star rappers out of Chicago who have worked with some of the biggest names in Hip Hop, including Kanye West. They’ve known each other since high school, have worked on a few songs together, and are both part of the same Savemoney collective.

But now it seems like there might be differences growing between them, at least according to a poorly edited photo uploaded to Mensa’s Instagram on Thursday (June 9).

See if you can spot the difference.

If you noticed that a giant black blob is obscuring Chance The Rapper in the second photo, then congratulations, you’ve got eyes.

The edited IG version of the image (captioned “Birthday with friends. Jordan year.”) is deleted now, but it left fans wondering what’s going on between the two rappers.

Vic Mensa and chance are beefing now? For what?

@KiddKalra why chance and Vic beefing tho

Chance and Vic lowkey going to sneak diss till they are like 50.

Neither rapper has publicly addressed the issue yet, though Vic may have dropped a subliminal on his timeline earlier this week.

niggas who only wanna kick it for the photo op pic.twitter.com/LOV4H2Nf3f

Meanwhile, Chance continues to post photos of himself with Hip Hop’s reigning couple.

Coolest thing I did yesterday

My auntie Yonce and Unc tryna fix me up. Pickin on me ?? pic.twitter.com/1BLPijIrYT