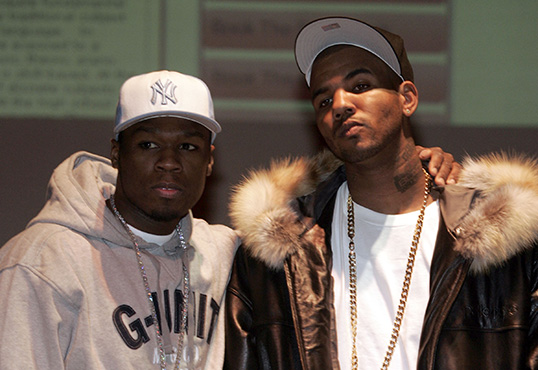 50 Cent & The Game Reunion Did Not Happen, But There Is No Beef

Hip hop media went crazy yesterday speculating wildly about a possible reunion between 50 Cent and The Game — a reunion that would mark the end of a more-than-10-year feud between the former G-Unit crewmates.

That beef started after 50 dropped Game from G-Unit over what he perceived as disloyalty for not backing 50 in his disputes with other rappers. The argument led to some high-profile diss tracks and boiled over with a shootout outside of Hot 97 in 2005.

The most recent rumors of reconciliation sprung from a photo posted to Instagram from Game’s artist King Pharaoh Jackson, who tagged a picture of himself and the rapper at a Hollywood Hills party house.

Real Ni**a service announcement 2 all the haters out there… PUT SOME RESPECT ON MY NAME (Birdman VOICE)… @losangelesconfidential is my brother first and my business partner second… We family… You got a problem with him… You got a problem with ME… #KINGPHARAOH….. Those who really KNOW ME, KNOW THAT I AM A REAL ONE, A REAL KING… Either I'm coming to BLESS YOU OR TO DISCIPLINE YOU (take that anyway you want it… I'm Known to handle business by any means necessary #chuuch)…I'm the protector of my fam… I execute efficiently in everything I do… MY SHOWBIZ FAMILY – #BLOODMONEY #RUNTELDAT #FASTLYFE #TMT #25THDYNASTY #BLAQDIAMOND #WINNERSCIRCLE I fight sweat bleed work work work win win win and IM ALWAYS VICTORIOUS THROUGH CHRIST WHO STRENGTHENS ME. TRY ME IF YOU WANT 2…. LETS GO … I'M ALL THE WAY UP NOW…NOTHING CAN STOP ME !!!!!! #chuuch#kingpharaohsprelude#realtalk#facts

The same night, DJ Drama posted some behind-the-scenes photos of a video shoot, including a shot of 50, tagged to the same location.

Many outlets ran with the news that 50 and Game had been in the building together.

HipHopDX reached out to Pharaoh (who appeared alongside Rick Ross, 2 Chainz, Diddy and more on Game’s Michael Brown tribute song, “Don’t Shoot“) to get the details first-hand. He said over the phone from Los Angeles that the photo was a late post from a Cinco de Mayo party he’d been at with his Blood Money label boss and tour-mate.

So there you have it. Both rappers were in the same place…just not at the same time.

News of a thawing in the relationship between 50 and Game popped up in March when the two were both seen partying with their entourages at Hollywood hotspot Playhouse.

Pharaoh was there that night too, and recounted the night for HipHopDX.

He says that one of the club’s owners was initially worried about having both rappers under the same roof but that Game’s manager Wack 100 spoke with 50 and assured everyone that things would stay smooth.

Pharaoh explained that both camps just enjoyed themselves and that the energy was all positive. “50 Cent was already in the club with his people, and we went in there with me, Game [and a bunch of other people] and about 50 broads and we bought a bunch of [50’s Vodka brand] EFFEN bottles. We showed love. We didn’t just go in there and buy Rosé and a bunch of Cîroc like we usually do.”

Speaking of the long-standing beef, he said, “I’m not gonna say how deep it goes, but it goes deep. Whatever happened, it was years ago. And you gotta remember everyone was in a different space. When it was a war it was a real war, then after the war, there was still things going down and it was a cold war. Everything wasn’t above ground but stuff was still happening.”

Pharaoh says that before that night, the rappers hadn’t been in the same place for 10 years, but that in that time, they both grew, both as men and as businessmen. “You gotta look at both of ’em, they was both poppin’ in they 20s, killing it … There was a lotta other figures involved in how all that beef popped off, [but] only them two can tell you the center of the beef, but it was 10 years ago. Fif’ got children, Game got children … He’s about his community … He’s a solid individual. He’s matured.”

Game settled things with another G-Unit member, Lloyd Banks, when the two posed together for a photo in Dubai in February. At that point, 50 didn’t seem ready to bury the hatchet yet, commenting that “shit don’t get old with [him].”

He also stated that he’d “never work with Game” in an interview with Complex in 2014.

Still, Pharaoh thinks that the time for reconciliation has come. “Watch what happen with 50 and Game,” he said. “I’m so happy for what’s gettin’ ready to happen in the Hip Hop movement. For them two to come together, this is equivalent to what woulda happened if ‘Pac and Biggie never died. They get to do now what ‘Pac and Biggie never got a chance to do. Ain’t that something? As big as ‘Pac and Big were, they never got a chance to come together and make peace.”

The whole story definitely has the makings of a Hollywood movie — and with another post on IG, Pharaoh set off more speculation that a G-Unit biopic could be in the works.

In the caption of a clip showing Game rapping to Dre about the group’s split, Pharaoh wrote: “The BEATLES AKA ‘G-UNIT’ are joining forces again… ‘STRAIGHT OUTTA COMPTON’ the movie captivated the Globe…. NOW what’s gone happen when we do the ‘G-UNIT’ movie with all the drama… G-UNIT aka the Hip-Hop Beatles TOOK OVER THE WORLD, BUT EGOS CAUSED THEM TO BREAK UP PREMATURELY….”

Documentary 2 & 2.5 go download it on iTunes now…. @jellyrollville and my bro @losangelesconfidential killed it with this track…. The BEATLES AKA "G-UNIT" are joining forces again… "STRAIGHT OUTTA COMPTON" the movie captivated the Globe…. NOW what's gone happen when we do the "G-UNIT" movie with all the drama… G-UNIT aka the Hip-Hop Beatles TOOK OVER THE WORLD, BUT EGOS CAUSED THEM TO BREAK UP PREMATURELY…. #gunite#winnerscircle#bloodmoney#gunit#thegame#50cent#youngbuck#lloydbanks#tonyyayo#kiddkid#kingpharaoh#skemetheduke#wack100#gmajic#nujerzeydevil#john316official

HipHopDX asked Pharoah for more details on the project.

“That movie is, I’m not gonna say 100%, but if I was a betting a man in Vegas, 99.9999% that joint gonna come down,” he said. “No one thought Straight Outta Compton was gonna do what it did. Nobody. I don’t think even Cube and them could’ve forecast that … Now that you see that, you’re gonna see a bunch of Hip Hop biopics comin’ out.”

He added that a movie of the G-Unit story would obviously take a lot of work logistically, but that he’s been approached by people interested in making it happen.