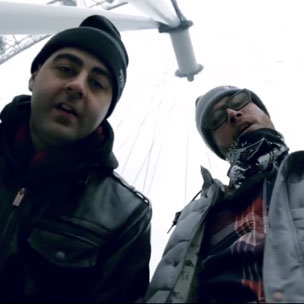 The project is made up of eight tracks and includes features from Akie Bermiss, Dice Raw and Denitia.

The cover art is made by Marvel Comics illustrator Chris B. Murray.

The stream for The Fuel is below:

(This article was first published on September 24, 2015 and is as follows.)

New York emcees Koncept and J57’s long-awaited EP, The Fuel, will be released on November 20, 2015. The eight track offering features sample-free original production by J57 as well as appearances by Hollis, Akie Bermiss, Dice Raw, Denitia, among others.

Koncept and J57 initially built their reputations as members of the Brown Bag Allstars, a collective that also includes Soul Khan, Audible Doctor, DeeJay Element, E Holla and DJ Goo. The two have since released several projects including Koncept’s critically praised Awaken. Most recently, J57 produced “The Purple Tape” off of Method Man’s The Meth Lab, which also features Raekwon and Inspectah Deck.

The Fuel will be released through KON57 Records which is distributed by Soulspazm. iTunes pre-order is now available.