Tyler, the Creator On "EarlWolf" Album: "I Don't Want To Do It Anymore" Answering a question from a fan on his spring.me account, Odd Future cofounder Tyler, the Creator described wanting to scrap his planned joint album with Earl Sweatshirt.

Asked about a Twitter post in which he shared that a full-length EarlWolf album was unlikely to be released, Tyler confirmed the news and explained his loss of interest in the project. “I’m serious,” he wrote. “I don’t want to do it anymore and to be honest it will never live up to the expectations of people that really want it. Not that that really matters, but I’m not in the mindframe to do a whole album of that shit.

“I don’t want to do it,” he continued. “Maybe one day when I don’t want to make clothing and furniture and gay ass fruity music about lakes and shit, I’ll get back around to hard hitting raps, but the way things are looking, it’s only gonna get worse until I turn full fag.” Tyler’s full statement is available below. 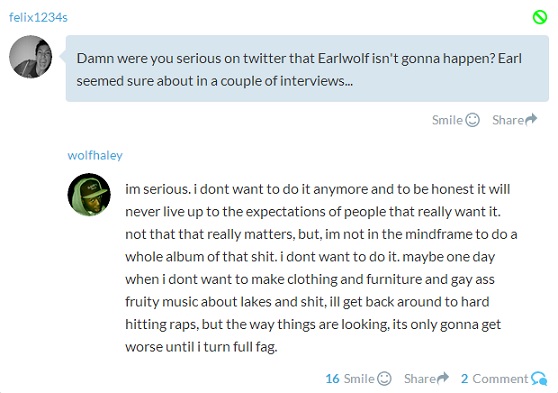 Last year, shortly after releasing Doris, Earl Sweatshirt told NME that the collaboration was incomplete but still planned. “We’ll do the record when we’re ready to sit down for a month and a half and do it in one,” he said. “It’d be shitty if it was spread out. That’s how I want to do shit from now on; that’s what I learned from doing Doris. Trying to piece shit together that’s hella spread out kinda sucks. You hit a lot more walls trying to make it sync.”

Earlier this month, Tyler, the Creator was arrested for allegedly inciting a riot at a SXSW festival performance. The rapper was released shortly after on a $25,000 bond on March 15.

RELATED: Tyler, the Creator Arrested For Inciting A Riot