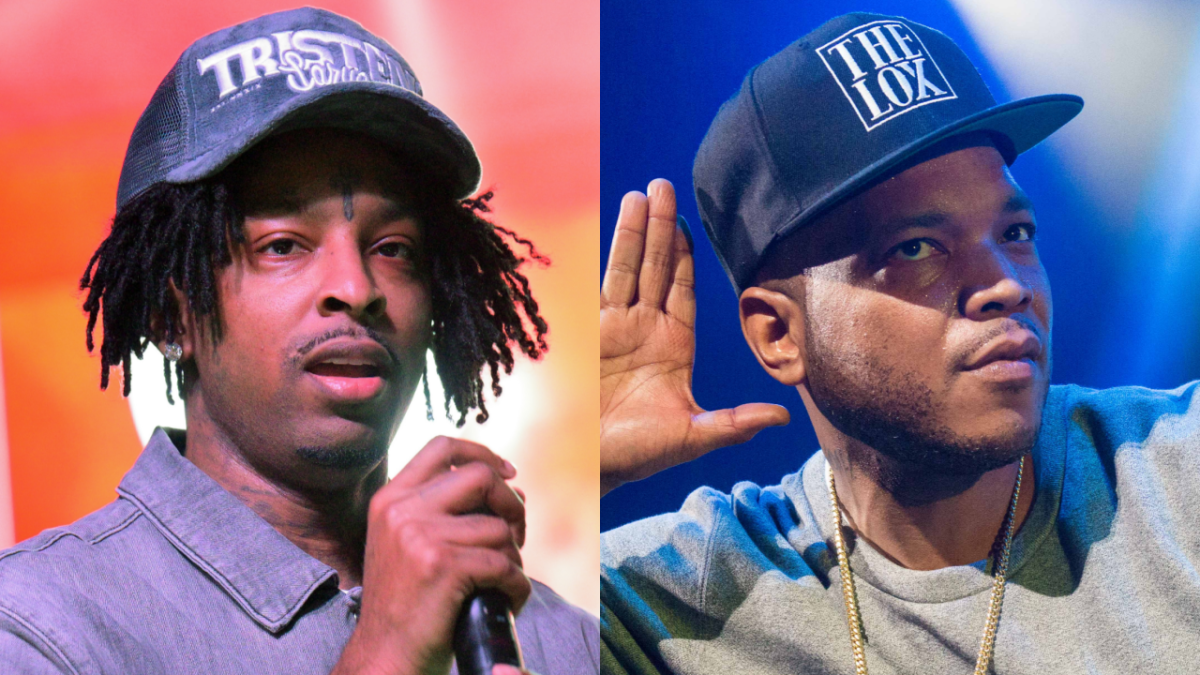 21 Savage doesn’t deserve to be called a “lyricist,” according to Styles P.

The LOX rapper appeared on the latest episode of Math Hoffa’s My Expert Opinion earlier this week, where 21’s recent comments about Nas’ supposed lack of relevancy cropped up in conversation.

Still seething over his assertion that the Queensbridge MC isn’t relevant in today’s Hip Hop landscape despite his prolific, Grammy-winning output in recent years, Styles put the Slaughter Gang hitmaker’s own career under the microscope and argued he isn’t worthy of the “lyricist” title, even though he’s entertaining on the mic.

Ghost went on to say he believes Drake — who 21 Savage recently dropped the joint album Her Loss with — should’ve checked the Atlanta native over his comments about Nas.

“Drake’s supposed to tell this n-gga, ‘Chill. That’s Nasir Jones,'” he continued. “My n-gga, you are talented, you are dope, you are fucking fly, your flavor, you mean a lot to the culture, you are important.

“[But] you ain’t one of them. You ain’t a three-point shooter from deep. Nas is. Drake’s supposed to say, ‘I am. Kendrick is. Cole is. You are not. Leave him alone, that is our OG.'”

Styles P conceded that 21 Savage most likely doesn’t “give a fuck” about what he has to say, and speculated his controversial remarks were spurred by “cameras” and “money” influencing people to say things they wouldn’t otherwise say to a person’s face.

The Yonkers native also admitted that he himself doesn’t hold all of his Hip Hop forefathers in high regard, but wouldn’t publicly disrespect them in the way that he believes 21 did toward Nas.

“There’s a lot of legends I think suck, lyrically,” he added. “If you older than me, my peer or younger than me, there’s some of y’all n-ggas that I will run circles around. You don’t even deserve to be next to me.

“But if you earned your keep, guess what? I’ma step right here. Who the fuck am I egoistically to step on that?”

21 Savage’s contentious comments came during a Clubhouse call in November, shortly after the release of Nas’ King’s Disease 3 album with Hit-Boy.

“I don’t feel like he’s relevant,” he said during a discussion about veteran rappers. “He’s not relevant. He just has a loyal fanbase and he still makes good-ass music. But relevant? Nah.”

The Savage Mode rapper later clarified his comments on Twitter, writing: “I would never disrespect nas or any legend who paved the way for me y’all be tryna take stuff and run with it.”

But that didn’t stop the flood of criticism, with Hit-Boy, Kodak Black, Fivio Foreign and others slamming 21 Savage for his remarks. Actor/director Michael Rapaport, a fiercely outspoken champion of Golden Age Hip Hop, labeled 21 a “Cat in the Hat rapper.”

Nas, on the other hand, saw the controversy as an opportunity to bridge Hip Hop’s generational divide by joining forces with 21 Savage on the song “One Mic, One Gun,” which dropped by surprise on November 29.

The two had actually been planning a collaboration before the backlash. “Way before all that other shit happened, we been figuring out how we was gonna do a song before this,” 21 revealed during a Clubhouse call following the song’s release.

“He been telling me he was a fan of my shit. I been telling him the same thing before all this shit happened. That’s why he didn’t take what I said in no disrespectful way, ’cause he knew what I was trying to say. I’m not even that type of n-gga.”