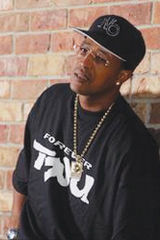 There’s one in every family. In some of the hardest albums No Limit Records ever released, C-Murder was often the culprit. He was and is the Backwoods-smoking younger brother of Master P and older brother of Silkk Tha Shocker, as C (short for Corey) somehow seemed the most convincing of the Brothers Miller when it came to rhyming about murder, malice or money-getting schemes.

Time proved to be prophetic. In early 2002, C-Murder was convicted of second-degree murder for a shooting in a Louisiana club. Now released to house arrest with his grandmother, the foulest mouth of Tru is now using some different words and topics to reflect on life. In a discussion with HipHopDX about literature, hustling and Soulja Slim, C-Murder has all the side-effects of a reformed man. But for those curious to see or hear what’s really going on in Corey Miller‘s world, he’s still hustling – DVDs and CDs for your taking.