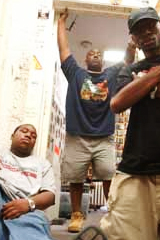 North Carolina has never had it this good. In a few short years, Little Brother have not only managed to create a movement, but have given hip-hop lovers a reason to keep listening. Their debut album, The Listening, released in 2002, came almost out of nowhere and drew more comparisons than you can shake a stick at. So it was no surprise when the likes of ?uestlove and Pete Rock started singing their praise. Without preaching or taking themselves too seriously, LB have managed to give their audience something to think about while keeping them entertained. No bells and whistles, just straight hip-hop. The Minstrel Show, their second full-length album and first major label release (on Atlantic Records) marks a more mature and pensive trio that has a lot to say.

They recently sat down with HHDX to promote their upcoming project and reflect a little on the current state of affairs, being the G-Unit of the underground and of course, world domination.

Your album is called The Minstrel Show. When I interviewed Paul Mooney, he spoke at length about how so many people still have that slave mentality and don