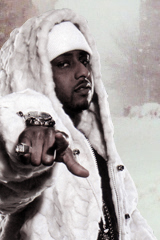 Capone: Glory In The Pain

Though Capone, of CNN fame was physically freed from prison five years ago, his solo debut is just now seeing the light of day. The N in CNN Noreaga is Capo’s more well-known partner in crime. Nore has made himself somewhat of a Hip Hop name…where Capone, who critics and fans alike say has the better flow is building off of his rep and recognizable voice with the drop of Pain, Time and Glory

Powered by a list of all-star collaborators, Akon, Devin the Dude, Scarface, Raekwon, C-Murder, Butch Cassidy and Peedi Crackk and production from the Heatmakerz, Twinz, Screwface and DJ Absolut, Capone claims his CD, Pain, Time & Glory, like the new GT out now, is well-worth the wait. Here, he reports about his own company, how hip-hop started in Queensbridge and his plans in two years, when his two felony charges are wiped clean.

This is your first album in five years. What