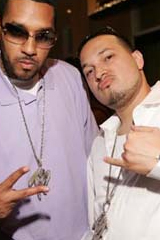 Fame and fortune have finally caught up with Cool & Dre, the

Sure, they executive-produced Crack‘s latest solo release, Things Of That Nature, but they also have their own imprint, Epidemic Music with their own artists, Dirtbag and Tony Sunshine and have been crafting new hits for everyone from Joe Budden and Ginuwine to Trina and Mase. They are the official beatmakers for NBA Live 2005 and own a restaurant in South Beach. Ah, the good life!

Do you feel that your Ja Rule record, “New York” has changed your status as producers?

Cool: We’ve been bubbling in the game for a minute now.

Dre: We’ve always been the next guys. For three years we’ve been making beats to satisfy what people want to hear instead of being able to give them what me and Cool want to. The Ja Rule record is our sound. The fact that we’re from Miami and we wrote that hook for him and did the beat. For us to give him that record that made him that much more relevant. This record is such a big look for him. But Ja Rule and Irv gave us a look on The Last Temptation. We did the track “Destiny.” They always showed us love. Now we’re feeling like finally Cool and Dre have arrived.

We made news when we did the Dirtbag deal. A $2 million label deal in a time when no one’s getting that kind of money. We had Interscope, Shady, Def Jam, Atlantic and Jive [courting us]. And for us to be in the game for 2-3 years, everyone said we’ve accomplished so much in so little time for producers without hit records. Finally, we got an opportunity to put our sound out there and it’s been received so well. The confidence it gives you as a producer. Cool always used to say I pity the producer who makes a hit record off of a fluke.

Tell me about your imprint, Epidemic Music.

Dre: Dirtbag is our most important priority. Getting that off the ground. Tony Sunshine is priority #1 too. But our whole deal was on the strength of Dirtbag. He has a single we produced, “Slow Down Little Buddy.” He has production by Jazze Pha, David Banner, features with Young Buck, Devin The Dude, Fat Joe, Trick Daddy. Then we’re going to come with Tony Sunshine. His first single is produced by Scott Storch and Lil’ Jon. We executive produced Fat Joe‘s latest. Remy Martin. We did a record on Game‘s album with 50. We did two records on Mase‘s next album. Murda Mase is back.

How did you hook up with Fat Joe?

Cool: Our friend said Fat Joe was looking for some beats for his new album J.O.S.E. So me and Dre put together all the beats we had, like 60 on one CD. Our friend told us that while R. Kelly was recording the vocals to “We Thuggin,” it was takin’ forever, so Joe put in our CD.

Cool: Joe drove down to Miami to meet us. He couldn’t believe we were from Miami. He recorded it with us. Every time he came to Miami we would hang out and we got real close. Through being with Joe in the studio, that’s how we hooked up with a lot of other people. The music speaks for itself.

Dre: Our personality, we’re blessed. We don’t dick nobody over. The fact that we’re good dudes, we got close to Joe. If me and Cool were shady, I don’t think our relationship with Joe would have popped off. A lot of people like to vibe with us. They like our energy. I think our personalities have a lot to do with us being successful. We’re good guys. We’re on time to the studio. And we have good beats and we’re on the grind.

How did you guys get your start?

Dre: We sang in a group and nobody was trying to make our beats. That’s part of what made me and Cool make beats. The group broke up. And me and Cool kept producing. We had our own little act that we were trying to jump off. We were trying to emulate Organized Noize the way they put out OutKast, Goodie Mob and all those people. They were huge influences on us. Sleepy Brown He’s the guy that really put that falsetto into hip-hop. A lot of people mistake it for other people. He doesn’t get credit for it. We get comparisons to the Neptunes. We’re huge fans of them. It’s a great compliment. Some people think we bite, but really our inspiration is Organized Noize.

Where do you think your entrepreneurial spirit comes from?

Cool: Me and Dre have been through so much in this music business. That whole independent label stuff in Miami. Promoting our own records. Going to the clubs, getting DJs to try to play them. Doing our own graphics for the CD. We’ve been through every step.

Dre: Cool couldn’t work for nobody. I had 9 to 5s. Cool has never worked for anyone in his entire life.

Dre: Now we have to make sure we don’t run something into the ground. We move with it, make it hot and then go left and take it to a new place. We have to innovate and come with something new. Timbaland did it, the Neptunes, Kanye, Swizz. Our main mission right now, and biggest challenge is to keep this high beam on us. Keep ’em following us.